By Trish Audette-Longo | News, Politics | December 13th 2018
#89 of 116 articles from the Special Report: State of Journalism 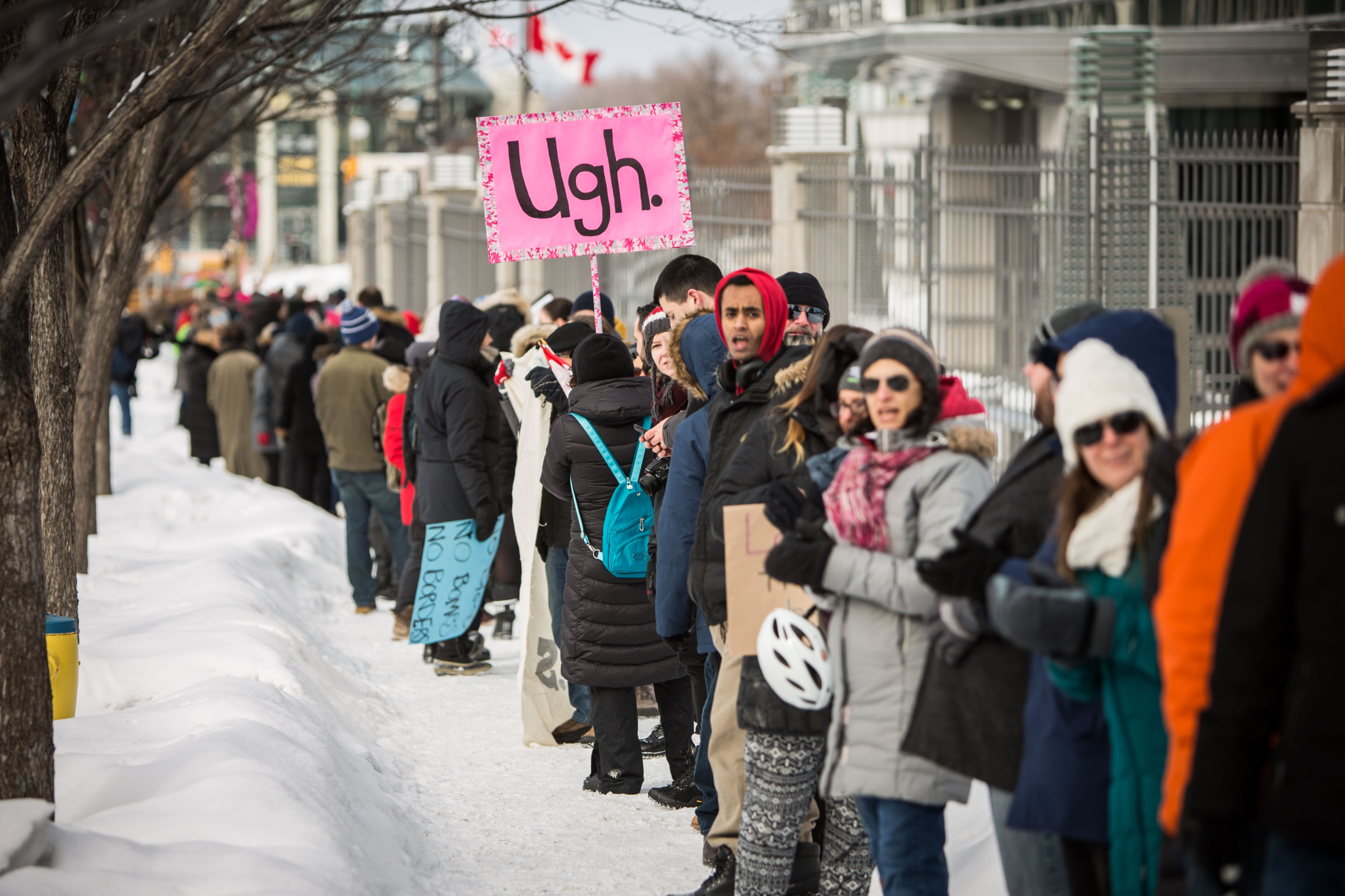 Protesters line up in front of the U.S. embassy to demand President Donald Trump remove a travel ban on seven Muslim-majority countries in Ottawa on Jan. 30, 2017. File photo by Alex Tétreault
Previous story
Next story

The Toronto Sun committed a “serious breach of journalistic standards” for publishing a column that falsely reported refugees were slaughtering goats at a Scarborough hotel, said a self-regulating Canadian press council in a scathing statement released on Thursday night.

“The (council) supports the wide latitude afforded to opinion writers to express unpopular views, but is of the view that columnists must adhere to the journalistic standards of the news media organization, including commitment to accuracy,” the National NewsMedia Council said in the statement.

The NewsMedia council oversees ethical practices among English-language media in Canada. It reported receiving seven complaints about the Sun column, which used a review posted on the travel website TripAdvisor as the source of information about goats being slaughtered.

The press council said it focused on one representative complaint, which zeroed in on the problem of using the crowd-sourced site as a sole source. The complaint also argued the column was hateful, racist and linked to an act of arson at a Toronto hotel.

The Toronto Sun, part of the Postmedia chain of newspapers, was heavily criticized soon after the column was published. The executive director of a refugee claimants service in Toronto told The Canadian Press that he believed the hotel arson “targeted” asylum seekers as a result of misinformation on TripAdvisor and elsewhere.

The decision was released just as the Toronto Sun was struck by a new controversy after removing the name of the incoming OPP commissioner from quotes in a column that was defending the Ford government against allegations of political interference.

It took issue with referring to TripAdvisor as a “reputable” source, giving it credibility “even as the columnist was unable to confirm or deny any of the information reported from that source.

“Neither did the writer describe any attempt to visit the hotel, verify the claim, or offer any caution about the failed efforts to do so. The NewsMedia Council views this as a serious breach of journalistic standards for accuracy in reporting.”

Responding to a tweet from Canadaland that the press council had called her out, columnist Sue-Ann Levy wrote, "Of course they did" on Twitter Thursday night.

Of course they did.

On Oct. 28, weeks after the first column was published, Levy wrote another explaining how she drew upon sources from TripAdvisor, and how she followed up on the online reports.

"I quoted a number of online posts from TripAdvisor from people claiming to have been guests at the hotel and who variously described it as an 'absolute zoo,' a 'madhouse,' 'dangerous,' dirty, noisy and full of loitering refugees. One post I quoted was by a guest who claimed Toronto Animal Services needed to be called to the hotel because 'some goats were being slaughtered' in public bathrooms," Levy wrote.

"Those columns provoked online outrage, particularly from progressive shills determined to conflate reporting on what amounts to the abandonment of refugees we’ve accepted into our country with racism and anti-Islamic sentiment. This is par for the course for the hectoring, far left ideologues who live in the toxic and hysterical Twitterverse, and the far left echo-chamber digital media outlets who fuel the mob’s half-baked conspiracy theories."

She acknowledged the post about goats being slaughtered was wrong, but said critics' anger should be aimed at refugees' living conditions, costs to taxpayers and politicians.

The Sun’s acknowledgment that it had made a mistake by not telling people about its unsuccessful attempts to verify the TripAdvisor claims was not enough, the press council said Thursday. “Citing an unsubstantiated post from a crowdsourced platform as evidence is akin to citing a rumour.”

In a statement, Postmedia said that it accepted the council's findings.

"We agree with the council that columns must be factually accurate, although we give our columnists wide latitude in expressing their opinions," wrote Phyllise Gelfand, vice-president of communications, in an email sent to National Observer on Dec. 14, after this article was published. "As the NewsMedia Council notes, we acknowledged the error in the original article and removed the false information, alerting readers to the fact in a subsequent article."

If it wasn’t possible to prove the TripAdvisor claims were true, the story wasn’t ready to be published, the press council argued.

The version of the column available online on Dec. 13, 2018 is free of the goat slaughter claim, except in a correction which reads: “The original version of this column referenced a (TripAdvisor) post that wrongly claimed goats were being slaughtered in public bathrooms at the hotel.”

The press council flagged a “lengthy delay in updating the error in fact” as “concerning, particularly given polarization around the refugees issue.” It also argued that, had the Sun done its fact-checking work before publication, “no correction would have been required.”

About the follow-up article that explained what evidence was found to support the TripAdvisor comments, the press council said, “these basic journalistic standards of seeking accuracy were noticeably lacking in the article that was the subject of complaint.”

The current version of the Sun column continues to refer to migrants as illegal, a term the council said, “may not have been racism, but was inflammatory in the context of a racially charged topic.”

The press council said it was concerned about the use of the word illegal with reference to asylum seekers.

“The NewsMedia Council remains concerned about the journalistic ethics of using unsubstantiated and pejorative terms to describe people who are vulnerable targets in a highly polarized political and social environment.”

Oh, Canada don't be smug. What happens in America can spill across the border

Even though she deflects any

Even though she deflects any responsibility. Paraphrased, "Sure I got the fact wrong but there's still all these dirty refugees loitering in this filthy place." Morally bankrupt.

Throughout its chequered history, the Sun newspaper chain and parent company Post Media, have seemingly delighted in wilfully provocative and misleading reporting and opinion pieces. Often hard to distinguish one from the other. Similar tactics have been employed in its more upmarket rag - The National Post. Criticism loses its sting when it proves to be based on false information or suspect sources. Their disreputable newspapers, like the Fox empire have done much to destroy trust in journalism. This cannot be in the interests of the newspapers/media themselves - so who benefits?

I suppose the biggest

I suppose the biggest question I'm left with after reading both this story and the NNMC's statement is a great big "SO WHAT?"

So the Council "upheld a portion of the representative complaint" and wagged a stern finger at the Sun for a raft of egregious journalistic failures... that's nice, but is there any actual consequence for writing or publishing something so outrageous it (indirectly at least) inspired a firebombing attempt on the hotel in question? If there are, Ms. Levy doesn't seem to feel them, judging by her Twitter reply let alone her follow-up article. The Sun belatedly corrected a few details, but presumably no other response worth mentioning here. So then really, I'm genuinely curious, what's the point of any of it?

Nope. No consequences. Just as hardly anybody noticed the minimal corrections, hardly anybody will notice this censure. Seems to me that only significant financial penalties would speak in this newspaper's language; the Sun might benefit from frequent and vigorous libel suits.