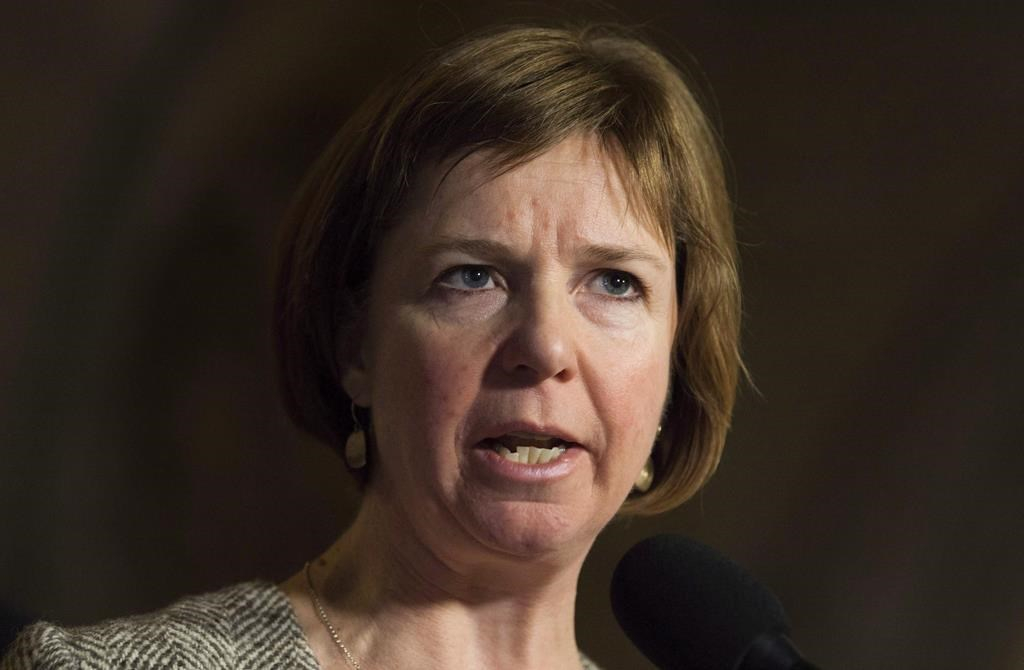 NDP MP Sheila Malcolmson speaks with the media about her private members bill regarding abandoned vessels, in Ottawa on Thursday, November 30, 2017. File photo by The Canadian Press/Adrian Wyld
Previous story
Next story

British Columbia's minority New Democrat government faces a crucial popularity test this month in a byelection in one of its traditionally safe constituencies where the outcome could threaten Premier John Horgan's one-seat hold on power.

Voters in Nanaimo, who have elected New Democrats in 13 of the last 15 provincial elections, are heading to the polls Jan. 30 to replace Leonard Krog, the five-term NDP member of the legislature who resigned his seat last year after being elected mayor of the Vancouver Island city.

Krog's vacancy at the legislature makes the tight seat count even more tenuous for the New Democrats, who formed government in 2017 by reaching a partnership agreement with the three members of the Green party.

There are 40 New Democrats, three Greens, 42 Liberals, one Independent and one vacancy in the 87 seat legislature.

If the Liberals win, the legislature will be at a 43-43 tie, with Speaker Darryl Plecas — a former Liberal who now sits as an Independent — forced to cast tie-breaking votes.

An NDP win would preserve the minority government's status.

Prof. Mark Blackell, who teaches Liberal Studies at Nanaimo's Vancouver Island University, said the city is known as an NDP stronghold, but the name recognition of the Liberal, Harris, and the Green's Ney will challenge Malcolmson and the NDP.

"Nanaimo has undergone gradual changes in the past several decades due to a changing economy, one that has become more service-oriented, and due to people moving here, often to retire and, more recently, younger people from the Lower Mainland to find more reasonable housing," he said.

"While many who have settled, especially from Alberta, bring more conservative or B.C. Liberal Party allegiances, there has also been a growth in Green party support, largely in the younger population."

Harris, the Liberal candidate, said every candidate is aware of the high stakes in the byelection, but it's also an opportunity for the often neglected city to garner well-deserved attention.

Nanaimo, located on the east coast of Vancouver Island about 110 kilometres northeast of Victoria, is a port city with coal mining and forestry roots. More than 90,000 people live in the city.

Harris said Nanaimo has been left out of the political picture for too long.

"We certainly need to have a more comprehensive vision to allow whatever party is in power to figure out how to advance the interests of Nanaimo," he said.

He acknowledged the riding did not receive enough attention from the former Liberal government, but said the NDP also didn't pay enough attention to Nanaimo, keeping Krog out of Horgan's cabinet.

"That's just sort of the metaphor for the attitude towards Nanaimo," he said. "We can be overlooked. We can be taken for granted and we'll just continue marching on."

But Harris, a sixth-generation resident, said he represents the resilient spirit of the city and he wants to bring bold change to Nanaimo.

Green candidate Michele Ney said her roots in Nanaimo are as deep as Harris's and her vision also looks to the city's potential.

She is one of former Nanaimo mayor Frank Ney's 11 children.

Frank Ney served as Nanaimo's mayor for 21 years. He was also elected to the B.C. legislature for one term.

A bronze statue of Frank Ney stands in downtown Nanaimo and the flamboyant businessman was known for bringing thousands of tourists to the city with its famed bathtub races.

"Apples don't fall far from the tree," said Michele Ney. "I have a vision for Nanaimo. I have this vision where we're going to be a leader in a clean economy."

Ney said she can't escape her father's legacy and much of her time door knocking during the campaign is spent reminiscing about her father.

"He was always talking to people no matter who they were," she said. "If there was such a thing as Green in his lifetime or if he was still alive today, he would be voting Green."

The NDP's Malcolmson said her team is deeply aware of what's at stake for the government, but she's focused on the riding.

"Talking with people on the doorstep is where I get my best advice and my best read on the actions of John Horgan's government so far," she said. "It's the real deal what you hear on the door steps."

Malcolmson, who resigned her federal seat as Nanaimo's MP to run provincially, said she's hearing from people with concerns about health care, child care and education.

"On the doorstep, I'd say it's also the sense of urgency of how the Liberals let housing prices get so out of control. How they let the homelessness crisis spiral in Nanaimo," said Malcolmson who lives on nearby Gabriola Island.

Richardson, an economist and a former Conservative MP from Ontario when Joe Clark was prime minister, said he wants Vancouver Island to become Canada's 11th province.

"We would be 100 times better off as a province than a region," said the candidate running for the Vancouver Island Party.

He also said if he wins the byelection he would hold the balance of power in the legislature.

Walker, the Libertarian, said he's campaigning for individual rights and freedoms and "freedom from government oppression."

The Conservative candidate could not be reached for comment.