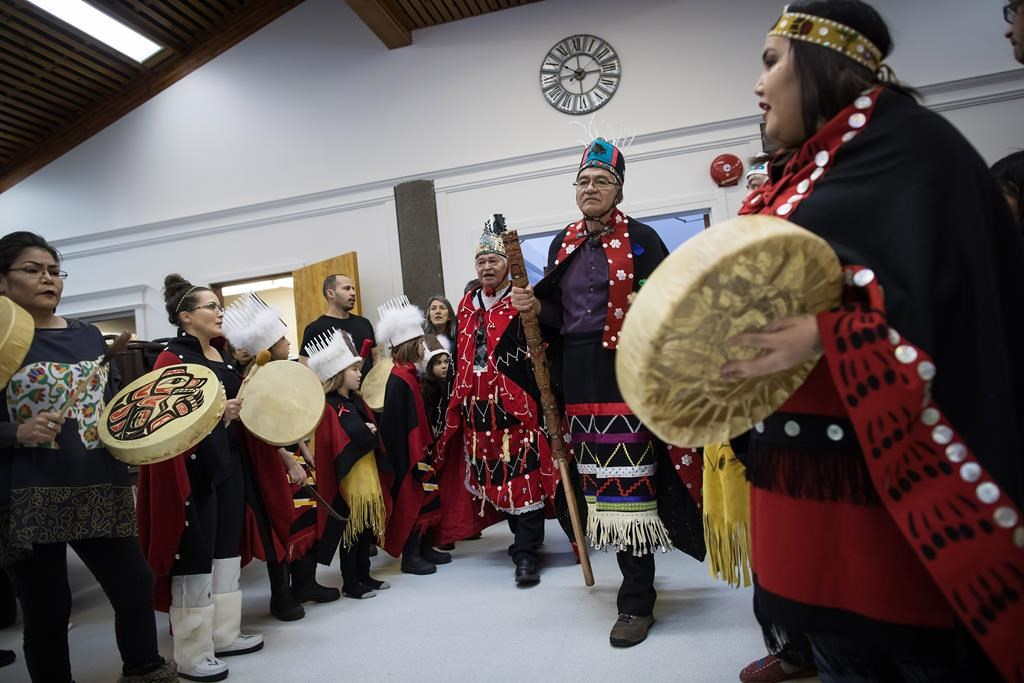 Chief Namoks and Chief Madeek enter the room as Indigenous nations and supporters gather to show support for the Wet'suwet'en Nation before marching together in solidarity, in Smithers, B.C., on Jan. 16, 2019. File photo by The Canadian Press
Previous story
Next story

It was a difficult decision to sign a benefit sharing agreement with Coastal GasLink that would allow for a natural gas pipeline through the Wet'suwet'en territory, but a necessary one, an elected band council member says.

Joseph Skin is with the Skin Tyee band, a community of about 134 people within the Wet'suwet'en First Nation, and said many members live in "poverty" on the reserve and the agreement offered an opportunity for a better future.

Skin said he spent most of his life living in a home shared by three or four families. There was no running water in homes on the reserve until 10 or 15 years ago, he said.

"Decisions like this never came easy, I'm not going to say it was easy, because it was very difficult," he said.

"But like I said, the people who are concerned about our decision, they should come to the reserve and live in these conditions themselves and then have to weigh in on a decision like that."

Coastal GasLink has said it has signed agreements with all 20 elected First Nations bands along the pipeline route from northeastern B.C. to LNG Canada's $40-billion export facility on the coast in Kitimat.

A blockade and the subsequent RCMP arrests while they enforced an injunction earlier this month set off a firestorm of protests across the country. The blockade was erected to stop the company from accessing a road where it planned to start construction work.

The hereditary chiefs have since reached a "temporary truce" with RCMP, agreeing that members will abide by the injunction allowing the company access through the end of January, so long as another anti-pipeline camp is allowed to remain intact.

At a rally in support of the five hereditary clan chiefs in Smithers, B.C., last Wednesday, representatives from several other First Nations stood up in solidarity against the project. Some held both hereditary and elected chief titles.

Ayla Brown, an elected councillor with the Heiltsuk First Nation said the division between hereditary and elected leaders has been overstated, and both share the goal of bettering their communities.

"We're here to say we stand with you," she said. "There is no division here."

Former Wet'suwet'en elected Chief Ray Morris of the Nee Tahi Buhn band said his council signed a deal with Coastal GasLink based on the advice an elder gave when Enbridge was proposing a pipeline through the territory. That elder died at 96 in 2013.

"He was with us when Enbridge first came around and he said, 'You can't beat this big company. Get the best deal you can for us.' And that's what we did," said Morris, who was the elected chief for 24 years before being unseated in an election last month.

Signing an agreement means funding for things like education and elder care, he said.

"We're no different than any other human, we have the same needs as you do."

Morris said even though band members share lineage with the hereditary clan chiefs, that doesn't mean they are under the same authority.

"We're independent of the Office of the Wet'suwet'en hereditary chiefs," he said. "We've been independent for many years."

Brian Michell, an elected councillor with the Hagwilget village of about 200 to 230 people in Wet'suwet'en territory said the company approached his council about seven years ago.

The village council never got as far as hearing a dollar figure because they refused to entertain the idea of an agreement, Michell said.

"Our village chief and council, we're dead against, we can't sign for something that we can't control. It's a hereditary system, we're an elected council," he said.

The elected council can only make decisions within the village boundaries, which are not along the pipeline route, he said.

"We couldn't put a price tag on our hereditary system," he said.

Some First Nations in BC

Some First Nations in BC explained why they agreed to a pipeline in their territory. The reasons in British Columbia are the same as those in Ontario : Native children receive less funding for schools than other kids. Housing is sub-standard. Water & Sewage facilities are inferior or non-existent. In other words they live in poverty while WE live off the wealth of their Land. The United Nations Deceleration on the Rights of Indigenous Peoples demands consultation about dangers and benefits for all parties before CONSENSUS leads to agreement.

There are no less than three

There are no less than three major problems with this getting the kind of United Nations attention and world-wide media sympathy attracted by, say, the Ogoni People of Nigeria:

2) Damages done. The Ogoni lands have 45 documented major spills; half of them since 2011, it's very recent and ongoing. A natural gas pipeline can have leaks, but no "spills" per se. Even Canada's oil and bitumen spills to date have been very small by comparison to other stories around the world.

3) Attempts at compensation. The Ogoni have received very little, not even good-faith efforts at cleaning up all those spills. Then people read that a tiny band of 150 people was offered $13 million. In the same story you read about 10 people living in the house and think, "well, that's $866,000 for the ten of them, that's a couple of houses, with power and water"...

...and, bluntly, you turn back to reading about the Ogoni.

I won't even put down "the 2500 people don't have political unity on this, some of them want to settle". It's actually pretty minor compared to the above three things.

I really wouldn't count on a chorus of support from around the world for this issue; I don't think it will come.