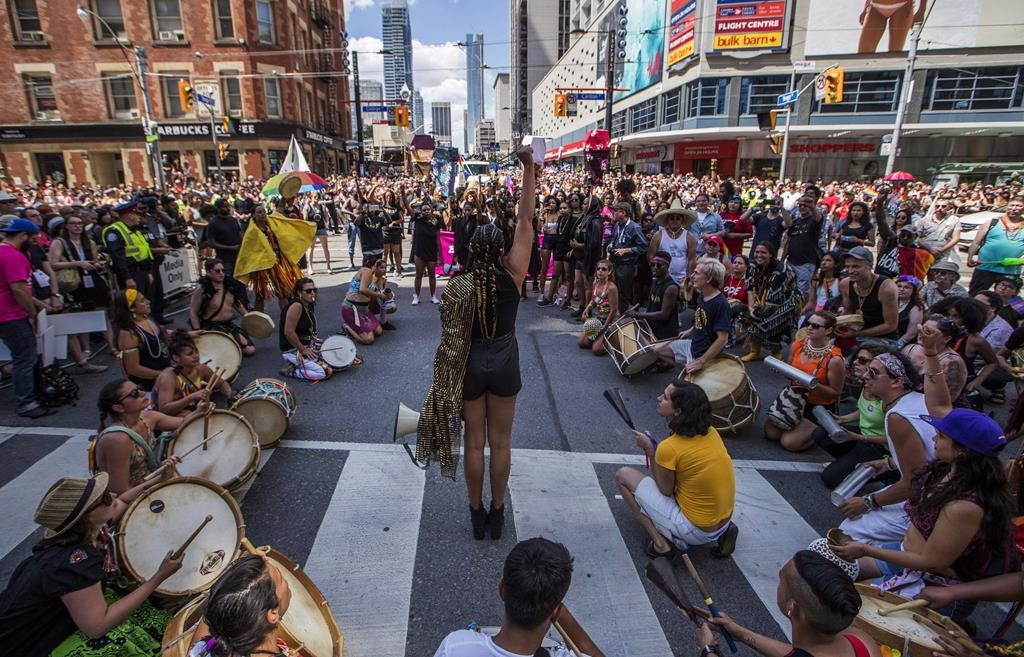 People from the Black Lives Matter sit on the ground to halt the annual Pride Parade, in Toronto on Sunday, July 3, 2016. File photo by The Canadian Press/Mark Blinch
Previous story
Next story

Uniformed police officers have been indefinitely barred from participating in Toronto's Pride Parade after a close vote that Pride Toronto said showed a deep division within the city's LGBTQ community.

On Tuesday night, Pride members voted 163-161 to keep uniformed officers out of the parade. Officers can still march, but not in uniform.

"What this vote has told us is we need to better understand what this community feels about police services and how they feel it negatively impacts their lives and so that's what we're going to try to do," said Olivia Nuamah, executive director of Pride Toronto.

She said they plan to use a recent $1.25-million federal grant to fully examine the LGBTQ community's feelings on police and a way forward.

"We are going to use this award we received to map out what that reconciliation process might look like," Nuamah said, adding that they are planning to gather extensive data from the community about the issue.

The members' decision means police will be out of the festivities indefinitely, she said. Another vote would be needed to allow uniformed officers back in.

Mayor John Tory said the result of the vote was "deeply disappointing."

"I believe the police should be in Pride," Tory said to reporters Wednesday.

He said both Nuamah and police Chief Mark Saunders have been constructive in their efforts to repair the long-broken relationship between police and the LGBTQ community and he wants both sides to continue working until they find a solution.

Nuamah agreed with the mayor.

"I think something does need to be done about it sooner rather than later," she said. "I don't think anybody is truly happy."

The vote comes about three months after the organization lifted a ban on uniformed officers taking part in the annual summer event, saying the force was welcome to apply to be a part of this summer's festivities.

The relationship between Pride Toronto and city police has been tense for the past two years.

Uniformed officers were first banned from the parade in 2017 over concerns of racial profiling, and again in 2018 over criticism the force had not taken the disappearances of several men missing from the city's gay village seriously.

In a statement Tuesday, Toronto police said they "remain committed to maintaining a dialogue with Pride Toronto as well as the larger LGBTQS community to deliver policing services that are inclusive and responsive to the needs of the community regardless of the outcome of one particular vote or event."

In 2016, Black Lives Matter abruptly halted the Pride Parade march, demanding that uniformed police, their floats and cruisers be excluded. The group cited tensions between the force and black citizens arising from racial profiling as among the reasons for their demands.

Pride organizers agreed for the next two years to exclude uniformed officers on-duty from marching in the parade.

For this summer's event, organizers have also cited ongoing anger about perceived police inaction on the gay village disappearances as a reason police could not participate. A 67-year-old self-employed landscaper, Bruce McArthur, was arrested last year and charged with eight counts of first-degree murder in those disappearances.

The community had long ago sounded the alarm on a suspected serial killer preying on men in the gay village.

— With files from Daniela Germano