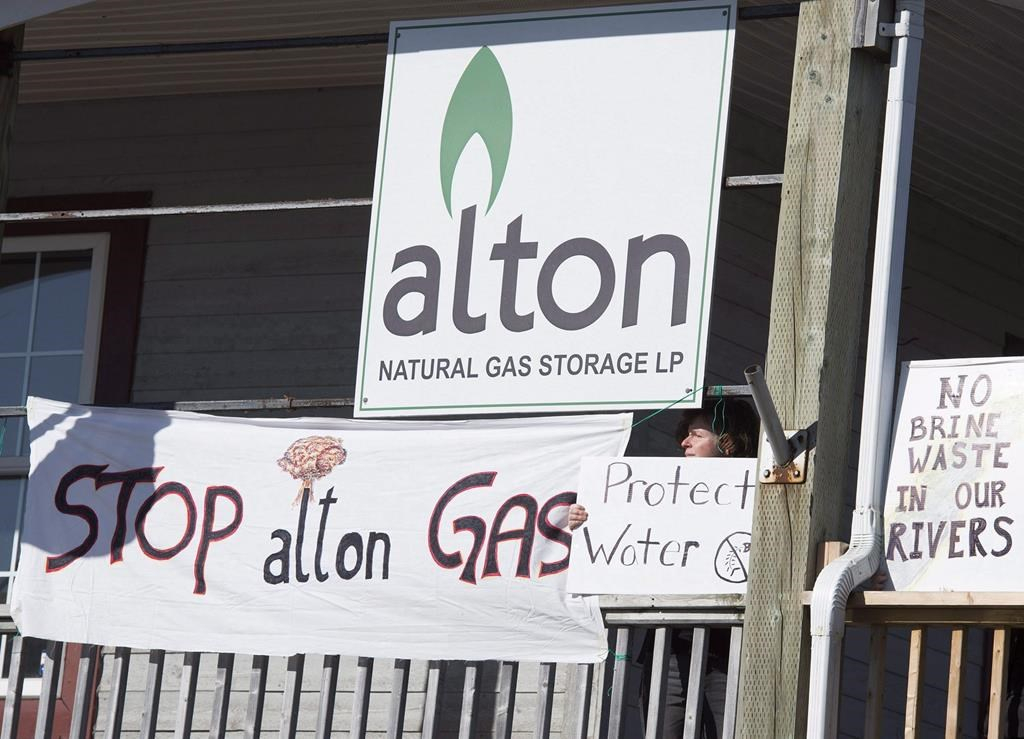 The federal government is stepping in to regulate a company's controversial plan to use water from one of Nova Scotia's major rivers to create huge underground caverns to store natural gas, but a Mi'kmaq leader says Ottawa's move doesn't go far enough.

Environment and Climate Change Canada says the proposed regulations for the Alton Gas project will be aimed at managing potential threats to fish, fish habitat and human health.

However, Millbrook First Nation Chief Bob Gloade said it appears the department has already decided to grant the company an exemption to a provision in the Fisheries Act that bans depositing so-called "deleterious substances" into waterways frequented by fish.

"It seems like it's just a quick approach to rubber-stamp this without proper engagement, consultation and evaluation of the implications of this," Gloade said in an interview Thursday. "It's to accommodate one company's ability to move forward on a particular project."

Federal officials could not be reached for comment, but the company issued a statement saying it is committed to safe operations that will protect the Shubenacadie River.

"As designed and operated, we are confident that Alton will not have an impact on fish or fish habitat in the Shubenacadie estuary," the company said.

For the past 12 years, Alton Gas has been planning to pump water from the river to an underground site 12 kilometres away, where it will be used to flush out salt deposits, creating up to 15 caverns.

The leftover brine solution would then be pumped back into the river over a two- to three-year period.

The project has been on hold since protests started in 2014, and a protest camp was set up near the river two years later.

A protester at the camp declined to comment when reached Thursday. Calls to other protest leaders and members of the nearby Sipekne’katik First Nation were not returned.

However, Gloade made it clear he's worried the project will damage the 73-kilometre tidal river, which runs through the middle of mainland Nova Scotia.

"They are giving them the go-ahead to do it without knowing ... that the salinity content is not going to raise above a certain point," he said. "This is not something that has happened before, so they can't given any assurance that it's not going to cause any harm."

Alton Gas says it has scientific studies showing the brine will not hurt the environment.

"Brine release at Alton has been extensively studied, both during the project's provincial environmental assessment and the independent review led by the Mi'kmaq — the recommendations from which we are fully committed to implementing."

"That being said, we appreciate that some people continue to have questions about the brine release process. We continue to engage with project stakeholders with respect to questions they may have, and we are open to the development of the new regulation by Environment and Climate Change Canada."

The federal department says regulations under the Fisheries Act, due later this year, will establish "conditions on any brine releases."

"The project is designed to ensure that the salt concentration ... (in) the river would not exceed the highest naturally occurring salt concentrations in the river," the department said in a notice of intent posted Monday on its website.

"The objective of the regulations under consideration is to manage the risk of potential threats to fish, fish habitat and human health from fish consumption."

Veronica Petro, a spokeswoman for the department, said in a statement that the regulations will be developed "in consultation with Nova Scotia and Indigenous Peoples."

Last Friday, Alton Gas applied to the Supreme Court of Nova Scotia for an injunction that would order the removal of protesters from the riverside site near Fort Ellis, N.S.

The company says it wants the RCMP to remove "trespassing" protesters who have "consistently" blocked access to the site.

The company has insisted it has consulted with local Indigenous people, and the provincial government has agreed.

More importantly, the company says it has already secured the permits it needs to start pumping water from the river.

But the delays are adding up.

The company, a subsidiary of Calgary-based AltaGas, had initially planned to have construction completed between 2013 and 2018. However, the company recently asked the Nova Scotia Utility and Review Board to extend its cavern construction permit to Sept. 1, 2023.