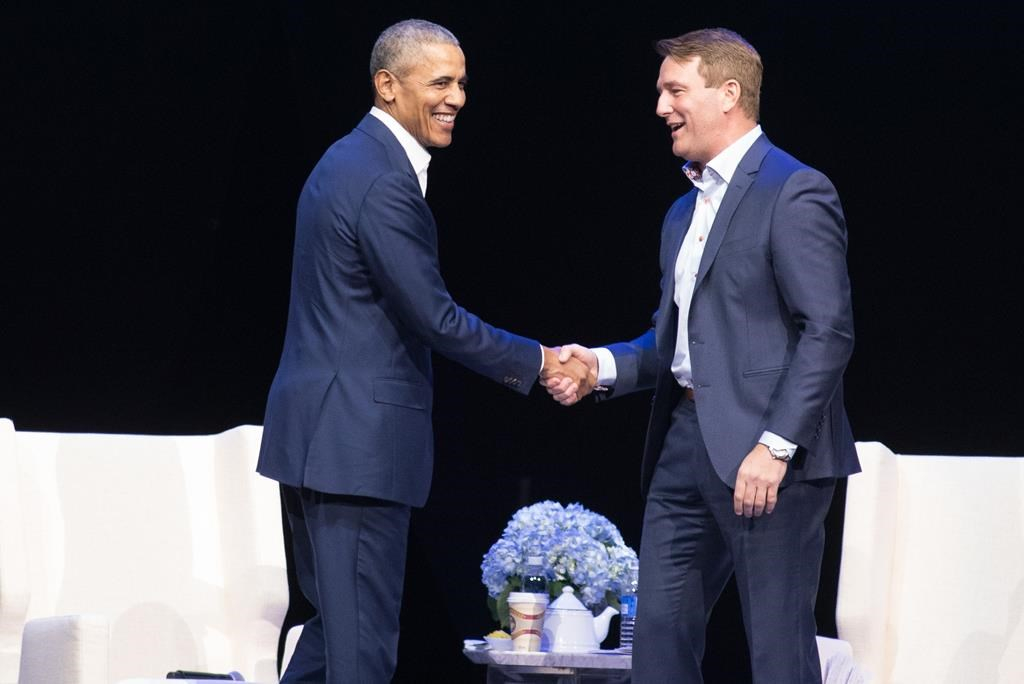 Barack Obama says there is a danger in the United States and around the world with politics being driven by passions disconnected from facts.

"I think the danger that we have sometimes now in our politics in the United States, and what I'm seeing internationally, is us being driven by passions, and (we) are disconnected from facts, that in fact deliberately are shielded from facts and reason and logic," Obama said in Winnipeg on Monday evening.

"And what is supported is a story of us being right and them being wrong."

The former president spoke to a sold-out crowd of 13,500 at the Bell MTS Centre during the first Canadian stop of the "Conversation with President Barack Obama" tour on Monday evening.

Obama reflected on entering office during the global economic crisis of 2007-08 and said he had great confidence that if the government made smart decisions — relying on facts, reason, logic, evidence and science — the country could largely recover.

"If we had a crisis today, I am concerned about the — at least the United States — that we may not be able to … figure something out in a common-sense, practical way."

Trump has faced criticism for allegations of making false statements, including the size of the crowd at his inauguration, about a trade deficit with Canada and voter fraud. Most recently the president has faced backlash over declaring a national emergency at the U.S.-Mexico border.

Over about an hour, Obama answered questions from Michael Burns, CEO of the Princess Margaret Cancer Foundation, about topics as varied as his childhood, racism, his time in office and his relationship with former Vice President Joe Biden. He spoke about his wife, Michelle Obama, and her best-selling book, as well as his daughters, and weeping often as he becomes an "empty-nester."

"One of the things that Michelle and I are proudest of during our presidency is we raised women who are kind and thoughtful and aware."

Obama said speaking with young people and seeing the change they are pushing for gives him hope in his post-presidency work. He said he hopes to connect his foundation with that generation so it will become a "university for social change" as he enters the third act of his life.

He said he was more politically aligned with Trudeau but worked successfully with both because the U.S. and Canada are like cousins and the countries are bound together culturally and economically.

"Americans come up here when they get too frustrated with stuff," Obama said to generous applause.

The 44th president went on to joke about numerous calls he received from both Canadian leaders about the lumber industry, adding he was spending less time "pouring over the lumber charts."

"You had that whole Canadian thing where certain things are important to you that nobody else cares about," he said with a laugh.

Many Winnipeggers who attended the event said it was important to listen to the former president, especially in the current global political climate.

Fatima Demelo said she is worried about growing divisiveness, especially on social media. Obama is able to cross over different boundaries, she said, and find the things that connect people.

"Hope is a powerful thing and I think he reminds of us that."

Reflections on one of this year's most painful photographs