Airlines, agencies struggle to respond as passengers rush to rebook after jet ban 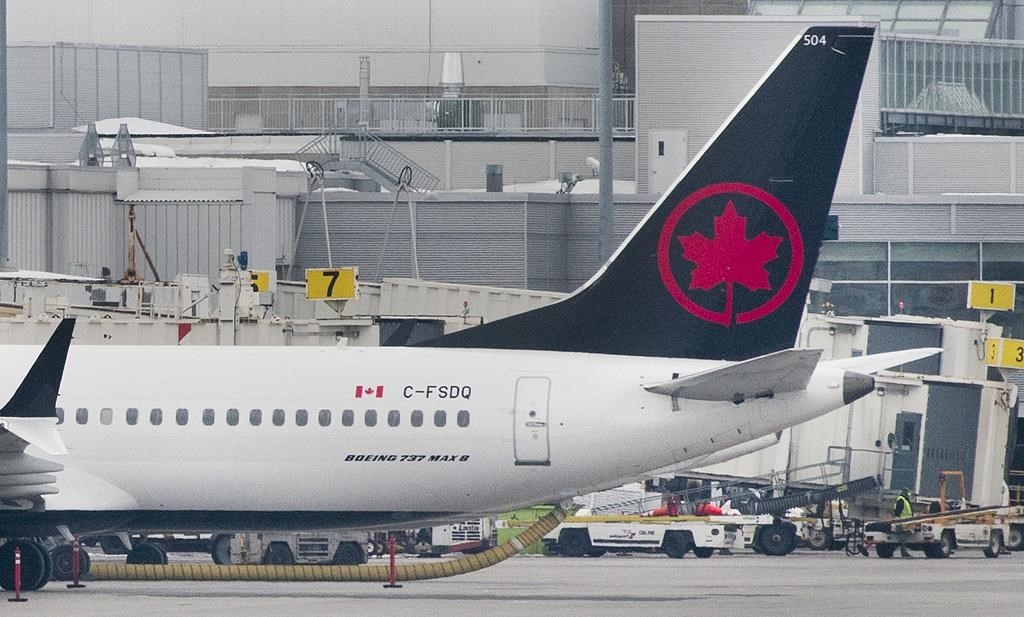 An Air Canada Boeing 737 Max 8 aircraft is shown next to a gate at Trudeau Airport in Montreal, on Wednesday, March 13, 2019. Photo by The Canadian Press/Graham Hughes
Previous story
Next story

Canada's largest airline was inundated with calls as travellers scrambled to rebook flights after Ottawa joined dozens of countries in grounding the Boeing 737 Max 8 aircraft Wednesday.

Calls to Air Canada's customer service line Wednesday and Thursday prompted a recording that said call volume has temporarily exceeded the company's capacity to answer or even place callers on hold.

Kimberly Yetman Dawson, visiting family in Ontario, said she booked a second return flight to Halifax this Saturday at double the cost due to confusion over whether her original trip — scheduled initially on a Max 8 — would go ahead.

"I'm hoping that I'll be compensated or I'll be credited," she said. "It's a schlimazel. It’s up in the air."

Air Canada said it will waive cancellation charges and rebooking fees for Max 8 flights within three weeks of the original travel date.

The Montreal-based company has 24 Max 8s that carry between 9,000 and 12,000 passengers daily. The jets fly popular routes including Vancouver-Calgary and Montreal-Los Angeles as well as to Mexico, the Caribbean and Hawaii, causing headaches for thousands of March break vacationers and travel agents.

Maninder Singh, the owner of InterSky travel agency in Montreal, said the ban will cost him cash as he refunds passengers whose flights have been cancelled.

"Obviously we lose our markup," he said. "We have to call every single [Max 8] customer and check for alternate dates."

Transport Minister Marc Garneau said the decision to ground the planes was a precautionary move made after a review of the available evidence in the wake of the Ethiopian Airlines disaster Sunday that killed all 157 people on board, including 18 Canadians.

WestJet Airlines Ltd., which has 13 Max 8s that fly to destinations in Florida and elsewhere, said 11 domestic flights were cancelled Thursday, impacting 1,200 passengers.

More than three-quarters of those travellers would be rebooked on flights Thursday, with the remainder departing Friday or Saturday, the airline said.

The Calgary-based company has a no-fee cancellation policy for Max 8 flights, though rebooked flights may cost more.

Both airlines say customers will not be compensated for accommodations.

"As time progresses we're going to have a lot more recovery options."

The airline hopes to hang on to several Embraer E-90 and Airbus A320 planes that were slated to exit the fleet this month, Gallardo said. Slashing the number of flights and swapping in bigger planes and reserve crews is another strategy, along with rerouting passengers through other airlines, but the options all come at a cost.

More than 40 countries, including the U.S., China and all European Union states, have now grounded or banned the Max 8 from their airspace over safety concerns and possible parallels to an Oct. 29 incident which saw the same type of aircraft plunge into the Java Sea, killing 189 people.

Mary Jane Hiebert, who chairs the Association of Canadian Travel Agencies, said the virtual blanket ban on the more than 375 Max 8s in service across the world will snarl up the global flight grid.

"There are connecting flights, there are alliance partners. So you take an Air Canada plane to a certain destination, you get on a Max 8 with United Airlines or another carrier — except you can't now."

Pilots, flight attendants and mechanics are trained to work on specific types of aircraft, which could make staffing and maintaining the replacement aircraft more difficult, Hiebert said.

Andrea Carr-McNeill, director of marketing with The Travel Store in Charlottetown, said the travel agency has been inundated with customer calls over the past 24 hours.

"We've got six offices in the Maritimes and we've stopped counting; there's been that many," she said.

"Patience is a virtue that every one of us needs to have right now."

— With files from Alison Auld in Halifax