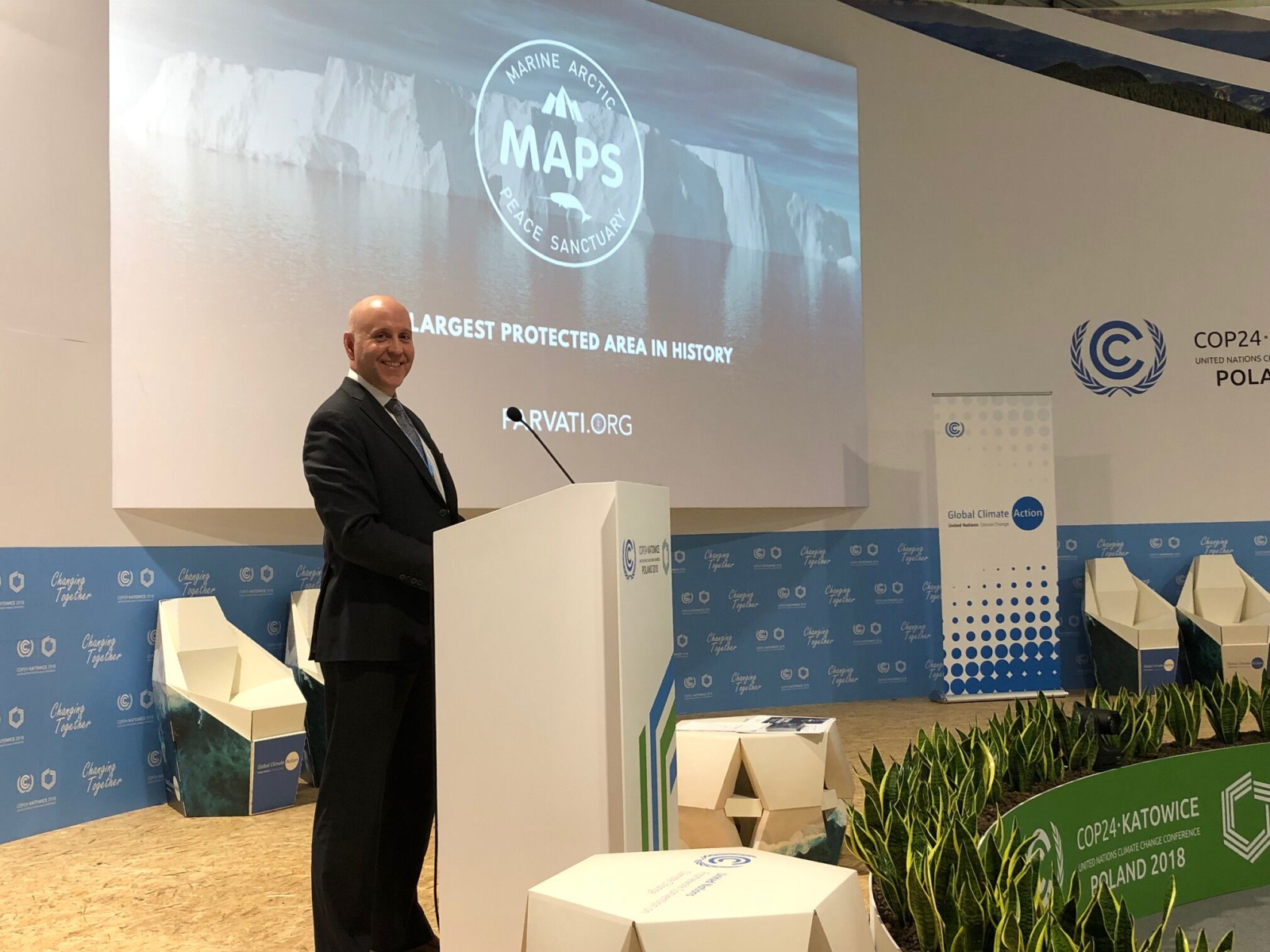 Darcy Belanger makes a presentation about the Marine Arctic Peace Sanctuary, a cause he helped found, at COP 24 in Poland in December 2018. Supplied by Parvati.org
Previous story
Next story

On March 10, during a layover in Washington, D.C., Darcy Belanger pulled out his phone and looked straight into the camera to record a quick one minute video message for his friends, families and supporters around the world.

The bright-eyed 46-year-old construction industry executive and environmentalist from Edmonton, Alberta spoke of his enthusiasm to be at the March 11 UN Environment Assembly to raise awareness about the Marine Arctic Peace Sanctuary or "MAPS" — a treaty that declares the Arctic Ocean north of the Arctic Circle an international peace park, free from exploitation of all kinds, to protect the polar ice cap and to curb the effects of climate change.

Belanger helped found Parvati.org, an all-volunteer global charitable organization that drafted the treaty and sent it to leaders of all 193 United Nations member states.

The treaty was why he was traveling from his home in Denver, Colorado to Nairobi, Kenya.

He had taken time off work to go to the United Nations Environment Assembly to inform and persuade government officials from around the world to "become signatories to the MAPS Treaty on an urgent basis to allow the effective entry into force by December 2019 of this vital protection for the Arctic Ocean, its ecosystems, and all life on Earth.”

He was also set to meet with a growing pan-African volunteer group who supported the cause to protect the Arctic Ocean.

"I'll check in again. We don't know where I'll be. Maybe Ethiopia, maybe my final destination, Kenya. But I'll keep you posted on the journey," Belanger said in the March 10 video. "Have a great day. Bye."

That was one of Belanger's last contacts with the world.

Belanger was one of the 18 Canadians who were killed on Ethiopian Airlines Flight 302 on March 10. The crash of Ethiopian Airlines plane and that of a Lion Air plane in Indonesia in October — both of them Boeing 737 Max 8 jetliners — have prompted Canada and several other countries to ground the aircraft.

Nineteen United Nations staff members were also among those killed on March 10, the UN said. These include staffers who worked for the World Food Programme, the Office of the High Commissioner on Refugees, the International Telecommunications Union, the Food and Agriculture Organization, International Organization for Migration in South Sudan, World Bank and UN Assistance Mission in Somalia, and the UN Office in Nairobi.

Parvati.org said they were contacted on Facebook by a man named John Hagen, who said he was sitting next to Belanger on the flight from Washington to Addis Ababa, Ethiopia. Hagen said Belanger told him about being a teacher in Edmonton and a television producer in Denver, Colorado before joining Edmonton-based PCL Construction and eventually transferring to their Denver office.

"Mainly we talked about the Arctic and his excitement about going to Nairobi and his hopes of making a difference," Hagen wrote in the Facebook message.

When they arrived in Addis Ababa, the two seatmates shook hands and wished each other well. "The last time I saw him, he was walking down the concourse in Terminal 2 in the Addis Ababa airport, clearly happy and excited to be on his way to Nairobi," Hagen wrote.

Parvati, the Montreal-born musician, author and environmental activist who is the CEO and managing director of Parvati.org, says she has had trouble sleeping since his death.

"He was the brother I never had," she told National Observer in an interview, her voice breaking with emotion.

Parvati has Top 40 songs and has written eight books about self-help and young adult fiction. But after a recurring dream of lying in a frozen ocean under which a great blue whale was trapped, Parvati wanted to do more for the environment.

It was around that time when she first met Belanger after being introduced by a friend.

"I had just met him and he said 'I'm all in'," said Parvati, who has also been acting as the spokesperson for Belanger's wife and family. "The issue just ignited something in me and him."

Belanger didn't go to the North Pole with Parvati but he was "instrumental in making it happen," organizing the grassroots support for the September 2010 event.

A few years later, in December 2014, Belanger became a founding member of Parvati.org.

"He was our quarterback," she said. "He was a force of nature that got us across the goal line."

Through Belanger's efforts, MAPS was supported by luminaries including Dr. Jane Goodall, UN Messenger of Peace and Yvo De Boer, former executive secretary of the United Nations Framework Convention on Climate Change. According to Goodall, it is “hugely important to establish the proposed Sanctuary. De Boer calls MAPS “the only sane choice for the critically vulnerable Arctic ecosystem, for the sake of our seas, our atmosphere and all life.”

Belanger never had relationships with government officials, Parvati said. In this area he was completely out of his comfort zone, but he believed in the cause and dedicated every free hour to it.

Belanger took the MAPS Treaty to COP 21 in Paris, COP 22 in Marrakech, COP 23 in Bonn and COP 24 in Katowice, and UNGA 72 and 73 in New York. He coordinated with volunteers and international climate campaigns and other NGO allies.

"I was demoralized by the negotiations but with his usual bright, relentless determination, he cheered me up by sharing stories of the amazing wins he and his colleague Vandana had made on the MAPS campaign in Katowice," she said in a statement. "Darcy was exactly the kind of compassionate leader our movement needs and cannot afford to lose.”

Belanger's legacy embodies what MAPS is about, Parvati said. He had both "the courage that recognizes our inherent interconnection and the action that arises out of compassion for all."

"He wanted the world to know about this underreported global crisis," she said. "His story really shows that one person can make a difference. There is a large gaping hole without him."

The polar ice caps are widely understood to help keep the Earth cool by reflecting the sun's heat away from the planet. According to reports, in February 2018, temperatures at the North Pole soared above freezing in the middle of the sunless winter, for the first time in recorded history. The polar ice cap are under threat by warmer global temperatures and exploratory oil drilling.

Parvati.org's goal to create the largest protected park in history continues with the volunteers Belanger helped recruit, Parvati said. As does the organization's long term vision to eradicate hunger and poverty worldwide.

"The loss of life in the plane crash is impossible to quantify," Parvati said. "Darcy was trying to give voice to the fact that thousands of children are dying every day due to whats happening with the melting polar caps. He was trying to secure what nature has given us for millions of years."