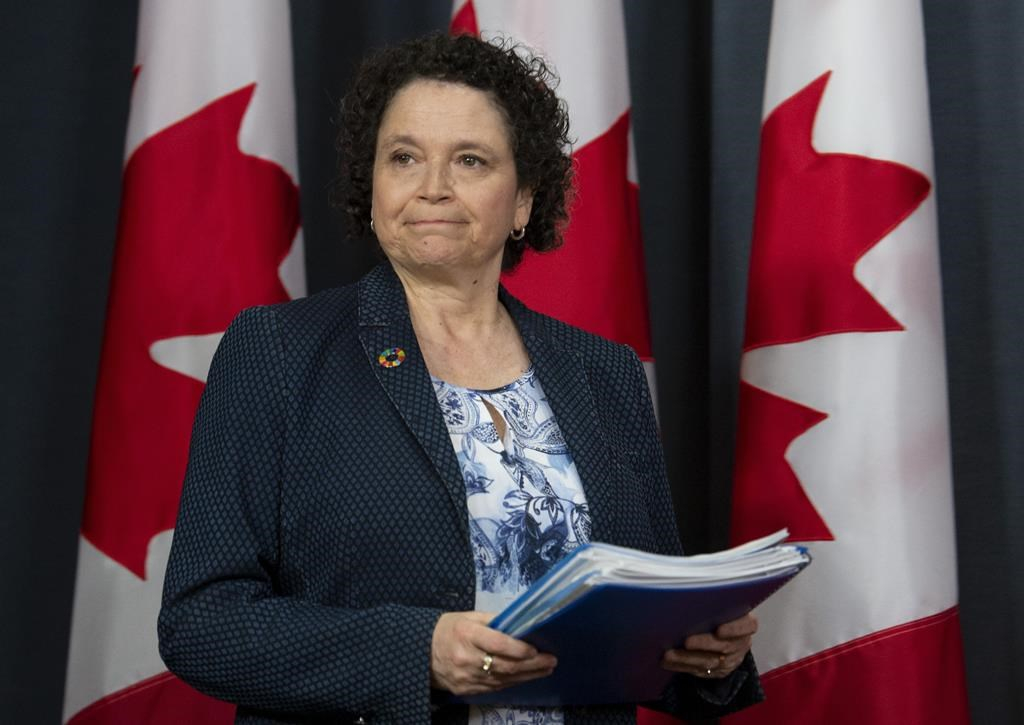 Commissioner of the Environment and Sustainable Development Julie Gelfand arrives for a news conference in Ottawa, on Tuesday, April 2, 2019. Photo by The Canadian Press/Adrian Wyld
Previous story

But her final conclusions as the country's environmental watchdog say it is Canada's slow action to deal with the warming planet that is most "disturbing" to her.

"For decades, successive federal governments have failed to reach their targets for reducing greenhouse-gas emissions, and the government is not ready to adapt to a changing climate," she said in a statement Tuesday morning. "This must change."

Gelfand's rebuke came a day after Environment Canada scientists sounded an alarm that Canada is warming up twice as fast as the rest of the world, causing irreversible changes to our climate.

Gelfand said neither Liberal nor Conservative governments have hit their own targets to reduce greenhouse-gas emissions.

Canada is not on track to hit its 2030 target, despite policies like the national price on carbon that took effect this week.

Gelfand's audit says the Liberals are not keeping a promise to get rid of "inefficient" fossil-fuel subsidies, which are undermining efforts to combat climate change, encouraging wasteful consumption of fossil fuels and discouraging investments in cleaner energy sources.

Canada has pledged to eliminate inefficient subsidies by 2025 as part of both the G20 and G7 economic groups of nations, and the Liberals also campaigned on a promise to get rid of them.

Gelfand concludes that both Finance Canada and Environment Canada have defined "inefficient" so broadly they can't decide what subsidies fall into that category.

Finance Canada's work on the subsidies focused exclusively on fiscal and economic considerations without giving any attention to the social and environmental issues at play. For its part, Environment and Climate Change Canada only looked at 23 out of more than 200 federal organizations when it compiled an inventory of potential subsidies for the fossil-fuel industry, Gelfand found.

Last year Canada began a peer review with Argentina that sees each investigate and report on the other's fossil-fuel subsidies. Last week Environment Minister Catherine McKenna started a public consultation on the subsidies to aid that peer review.

The draft assessment she released last week says her department has concluded that none of the federal non-tax subsidies for fossil fuels actually is "inefficient."

The assessment identified just four subsidies, including support to help Indigenous communities keep electricity prices down; funding for electric and alternative-fuel vehicle infrastructure, such as charging stations; and funding for research on clean technologies for the oil-and-gas sector.

Philip Gass, a senior energy researcher for the International Institute for Sustainable Development, said Tuesday using the World Trade Organization definition of subsidies, his organization found several that could or should be phased out.

The IISD list shows more than $1.2 billion in fossil-fuel subsidies from the federal government, and an even greater amount from provincial governments. Gelfand's audit looked only at federal subsidies.

Gass said the government's report on fossil-fuel subsidies is a good step toward transparency but that the reasoning behind the conclusion there are no inefficient subsidies is still confusing.

"We need a more ambitious approach and (to) have a better plan," he said.

Gelfand's audit is the second attempt to audit Finance Canada's fossil-fuel subsidy programs. In 2017, the auditor general made an attempt but was blocked when the department refused to cough up the needed documents. Eventually the department gave in, resulting in the audits released Tuesday.

Gelfand also looked at the current impact of invasive aquatic species, most of which are accidentally introduced to Canadian waters on the hulls of ships coming from international waters and many of which harm native marine life after arrival.

She found that although Canada has made commitments to prevent invasive species from taking hold in Canadian waters, neither Fisheries and Oceans Canada nor the Canada Border Services Agency did what they promised to do. She says a lack of understanding of whether provincial or federal authorities are responsible is interfering with efforts to prevent invasive species from getting established.