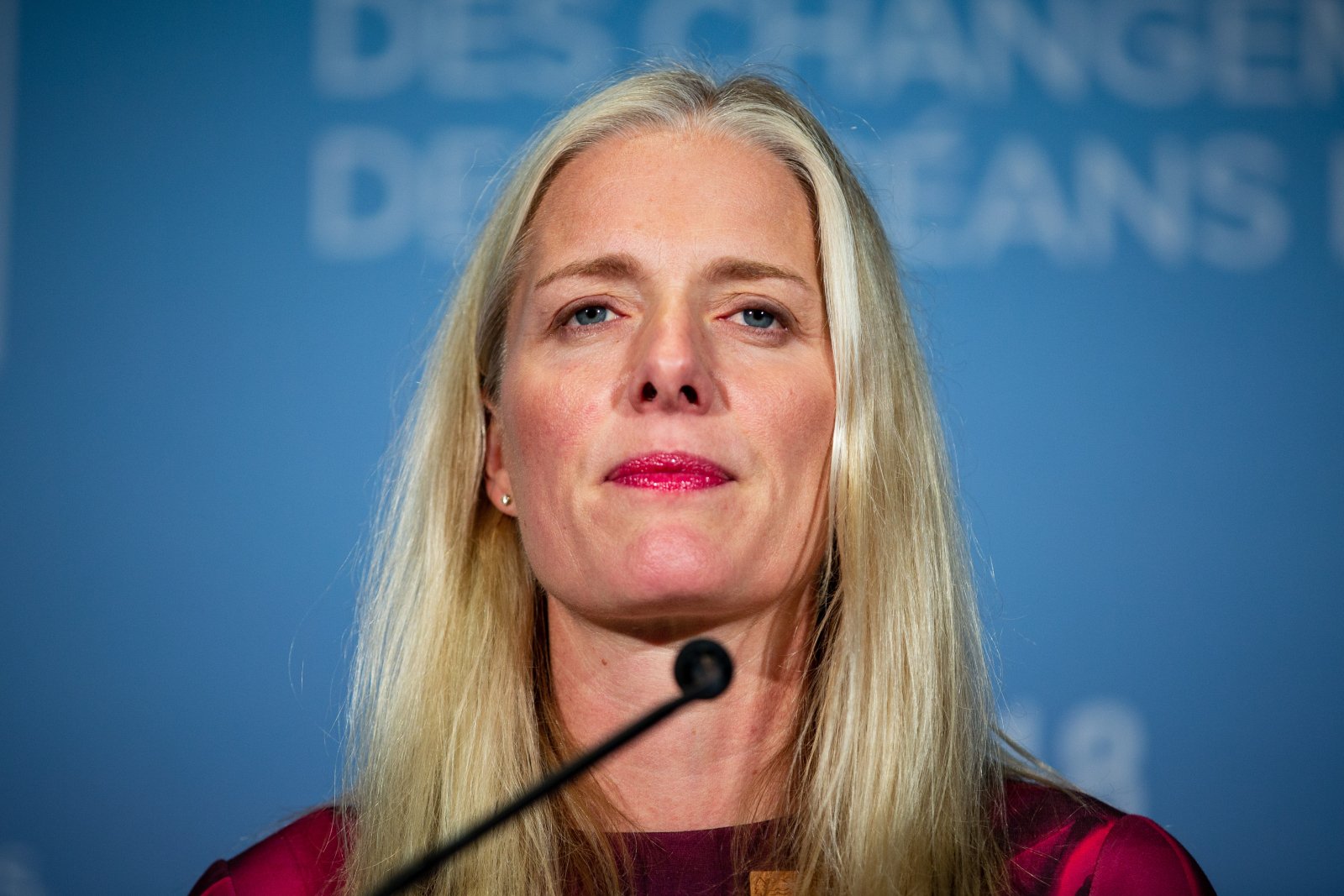 Environment and Climate Change Minister Catherine McKenna speaks to media during ministerial meetings for the G7 in Halifax on Sept. 19, 2018. Photo by Alex Tétreault
Previous story

It was the Trudeau government's turn to be on the hot seat on Tuesday as justices from the Ontario Court of Appeal grilled a Crown attorney about whether it was making the country's most populous province pay more than their counterparts to fight climate change.

In some heated exchanges, the justices pressed Sharlene Telles-Langdon to "fill in the blanks."

Seven minutes into the proceedings, Chief Justice George Strathy asked Telles-Langdon to identify the sources of Canada's greenhouse gas emissions, and whether they make up 90 per cent of all air pollution.

"I don't know," she responded, clearly taken aback by the information request.

"Fill in the blanks" continued to be the staple of the tough inquiries posed by the five-justice panel to the counsel for the attorney general of Canada, as they sought clarity on what kind of constitutional limit Ottawa was proposing to put on the powers it is seeking to exert by imposing a national carbon price to meet its international greenhouse gas reduction targets.

The exchanges came one day after Ontario's lawyer was grilled in a similar fashion by the justices about its own arguments. Ontario is urging the courts to quash the federal government's carbon pricing backstop, applied to provinces that have failed to meet a minimum standard that was agreed to by the federal, provincial and territorial governments as part of the 2016 pan-Canadian framework agreement on climate change.

Ontario is one of four provinces, led by conservative-leaning governments that are challenging the federal carbon pricing plan. The others are Saskatchewan, Manitoba and New Brunswick.

Ontario was initially exempt from the carbon pricing scheme since the federal government had determined that its participation in a cap and trade carbon pollution market with Quebec and California had met the national standard. But this all changed after Premier Doug Ford's Progressive Conservatives formed a new government following the June 2018 election and quickly moved to withdraw from the international market, without introducing any equivalent policy to crack down on carbon pollution.

At the core of Tuesday's proceedings was a question Ontario's legal representative posed to the bench Monday, and which was repeated succinctly again by Justice Robert Sharpe: "How do we prevent the federal government from reaching down into provincial jurisdiction to attack all of its activities?"

The federal government argued it has the right to legislate and regulate Canada's national response to climate change, and that provinces must participate in some form of carbon pricing for the country's plan to work. Telles-Langdon argued that, by their nature, greenhouse gas emissions cannot be divided by boundaries or jurisdiction. The federal carbon-pricing scheme is a regulatory charge intended to change behaviour, not raise money, she argued.

"There are measures that the federal government can enact that provinces cannot," Telles-Langdon told the court Tuesday. The Greenhouse Gas Pollution Pricing Act "is an example of that kind of measure," she said.

One thing Canada's lawyer has repeated throughout is that the the carbon price is the "least intrusive" and "most cost-effective" method to reach Canada's climate goals. The Justices keep asking for evidence to understand this clearly.

'Why don't you just leave them alone?'

The federal pricing plan, which returns funds to the province in which they are raised, is the "least intrusive" and "most cost effective" tool to reduce Canada's greenhouse gas emissions and meet its international obligations under the Paris Agreement, and avoid so-called "carbon leakage," where heavy industry shifts across an inter-provincial border in order to keep polluting at historic levels.

"Ontario made its own decision," Telles-Langdon said, by canceling its cap and trade program. The federal government had to step in and "fill in the gaps" their opting-out created in the national commitment to reduce emissions.

Telles-Langdon argued that the carbon pricing scheme would only work if there was flexibility for those provinces who do want to enact pricing mechanism. Ontario opting out disrupted that and could potentially hurt "inter-provincial competitiveness," she argued, noting repeatedly that Ottawa is not forcing the province to impose a carbon price, but that Ontario made its choice to fall under the federal price by cancelling cap and trade.

But the five-justice panel pushed back on this argument. Justice James MacPherson repeatedly noted that Ontario had already reduced its emissions significantly more than the other provinces after the closure of all of its coal-fired generating plants — a shutdown which began under former Liberal premier Dalton McGuinty in the early 2000s and was finished under his successor, Liberal premier Kathleen Wynne.

"We don't care how they achieved it," said Justice MacPherson, referring to Ontario's 22 per cent reduction in greenhouse gas emissions since 2005. "Why don't you just leave them alone?"

"Ontario has had a great result over 14 years," responded Telles-Langdon. "Unfortunately, Ontario can do nothing about what’s happening in other provinces.”

MacPherson asked why Ontario would have to shoulder "an extra burden because other provinces are failing." He remained unconvinced that the federal government's pricing mechanism was the "only way to address the problem," noting that Ontario's greenhouse gas emissions had gone down significantly without one.

"Is that not evidence," he asked, of Ontario's argument that Ottawa was overreaching.

Got a text from Alex in Eastern Ontario.

He drives a truck and has to use gas for his generators to do his job.

He also can't carpool or take public transit to get across rural Ontario.

It's hard-working folks like Alex who are hurt most by the federal carbon tax. pic.twitter.com/WvqnsT78TA

Huscroft, who was mostly silent during Ontario's presentation Monday, took particular care to probe the federal government's arguments, questioning why "cumulative" greenhouse gas emissions were of national concern for Ottawa as opposed to "the aggregate" result of provincial climate actions.

He noted that the federal scheme "ensures a national price-based system, which is just a means to the end of greenhouse gas reduction." When Telles-Langdon responded affirmatively, Huscroft said, "that's a point against you. You shouldn't be agreeing to that."

If Ontario, or any other province, had an alternative plan, would Ottawa "still force a price on them?" he asked "Hypothetically, even if they were achieving all the aims of your scheme? Pricing is a means to an end, not an end."

"The court’s role is to assess that the means chosen by Parliament is a national mechanism," replied Telles-Langdon. "Pricing reduces emissions. That is an unquestioned fact."

But MacPherson and Huscroft remained skeptical as they tried to understand how far Ottawa was willing to go to curb greenhouse gas emissions, noting that the carbon pricing scheme was estimated to address "a quarter of the problem." MacPherson asked how Canada was planning to address "the other three quarters of the problem?"

"Every drop, every litre of gasoline, is contributing to the shield of dimensions here. Where is this line to be drawn that is in any way ascertainable?" MacPherson asked.

The federal government's lawyer was unable to provide a clear answer.

"You're asking us to, in effect, change the balance of powers in the constitutional order. And all I'm hearing from you is 'don't worry, when it comes up, we'll appear in court again,'" he said. "You have to show us what the ascertained limit is here."

“You won’t pin yourself down on what it’s going to apply to,” Huscroft said.

Why Ontario needs to reduce more GHGs than other Canadian provinces

Ontario’s challenge puts its federal Conservative counterpart in a difficult position. Opposition Conservative Party of Canada Leader Andrew Scheer is approaching a 2019 election campaign having to choose between siding with premiers opposed to climate action and sticking with the federal and global targets initially agreed to by former prime minister Stephen Harper, according to new data released Tuesday.

Greenpeace Canada senior strategist Keith Stewart said that Ontario's arguments are illogical. He said that the Ford government's position would require a province like Alberta to reduce its emissions at an order of magnitude that would be equivalent to shutting down its entire oil and gas sector by 2030 (111 MT, or 41 per cent below 2017 levels).

Stewart said the “implicit deal” in the 2016 national climate change framework between Trudeau and the premiers required large manufacturing provinces such as Ontario and Quebec to do more so that oil producers such as Alberta and Saskatchewan could do less.

But this #cdnpoli logic (that every province should adopt federal target) means AB would have to reduce by 111 MT by 2030 (41% below 2017 levels). That's the equivalent of shutting down the entire AB oil and gas sector 6/n

Canada filed its primary arguments with the court earlier this year. They are similar to the arguments, previously filed in February as part of a parallel case ongoing in Saskatchewan.

The federal carbon tax has emerged as a political lightning rod in Ontario, Saskatchewan, and other provinces. Alberta is heading to the polls Tuesday in a provincial election that has been centred, in part, around the oil and gas industry and climate policy, and the United Conservative Party — whose leader, Jason Kenney — is scheduled to make arguments to the Court of Appeal Wednesday, along with a variety of interveners.

New record high gas prices in BC. This may be “exactly what” Justin Trudeau wants, but I know these high prices only make it harder for families to get ahead. As Prime Minister I will work to make life more affordable for all Canadians. pic.twitter.com/zTiIQoKDeB

Federal Conservative Leader Andrew Scheer, who has joined with provincial peers in opposing the federal plan, has recently criticized high gasoline prices in Vancouver which he tied to Ottawa's pricing standard. B.C. has had a carbon tax in place since 2008 and its economy has grown since that time. The province also raised its carbon tax on April 1, for the first time in several years, allowing it to meet the new federal standard.

Conservatives only want to

Conservatives only want to look at half the equation: what the carbon price will cost families. Why so careful to avoid mentioning the steep financial (not to mention existential) losses we'll all face due to worsening climate change, bringing more heat, floods, wildfires, coastal erosion, agricultural failures, pests, air pollution, uninsurability, migration pressures, fishery failures, healthcare costs, infrastructure damage, species extinctions, and so on?

Too hard to make up a neato sticker that nicely summarizes all the things Conservatives don't mind throwing away on behalf of our children? Like their future hopes and dreams for a survivable climate?

But the points of law are not

But the points of law are not as frivolous as I first thought:
1) If pricing carbon is only a means to the end of reducing emissions and Ontario is already on track (and ahead of other provinces) at reducing emissions, then why are the feds requiring Ontario to place a price on carbon?
2) Pricing carbon assigns a significant economic value to something that economics had heretofore ignored. Consequently pricing carbon adds a new material dimension to federal-provincial relations and thereby affects the balance of power between the levels of government. Apparently the federal legislation does not lay out any framework to address this issue.

I want the feds to win because I want ALL economic externalities brought within economic decision-making (including depletion of non-renewable resources, assigning economic value to commons, and unpaid work that benefits society). Until that day economics is a materially incomplete and distorted lens for decision making. But they have to do it with good governance and respecting the boundaries on their powers.

Personally I don't trust the

Personally I don't trust the Trudeau government to spend our money wisely. Was 12 million to Loblaws an April Fool's joke?