Wet’suwet’en hereditary chief: 'Reconciliation is not at the barrel of a gun' 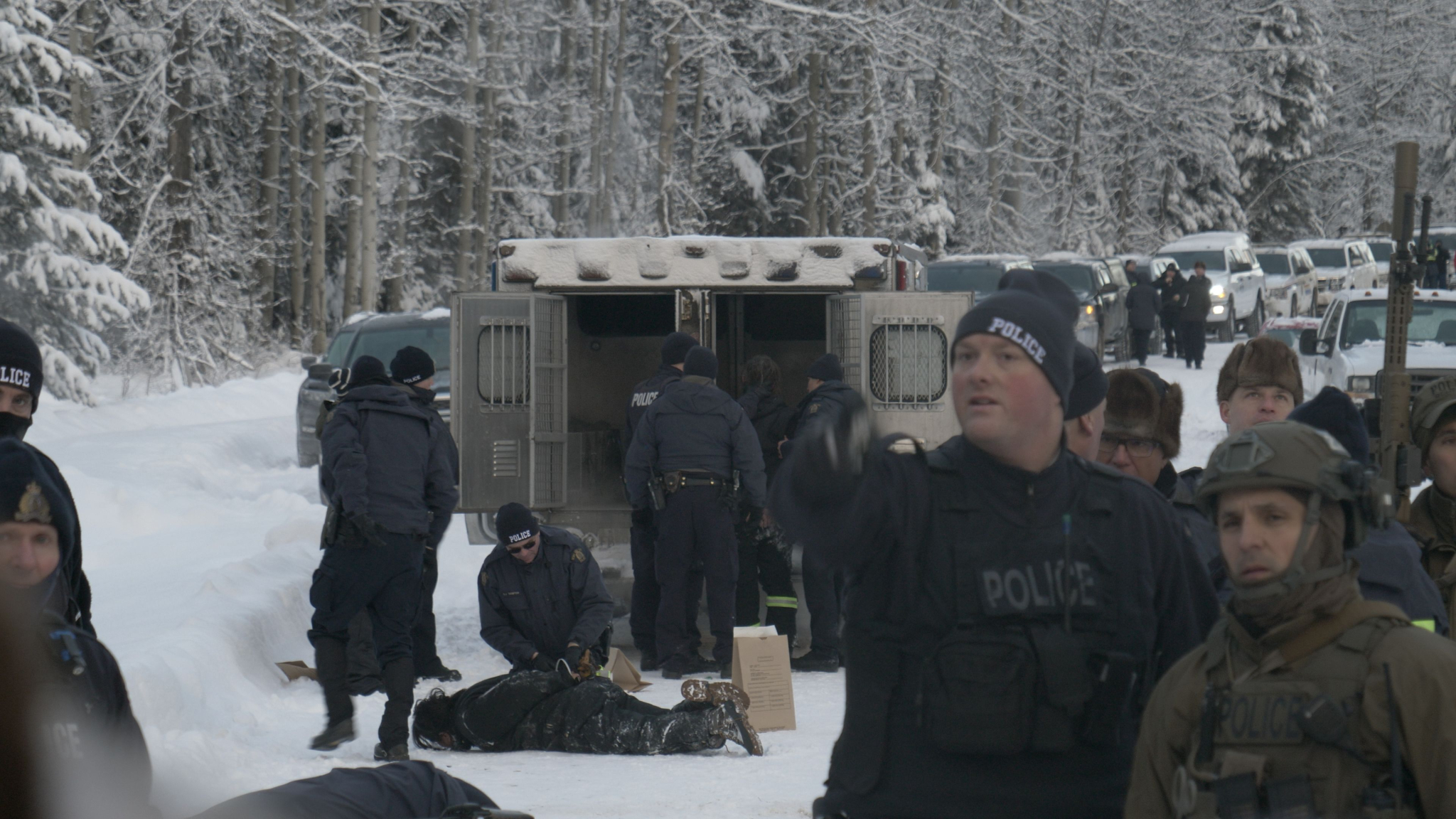 Wet’suwet’en Hereditary Chief Na’moks of the Tsayu (Beaver) Clan remembers when federal Minister Carolyn Bennett announced that Canada would implement the United Nations Declaration on the Rights of Indigenous Peoples.

Chief Na'moks (John Risdale) responded publicly at the United Nations in New York in May 2016 that he would hold Canada accountable.

For some, the unceded Wet'suwet'en territory has become a powerful symbol in recent months about the challenges the federal government faces in delivering on that promise.

Now, almost three years since the pledge by Bennett, the minister of Crown-Indigenous relations, Na’moks says it is clear that Canada has failed to keep its promise.

Chaos unfolded early Jan. 7, 2019 when armed RCMP officers raided a barricade in Wet’suwet’en territory set up by members of the Gidumt’en Clan in Smithers, B.C. The blockade was meant to prevent access to a Coastal GasLink (CGL) pipeline construction site because hereditary leadership had not given consent to the project.

All 20 elected First Nations councils along the proposed 670-kilometre natural gas pipeline route have given consent and signed a Mutual Benefit Agreement, says Coastal GasLink. The pipeline is to go from Dawson Creek to LNG Canada, a liquefied natural gas facility to be built in Kitimat.

Under their RCMP uniforms 'they're human'

The days leading up to the raid were tense, but Na’moks says he made sure the RCMP posted nearby were treated well.

“We told them they better eat some soup,” Na’moks said in an interview with National Observer. “It was cold. Under that suit they’re human. The first day they were leery. The odd one would come over and eat it. Then there was a change…although they’re standing hand in hand with CGL they’re still human beings.”

In the dramatic scene that unfolded in January, arrests were made by officers wielding rifles after they climbed over the barricade which was then set on fire. Thousands of people around the country and the world rallied to protest the treatment of the Wet’suwet’en and offer solidarity.

“They (governments) went back well over 100 years while invading our territory,” said Na’moks. “I kept thinking of the prime minister and how he said there was no more important relationship than the one with Indigenous people. And then here come all these guns…Reconciliation is not at the barrel of a gun.”

He wondered why the federal government watched from afar and did not intervene. The RCMP made the arrests while enforcing a provincial court injunction filed by CGL so that the project could move forward. However, Na’moks said he believes the federal government could’ve stepped in because the RCMP is a federal organization.

Lawyers for the Crown and Coastal GasLink announced April 16 that criminal contempt charges have been dropped against 14 people who were arrested when the RCMP moved on them. The lawyers said there wasn't sufficient evidence for convictions.

Wet’suwet’en law stands in Wet’suwet’en territory, Na’moks said. The government skirted Indigenous land and title rights to push the pipeline project through, he added. It worked well for the government because the elected chief system is based on a European way of leadership and it’s something that governments know how to maneuver, he added.

“Federally and provincially they’ll only deal with their constructs, the bands, because they created them. They don’t know how to deal with us, yet we’ve been here for thousands of years. Our authority and jurisdiction on the land will always be.”

Hereditary chiefs worry about risks to water and salmon

The Wet’suwet’en people still use their ancestral homelands. They hunt, fish, pick berries and gather medicines. To hereditary chiefs the risks of damage to the environment isn’t worth all the money in the world.

“You have to balance the costs and benefits. If we get left with all the risks and they get all the benefits ... You can’t just come in with a gold rush mentality and then you’re out of there. You’re setting yourself up for failure.”

“You billionaires (industry) are so rich, all you have is money. We’ve got land, air and water. We got so much land we stack it up, we call them mountains,” he proudly stated.

He’s thinking about protecting land beyond the vast inland Wet’suwet’en territory and waterways, all the way to the coast and to Haida Gwaii. The Wet’suwet’en believe that the environmental impacts will trickle through territories and eventually affect the entire world.

In a statement to National Observer, Coastal GasLink said the project has undergone extensive environmental assessment and the company is pleased to have strong support from First Nations, including elected and many hereditary chiefs. "The Wet’suwet’en community had an integral role in helping to shape the project from the very beginning. We’ve held over 120 in-person meetings with Wet’suwet’en Hereditary Chiefs and have had over 1,300 other interactions (calls and emails). We will continue to collaborate at every stage of the process," the company said..

"Coastal GasLink is committed to continuing to work collaboratively and engage with Indigenous communities as we build a world-class project that will bring employment, along with social and economic benefits to British Columbia communities and First Nations, while helping to safely meet the growing global demand for cleaner energy."

Chief Na’moks said it is important for the Wet’suwet’en people to stand up for their right to say no to development because the world is watching.

“We think about all our cousins and relatives right to the oceans and islands," he said. "That’s part of our responsibility too. There are not many places on this planet like this. You can drink out of any creek or river and you don’t have to worry about it.”

The office of Crown-Indigenous Relations said in a statement to National Observer that it continues to work to renew Canada’s relationship with Indigenous Peoples, “creating one based on the recognition of rights, respect, cooperation and partnership.” Canada has acted to implement the United Nations Declaration on the Rights of Indigenous Peoples while acknowledging that far more must be done to facilitate its complete implementation, the statement read.

But Na’moks says that the UN Declaration can only be implemented and upheld by the Indigenous Peoples. If you allow the government to tell you what the declaration is, “you’re actually under their umbrella.”

In mid-March the Wet’suwet’en hereditary chiefs invited Premier John Horgan and other B.C. government officials to a meal at a traditional feast hall. It was an olive-branch moment, explained Na’moks. Not that the Wet’suwet’en were inviting the province to negotiate on the matter.

“It was taking steps to talk about implementing our rights, title, authority and jurisdiction and it’s non transactional. This is a new way for B.C. to deal with us. We told them the only way they’re going to move forward is to do it this way.”

According to a statement provided by Scott Fraser, B.C. minister of Indigenous relations and reconciliation, the feast provided an opportunity for provincial leaders to deepen their understanding and respect for Wet’suwet’en hereditary leadership protocols.

“Our attendance as guests was a formal acknowledgement of respect for Wet’suwet’en governance and Wet’suwet’en clans and house groups. It was a deeply meaningful way for all of us there to step onto our path together to explore comprehensive reconciliation, government-to-government,” Fraser said.

He confirmed the visit and discussions were not connected to any specific project, but about Wet’suwet’en self-determination and self-governance. They also addressed the lack of progress on determining Wet’suwet’en title and rights which remain unresolved from the Supreme Court of Canada’s 1997 landmark decision in Delgamuukw Gisday’Wa. The Delgamuukw v British Columbia case brought forward by the Gitkan and Wet’suwet’en nations recognized and reaffirmed Aboriginal rights, title to Aboriginal lands and duty to consult.

“The province respects all Nations’ internal governance structures. Our view is that reconciliation at its heart is about supporting Indigenous self-determination and how First Nations choose to govern their own Nations.”

While the physical barrier of the Gidumt’en blockade was taken down, the barriers to resolve and reconcile between all parties were stacked higher that day, Na’moks said. Reconciliation may be possible, but not in the way governments define it.

'What the hell did we do except be Wet’suwet’en?'

“They want to break down all these barriers which they constructed. They want to talk about reconciliation? Well, I don’t’ know if I ever want to use that word again. My definition: to reconcile must be two guilty parties coming together. What the hell did we do except be Wet’suwet’en? Not once did we break our law. They said the people arrested were being civil disobedient, well they were being obedient to our law.”

On April 2 another Wets’uwet’en Clan announced plans to build a new barrier to the CGL pipeline in its territory. The Likhts’amisyu Clan wrote in a statement that construction in its territory would begin at the end of April to assert their sovereignty and stymie CGL by blocking them at multiple points with resistance camps. "It is important that people realize that this fight is far from over," the statement said.

Na’moks stands with them. The Wets’uwet’en people are willing to fight to the end, he said. “I won’t give up on our land and the Wets’uwet’en.”

"Coastal GasLink is aware of social media discussion regarding the construction of new structures in areas near the Coastal GasLink right-of-way," the company said in the statement to National Observer. "We continue to progress our preliminary construction activities in accordance with the permits and authorizations received from the Environmental Assessment Office and the BC Oil and Gas Commission."

Na’moks is scheduled to travel to New York in April to address the United Nations permanent forum on Indigenous issues. He said he plans to report violations of Indigenous rights and title, including the RCMP arrests and government failure to secure free, prior and informed consent to allow the project on Wet’suwt’en territory.

Thank you, Brandi, for

Thank you, Brandi, for keeping this important storyline in the news. It is vitally important that everyone learns how to listen to each other and in this case, understand the difference between world views, one entrenched in European and colonial heritage and the other in 'land, air and water' heritage.

"Coastal GasLink is committed to continuing to work collaboratively and engage . . . while helping to safely meet the growing global demand for cleaner energy." Armed RCMP storming and burning the gates, arresting First Nations, hardly collaborative! Also, the Minister Catherine McKinna is doing her best to try to get the emissions down, but the existing Oil and Gas and Heavy industry keeps chugging out the GHGs. And the Provincial Ministers won't think about carbon pricing. The CGL expression, to meet global demand for cleaner energy, Natural gas and LNG are NOT cleaner energy, gas is mostly methane, and is a worse polluter and GHG than coal and oil. Cleaner energy is solar, wind, geothermal, waves and tidal. Megahydro is not clean, GHGs can be significant, and methyl mercury poisoning for fish. If agree to a big upsurge of natural gas to make the LNG, one is also agreeing to big increases in methane and fracking chemicals polluting the water, air, public health land and ecosystems--the cumulative impacts. NE B.C., First Nations and non-indigenous, in Blueberry, Fort Nelson etc Territories, already are paying a big price of cumulative impacts. Another fracking surge would last 20-30 or more years, completely destroy any hope for FN traditional ways.