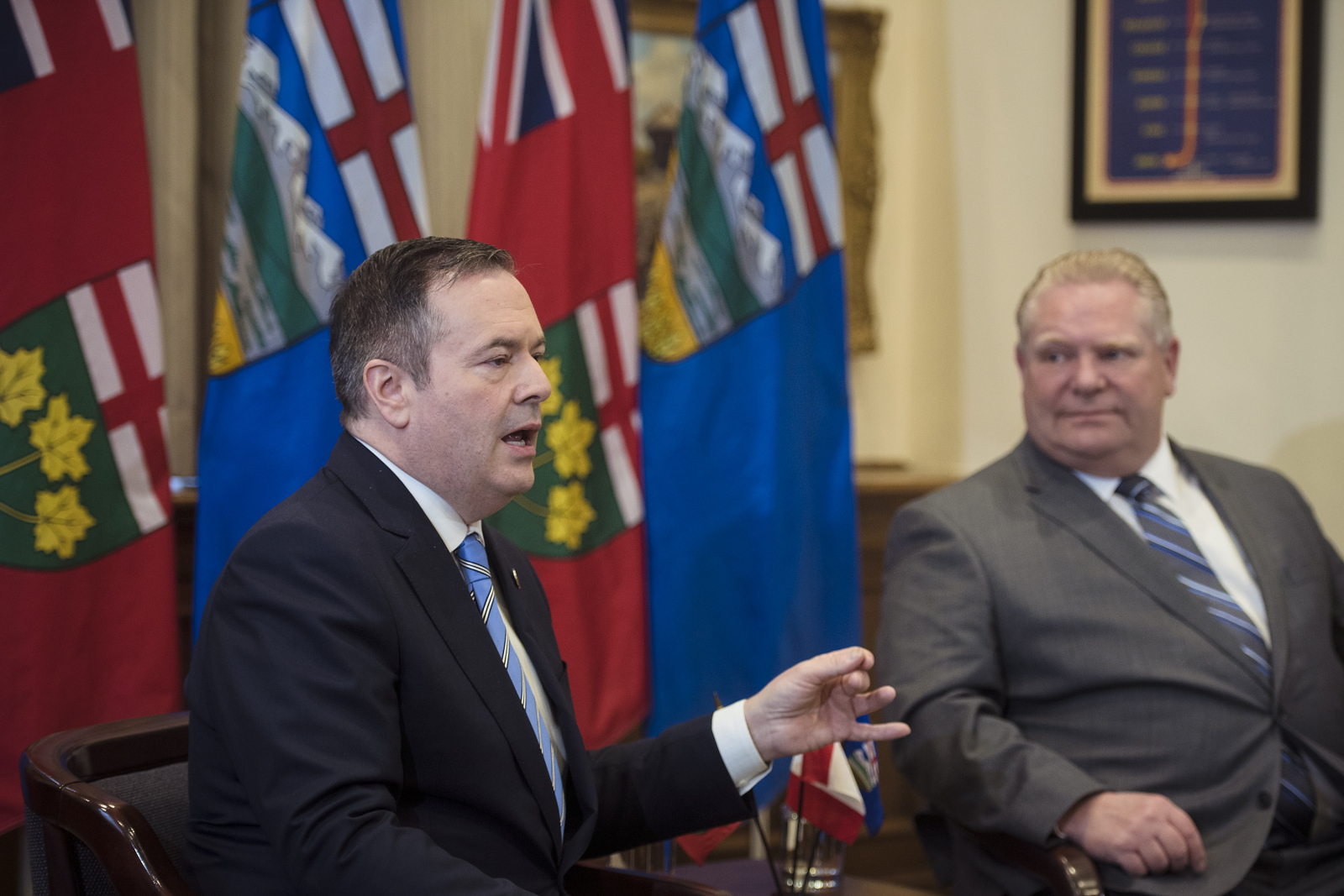 Ontario Premier Doug Ford was all smiles on Friday morning as he welcomed his "great ally" — newly-minted Alberta Premier Jason Kenney — to Toronto.

Both premiers used the occasion to reiterate their fight against the federal carbon tax.

“I want to thank Premier Ford and his government for being key players in the coalition fighting the carbon-tax cash grab,” Kenney said.

“I appreciate everything you’re doing to show Ontario is open for business. I’ve got to tell you I’m in Toronto to tell Bay Street that Alberta’s open for business,” he added, referring to his Canadian Club luncheon speech at the Fairmont Royal York Hotel.

There, he made a pitch to the Toronto business crowd to invest in Calgary, where he plans to lower corporate taxes to eight per cent (currently it is at 12 per cent), below Ontario's rates in order to "restore investor confidence."

"Alberta will get back its reputation as the beating heart of enterprise values in Canada," Kenney told Toronto's business community on Friday.

Much of Kenney's message to Toronto's business community focused on how he would reduce red tape in the western province. He seemed to take Ford's political playbook one step further by announcing he is creating a "Minister of Red Tape Reduction," whose sole responsibility would be "to identify and reduce red tape by at least one third." (This week, Cardston-Taber-Warner MLA Grant Hunter was appointed as Alberta's "Associate Minister of Red Tape Reduction.")

Kenney said regulatory burdens need to be reduced across the country so that businesses would reinvest in the country.

"If you think this is competition, we are here for it," Kenney said, addressing Rickford – who was at the Canadian Club luncheon – directly in his speech.

Kenney could be seen in Ford's Instagram story gushing over a large 18th century painting of the Rockies in the Ontario premier's office. "You've already got Alberta in your office," Kenney said smiling. Ford replied that it was "such a coincidence," and expressed excitement at visiting Alberta again in the future.

Hereos welcome for @jkenney when he walks in with @fordnation -many deep personal connections around this table. We’re so proud of him. pic.twitter.com/vTSYXkifn6

Kenney, a former federal cabinet minister, has already spent most of the first week of his new mandate in Ontario, including an appearance at a Senate committee where he denounced Bill C-69, as well as a party in Ottawa with Ford and other conservatives, earlier in the week, to celebrate the 60th birthday of former prime minister Stephen Harper.

The meeting between the two premiers reiterated many of the messages the two have been sharing publicly over the past year: that the tax is "punitive," that it will have little positive impact on the environment, and that it will "make the lives of ordinary people more expensive." Neither premier has acknowledged that the federal carbon pricing plan provides rebates to most households that exceed the increase in the cost of fuel.

The two premiers met a day after news emerged that Kenney's new government had hired a prominent proponent of putting a price on pollution, Mark Cameron.

A few weeks ago, Cameron was the executive director of Canadians for Clean Prosperity, a non-profit group that advocates for strong action on climate change and clean economic growth by putting a price on the heat-trapping pollution that contributes to global warming. Cameron is now a deputy minister at the policy coordination office in the Executive Council, which is the central department of the Alberta government.

In his meeting with Ford, Kenney noted that an important decision was expected Friday from Saskatchewan’s Court of Appeal on whether the federal price on carbon is constitutional. In a 3-2 decision, the court ruled that the federal carbon tax is constitutional. Last month, Ontario’s Appeal Court also heard a $30 million constitutional challenge from Ford’s Progressive Conservative government over the carbon tax.

Alberta and Ontario, along with Saskatchewan, New Brunswick, and Manitoba, are mounting a strong opposition to the job-killing Trudeau carbon tax.

Alberta's Bill 1 will be the Carbon Tax repeal act to bring relief to taxpayers and job creators. pic.twitter.com/scDmJJptgA

Kenney has also pledged to take action to address climate change that would include the introduction of a carbon levy on industry.

In his Canadian Club speech he said that Canada had "a moral imperative" to compete on the world stage, and that if they were serious about doing so while reducing greenhouse gas emissions, "the single most effective thing we could do is to get major liquified natural gas pipelines and export facilities on our coast."

Canada has been too polite on the world stage, Kenney said, making a joke that the quickest way to get Canadians out of a swimming pool was to simply ask them.

To achieve this, Kenney said he spoke to Ford about the economic impacts of Bill C-69, the federal government's proposed legislation that would, according to the news release put out by the Ford's office, "grind new resource development and the energy sector to a halt across Canada."

In Ottawa on Thursday, Kenney warned Liberal Prime Minister Justin Trudeau that Canada faces a national unity crisis if federal environmental policies continue to wage a "full frontal attack" on Alberta's economic prosperity, and if the carbon tax continues to serve as a "blatant violation of the Constitution."

He told the Canadian Club in Toronto that Trudeau ran on a campaign that promised to "respect provinces, to engage with them, to listen to them."

"Ontarians get it," Kenney said. "You stand with us in solidarity, and we truly appreciate that."