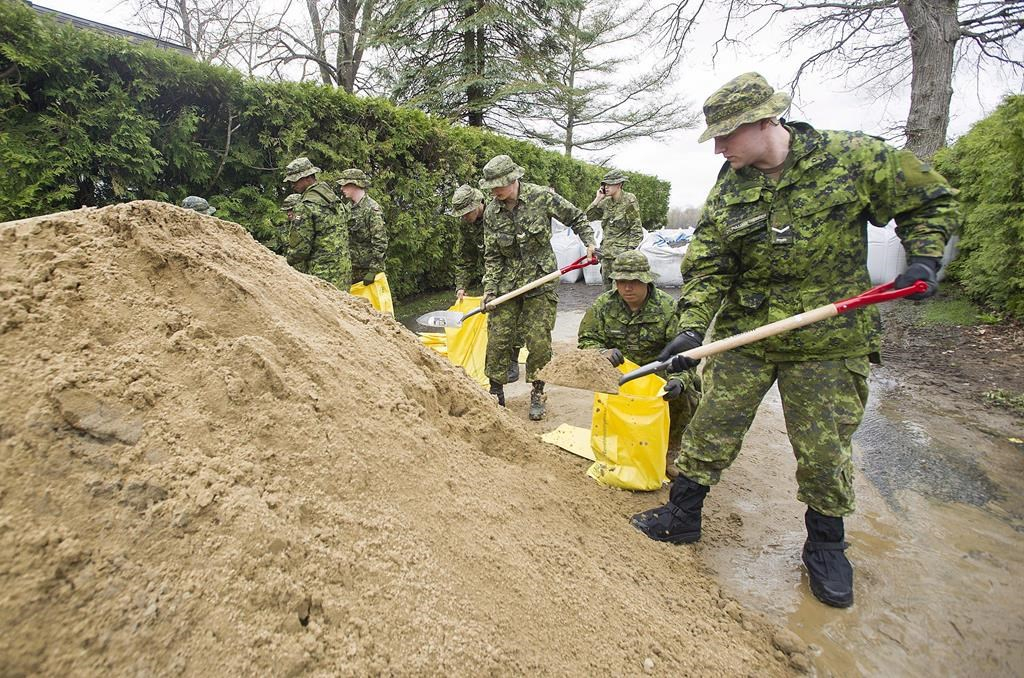 Members of the Canadian army fill sandbags in the Montreal borough of Pierrefonds, on Sunday, May 7, 2017, following flooding in the region. File photo by The Canadian Press/Graham Hughes
Previous story
Next story

And while flooding has largely stabilized or begun to subside, high water levels continue to threaten some communities in Quebec and neighbouring Ontario.

The Forces have agreed to Quebec's request to deploy soldiers for a second mandate, this time helping with cleanup operations, Carignan told reporters alongside provincial Public Security Minister Genevieve Guilbault.

Carignan said the army has teams across the province trying to determine what needs to be done, how many soldiers are required and for how long.

"By the end of the week, I expect to have a plan by which I will be able to determine the amount of resources that will go towards supporting the restoration and recovery work," she said. "I'm aiming towards starting the execution next week."

Guilbault said the decision to maintain soldiers in the province was "really good news."

With the crisis stage of flooding over, Carignan said soldiers will move from protecting property to restoring critical infrastructure such as city halls, water filtration plants and main roads. She said there are roughly 100 soldiers across the province assisting in flood relief.

In northwestern Quebec, authorities in Notre-Dame-du-Nord fear high water levels in Lake Timiskaming could trigger landslides. The lake feeds into the Ottawa River, which has burst its banks and flooded some communities.

In Pembroke, Ont., which last week declared an emergency as the Ottawa River flooded, authorities announced Monday that Canadian Forces personnel are no longer needed.

Meanwhile in Maniwaki, Que., about 135 kilometres north of Ottawa, the rising water of the Desert River prompted authorities to evacuate a long-term care home that houses roughly 70 people.

As of Sunday evening, 5,245 homes were flooded in Quebec, 3,461 houses surrounded by water, and 7,452 people were forced from their residences.