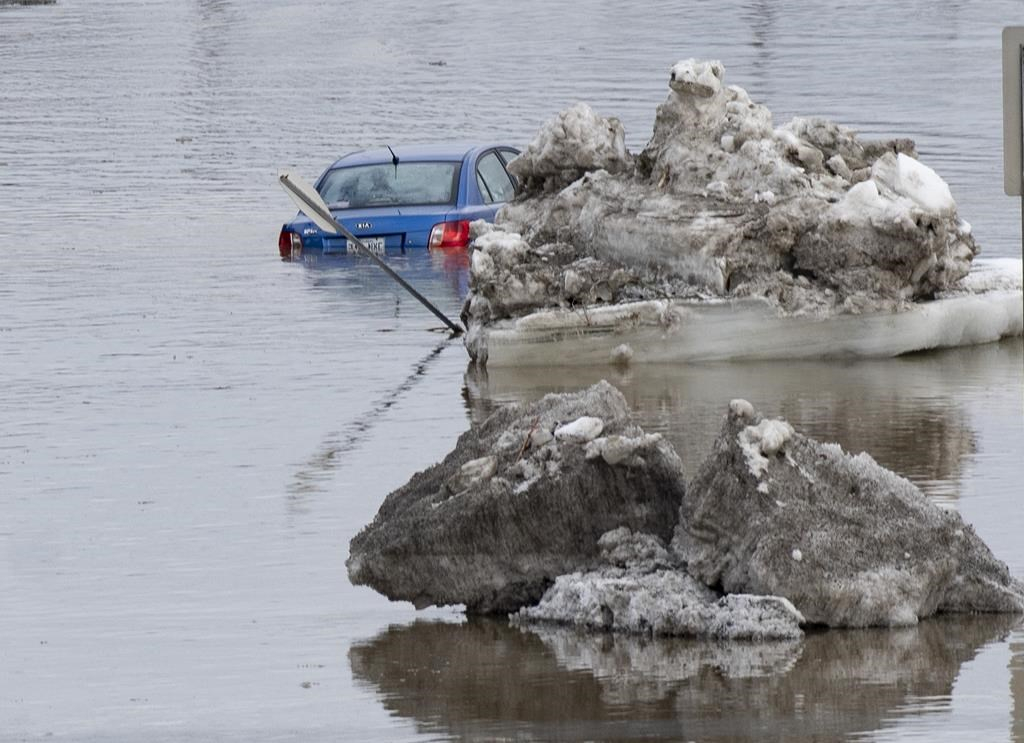 A flooded car sit in the flooded main road on Tuesday, April 16, 2019 in Beauceville Que. The Chaudiere River flooded and forced the evacuation of 230 buildings and 36 people. Photo by Jacques Boissinot for The Canadian Press
Previous story

Quebec communities were bracing for major flooding in various parts of the province Thursday as rainy weather was expected to settle in for the beginning of the weekend.

The province's public security minister urged citizens in regions at risk of flooding not to take any chances and to follow the advice of civil security officials.

Genevieve Guilbault made the comments as two days of heavy rain were forecast for the province ending Saturday, aggravating the danger in areas where water levels are already high.

Guilbault advised citizens in municipalities deemed at risk to be prudent.

In Beauceville, south of Quebec City, where flooding has struck at least 230 homes, Environment Canada says between 40 and 70 millimetres of rain could fall through Saturday.

"The rainfall combined with the snowmelt could heighten water flows in rivers," the agency warned in a weather statement. "Localized flooding in low-lying areas is possible."

Officials are keeping an eye on other swollen rivers as well — Montreal has experienced some minor flooding, and the Monteregie region directly to the south is also impacted.

Guilbault said civil security officials will keep close tabs on the situation throughout the weekend.

In Gatineau, Que., across from Ottawa, Mayor Maxime Pedneaud-Jobin was concerned about what lies ahead.

"In 2017, we had a many weeks to prepare, in a way, because we had a first episode and then a second," Pedneaud-Jobin said. "We're in a situation where what we went through in a couple of weeks, we might have happen in a couple of days."

Hans Gruenwald Jr., the mayor of Rigaud, Que., in southwestern Quebec at the junction of the Rigaud and Ottawa Rivers, advised residents on the flood plain to leave their homes. He warned that those who don't follow an evacuation order might not get rescued if it puts the lives of first-responders at peril.

The community west of Montreal faced massive flooding and heavy damage in May 2017 and the mayor fears this year might be worse.

Gruenwald noted that in 2017 some residents worked day and night sandbagging their properties to keep the water at bay, only to fall a few inches short.

"The big difference is the speed at which this water will arrive," he told a news conference. "Unless your rowboat is tied to your front porch post, you're not going to have time to get out of there."