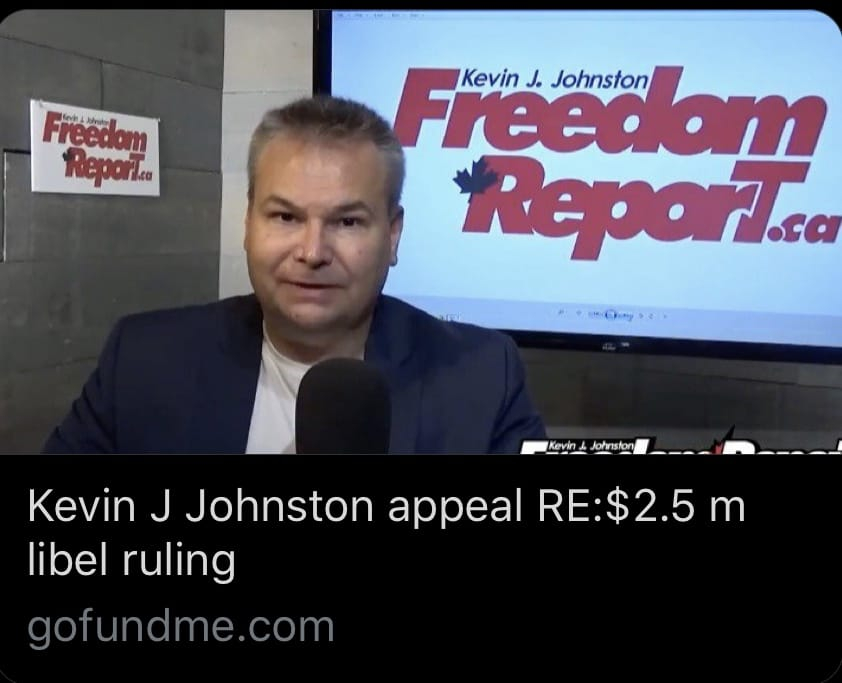 A GoFundMe campaign to raise funds for Kevin Johnston's legal challenge was posted on May 14, after he lost a defamation suit. The campaign was quickly taken down for violating the platform's terms and conditions. Screengrab of campaign
Previous story
Next story

Hours after a far-right vlogger and former Mississauga, Ont. mayoral candidate lost the biggest defamation suit regarding online hate in Canada, someone set up a GoFundMe page on his behalf to raise money to challenge the decision, which was taken down after National Observer and others inquired about it.

Kevin Johnston is a 47-year-old man who runs the Freedom Report — a network of sites that frequently shared anti-Muslim views. In 2018, he ran for mayor of Mississauga, Canada’s sixth largest city, and finished in second place with 13.5 percent of the vote. He has also created videos targeting Muslim leaders in government including Liberal MP Iqra Khalid and worked with Rebel Media. (Full disclosure: he has also made a video referencing this reporter.)

In 2017, he offered a $1,000 prize to anyone who could send him a video of Muslim students praying in high schools, so he could put a stop to it. That same year he was charged with a hate crime after “a lengthy investigation into numerous incidents reported to police” involving him and the information he spreads on his social media.

On Monday, a court ordered him to pay Toronto restaurateur Mohamad Fakih $2.5 million—one of the largest damages award given in a defamation suit in Canadian history, according to lawyers. The landmark decision, written by Ontario Superior Court Justice Jane Ferguson, states that Johnston made eight videos calling Fakih an “economic terrorist” who was funding terror groups and helping “illegal aliens” come to Canada, and that the people he serves in his restaurants were “jihadi"—language the Ferguson called “hate speech at its worst.”

In Ferguson’s ruling, she outlined one particular incident when Johnston followed Fakih and his family, including his three young sons, at a mall and called them terrorists as he took photos and videos of the encounter for his online platforms.

Despite the court ordering him to refrain from communicating with, recording or publishing material about, or coming within 100 metres of Fakih, his residence or his family, Johnston was on YouTube hours after the verdict was made public, noting he would pursue Fakih with a citizen’s arrest if there were any inaccuracies in the suit. He also set up a fundraiser on GoFundMe to help raise $200,000 to appeal the $2.5 million libel ruling.

KJJ states he will file charges if there are any mistakes made in the suit, and claims he will pursue a citizens arrest of @mohamadfakih8 if the police do not comply. Ridiculous. /7#cdnpoli #cdnmedia #onpoli pic.twitter.com/F5k5bciz0o

That video and Johnston’s account were taken down by Monday night. His online fundraiser was also shut down.

GoFundMe spokeswoman Rachel Hollis told National Observer in an email that the platform had received many complaints about Johnston’s fundraiser and that no funds had been donated to his cause. “We removed the campaign as it violates our terms of service,” Hollis wrote.

Many members of this Canada's alt-right have used GoFundMe to raise money for activities through which they can spread hate, often by posing as journalists.

We have a zero tolerance policy for hateful speech on our platform and do not condone the behaviour off the platform. We have a dedicated team of trust & safety specialists who work around the clock to actively monitor GoFundMe to remove campaigns and comments that violate our terms of service.

In general, our terms of service dictate what is permitted on the platform. GoFundMe has become part of the social fabric which means some campaigns will be at a point of intersection. This is why we are governed by our terms of service. Each decision relies on multiple considerations, including in some cases decisions made in court of law. We work closely with law enforcement agencies, regulatory authorities and the court of law for guidance.”

In its terms and conditions, the fundraising platform writes that it has the sole discretion to remove any campaigns, including those that are "in support of, or for the legal defence of alleged crimes associated with hate, violence, harassment, bullying, discrimination, terrorism, or intolerance of any kind relating to race, ethnicity, national origin, religious affiliation, sexual orientation, sex, gender or gender identity, or serious disabilities or diseases."

But, this is not the first time GoFundMe has been used by a member of the alt-right group to fund their activities.

Prominent members of the so-called alt-right and other right-wing movements often rely on crowdfunding platforms and online payment processors to fund their causes (and sometimes even their bail and other legal costs). In 2017, PayPal banned or limited the accounts of several prominent people and groups that promote far-right politics. Crowdfunding platforms like GoFundMe, Patreon, and YouCaring have also cut fundraisers for alt-right–associated causes and people.

Despite this ban, alt-right groups appear to be skirting the terms and conditions of crowdfunding platforms. Before the Unite the Right rally in Charlottesville, Virginia in August 2017, for example, white supremacists used GoFundMe to raise money to travel to the city. In some cases, they disguised their fundraisers as "family reunions," which allowed them to evade the rules.

Yellow Vests Canada Exposed—a Twitter account run by three anonymous administrators who document the bigotry and calls to violence that appear on the Yellow Vests Canada Facebook page (which has over 107,000 followers)—has found that many members of this movement in Canada have used GoFundMe to raise money for activities through which they can spread hate, often by posing as journalists.

According to their description, Yellow Vests Canada was created “to protest the CARBON TAX, Build That Pipeline and Stand Against the Treason of our country's politicians who have the audacity to sell out OUR country's sovereignty over to the Globalist UN and their Tyrannical policies.” But YVCE has found that, instead, the group is full of deeply xenophobic and often violent messages, that are very often Islamophobic in nature.

Liz, one of the three anonymous administrators of YVCE, told National Observer that many of the Yellow Vest members have used GoFundMe to raise funds for podcasts, documentaries and town halls to spread these messages.

​For example, Yellow Vests Canada members Rick Boswick and Derek Storie, who proclaim themselves to be "domestic war reporters," have an ongoing GoFundMe campaign to raise $5,000 for their "Facts vs. Feelings" podcast. The two men are also members of a group called Patriotic Europeans Against the Islamisation of the Occident (PEGIDA), a German nationalist, anti-Islam, far-right political movement with chapters around the world. The Canadian chapter had a recent $10,000 GoFundMe campaign shut down for violating terms and conditions (they were raising money to pay damages in a defamation case).

Boswick is a frequent participant in yellow vest events, according to YVCE research, and was seen in Ottawa during the United We Roll convoy in February alongside Faith Goldy, a Toronto white nationalist, who has been appeared in videos made by both men.

The convoy, which travelled from Red Deer, Alberta to raise "awareness for the oil and gas industry" and oppose the Trudeau government's environmental initiatives and Canada’s participation in a non-legally binding UN migration pact, includes people with extreme anti-immigrant and racist views like Goldy, Boswick and Storie. (Incidentally, the convoy also used GoFundMe to raise almost $150,000 of their $250,000 goal to cover their travel expenses.)

YVCE has also seen footage of Boswick and Storie wearing yellow safety vests in a protest an overpass near Toronto days after a white nationalist killed 50 Muslims in Christchurch, New Zealand. Together, they have made several videos bashing Muslim communities. Two weeks ago, Boswick and Storie were filmed burning a Qur'an at a PEGIDA rally in Toronto.

Toronto activist Kevin Metcalf encountered Boswick and Storie on May 10 outside a courthouse in Brampton, Ont. where he was getting an update on his own defamation suit against Johnston.

Metcalf told National Observer the two men followed him while filming and shouted questions at him about whether he was a supporter of Islamic terrorism. Two months ago, they filmed Melcalf at a rally against racism in Toronto and made his address and social media accounts publicly known. Metcalf received threats from the two men and their supporters that involved physically harming him.

On May 10, Metcalf called the police, who are investigating the matter.

GoFundMe did not answer questions about Boswick and Storie's fundraiser, which is still active. In an update posted on the fundraiser four months ago, Boswick says "I'm pleased to announce that Derek and I are now trying to raise funds for a Yellow vest/convoy cross Canada documentary. Free to all but (sic) we need your help to get out there and eat on the road."

"GoFundMe needs to remove this campaign, and stop allowing hate groups to crowd source on their platform," Liz of YVCE told National Observer.

On Monday night, after all of Johnston's social media accounts and his fundraiser were taken down, Johnston was on a live Facebook video with Storie and Boswick on their Facebook page in an attempt to raise awareness—and funds—for a documentary, while calling Fakih a "jihadi" once again.

That video was taken down on Thursday after National Observer asked Facebook if it met its Community Standards related to hate speech. Under its hate speech policies, Facebook prohibits calls for violence or dehumanizing references based on people's immigration status. The social media giants says that it proactively identifies and removes much of this content, and recognizes these efforts aren’t perfect. This includes for white supremacist material.

In the third quarter of 2018, Facebook says it took down 2.9 million hate speech posts, 52% of which were identified through its proactive detection technology, although incidents are reviewed on a case-by-case basis as well.

“We do not tolerate harassment or hate speech on Facebook. That’s why we remove content, disable accounts, and use a combination of technology, reports from our community, and human review to enforce our policies," a Facebook spokesperson told National Observer in an email.

But, YVCE believes that crowdfunding platforms and social media organizations need to start looking into the people creating funds, rather than just the funds itself, to understand the true motives of some of the campaigns and materials members of the alt-right create.

One month ago, Alberta resident Pat King and Saskatchewan resident Jay Riedel set up a GoFundMe campaign to raise $10,000 for a cross-country tour they're calling "Rollin' with Pat and Jay." According to the details of their campaign, they're looking to fund travel to hold town hall meetings across Canada to “educate” Canadians on various issues they find important. Both men are members of Yellow Vests Canada. A deep dive by YVCE has found that these town halls discuss their experiences with United We Roll campaign, as well as extensive discussion of their anti-refugee sentiments and other far-right ideas.

"With the advent of all these new mediums and platforms, organizations like GoFundMe need to crack down on who is using them and for what purposes, and revisit their protocols," Liz said. "GoFundMe has a specific terms and conditions and its broken all the time."

Scheer portrays himself as anti-fascist