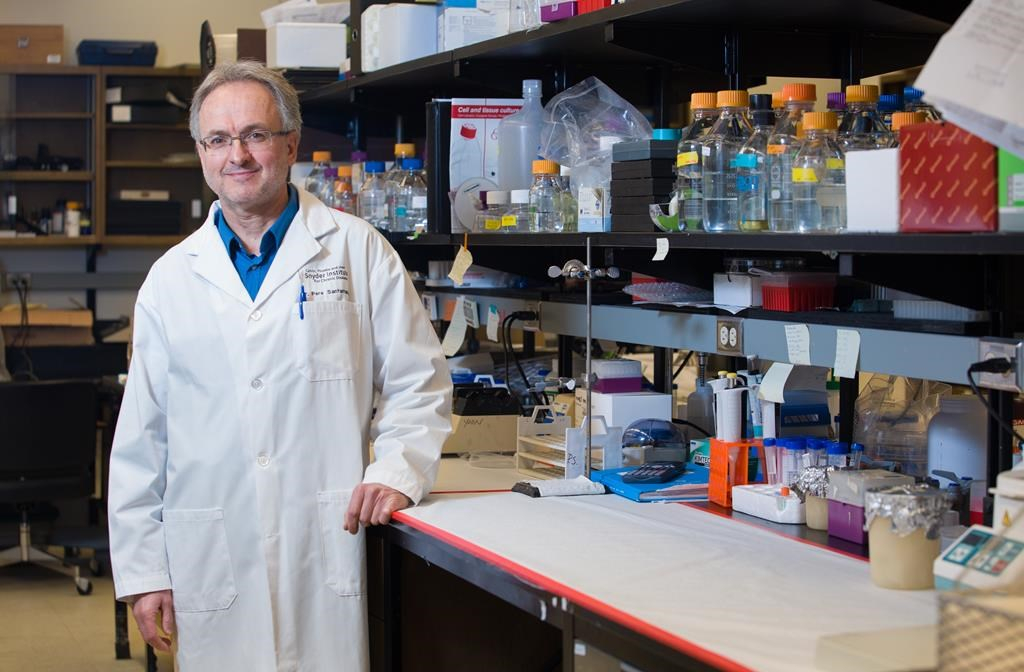 Dr. Pere Santamaria, a professor in the Department of Microbiology, Immunology and Infectious Diseases, and member of the university's Snyder Institute for Chronic Diseases, poses in this undated handout photo by University of Calgary, Riley Brandt
Previous story
Next story

A University of Calgary researcher says he's hopeful a deal worth up to $1 billion between his drug company and a U.S. biotechnology firm could one day lead to autoimmune disease treatments that don't make patients more vulnerable to infections or cancer.

Parvus announced a working and licensing agreement Thursday with California-based Genentech to develop, manufacture and commercialize a class of drugs known as Navacims to potentially treat celiac, autoimmune liver and inflammatory bowel diseases.

Parvus is to get an upfront payment from Genentech and further payments as certain milestones are reached. The companies are not disclosing precisely how the funds are to be broken down or over what time period. Parvus is also eligible to get royalty payments on sales that result from the deal.

The immune system is meant to protect the body from bacteria, viruses and cancer. But in people with autoimmune diseases, the body's own tissues are mistaken for harmful invaders and attacked.

Current treatments work by suppressing the immune system as a whole, which makes patients less able to fight off infections and cancer.

Navacims, discovered by Santamaria and his team in 2004, use nanoparticles to switch off autoimmune attacks in a way that doesn't compromise the body's overall disease-fighting abilities.

Santamaria said the treatments have been tested extensively in mice with promising results. The deal with Genentech will go toward clinical trials in humans. Parvus will be responsible for initial small-scale tests. Genentech will take on subsequent studies in larger groups and, if successful, the regulatory work needed to bring the drug to market.

The companies aren't disclosing when the trials will be done, but Santamaria said time is of the essence.

"It'll take some time, but resources will be brought to bear so that this can be accelerated as fast as we can to get these drugs to patients in need."

Parvus teamed up with another drug firm, Novartis, in 2017 to develop Navacims as a potential treatment for Type 1 diabetes.

Santamaria said bringing Navacims to market without the resources and know-how from larger partners would be inconceivable.

"It's been a tough, long haul with a lot of challenges and hurdles in many aspects."

University of Calgary president Ed McCauley said the big-ticket investment affirms how important it is to invest in fundamental research.

"It's incredible," he said. "The discoveries we are making are actually being mobilized to help society."

Save money, save lives: Four steps for Ottawa to link health and the environment