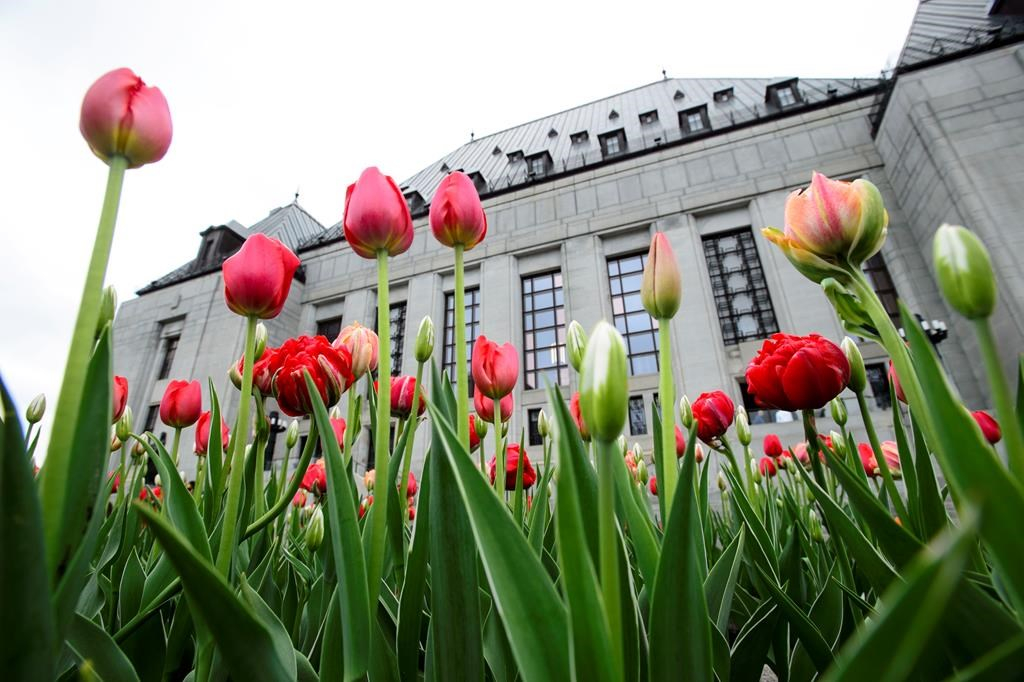 Tulips bloom outside the Supreme Court of Canada in Ottawa on Friday, May 24, 2019. Photo by The Canadian Press/Sean Kilpatrick
Previous story
Next story

Ontario trucker Bradley Barton should be retried for manslaughter, but not murder, in the case of Cindy Gladue, who bled to death in the bathroom of his Edmonton motel room, the Supreme Court of Canada has ruled.

In a 4-3 decision Friday, the high court said evidence about sexual history was mishandled at the original trial that ended in Barton's acquittal on a charge of first-degree murder.

Barton acknowledged hiring Cindy Gladue for sex in 2011 and claimed the severe injury to her vaginal wall that caused her death was an accident that took place during rough but consensual activity.

The Crown argued that Barton intentionally wounded Gladue and was guilty of first-degree murder or, at the very least, manslaughter, because the 36-year-old Metis woman had not consented to the activity.

Barton was found not guilty by a jury that repeatedly heard references to Gladue as a "prostitute" and a "native." The Alberta Court of Appeal set aside the acquittal and ordered a new trial for first-degree murder.

A majority of the Supreme Court said Barton's new trial should be restricted to the offence of manslaughter, as the procedural errors at the original trial did not taint the jury's finding on the question of murder. The minority said he should be retried with both manslaughter and murder as possible verdicts.

Writing on behalf of the majority, Justice Michael Moldaver said the criminal justice system did not deliver on its promise to provide Gladue with the law's full protection and "as a result, it let her down — indeed, it let us all down."

"Her life mattered. She was valued. She was important. She was loved. Her status as an Indigenous woman who performed sex work did not change any of that in the slightest."

The initial trial sparked widespread public concern about how alleged victims of sexual assault, particularly Indigenous women, are portrayed in the courtroom.

"When Indigenous women are brought in as victims to many of these kinds of incidents ... they're often perceived almost like they're the criminal and that they have to defend themselves, and Cindy, in her death, couldn't defend herself," said Melanie Omeniho, president of Women of the Metis Nation, who was at the Supreme Court for the decision. "So, we're grateful that there's going to be some seeking justice for Cindy and her family."

It's not uncommon for cases involving the deaths of Indigenous women to go through multiple appeals and retrials, Omeniho said, as difficult as that is for victims' families.

Also there for the ruling was Qajaq Robinson, a commissioner in the national inquiry into murdered and missing Indigenous women, which is due to report early next month.

"I think it's a step forward that the court has recognized that in cases of sexual assaults involving Indigenous women and girls, that there's an obligation on courts, on judges, to be gatekeepers — to ensure that bias, prejudice, racism and sexism do not form part of the evidence, are not what juries and judges rely on to make their decisions," she said. "This is a big step forward."

She agreed with Omeniho that women who encounter the criminal-justice system often feel reduced to stereotypes and that "they do not get the justice that other Canadians get from the system."

Two experts testifying at the original trial for the Crown said the 11-centimetre cut in Gladue's vaginal wall was caused by a sharp instrument. A defence expert said the injury was a laceration that resulted from blunt-force trauma. In the 2015 trial, the Crown showed the jury Gladue's preserved vaginal tissue as an exhibit in an effort to explain her injury; the extraordinary move also raised complaints that it contributed to dehumanizing her.

Barton, who hired Gladue for two nights of sex, testified that he put his fist in her vagina on both occasions, but on the second night she started bleeding.

Barton said when he woke up the next morning he found Gladue dead in the bathtub.

In its decision, the Supreme Court said the trial judge failed to apply provisions in the law that limit the extent to which an alleged victim's sexual history can be discussed during proceedings. The intention is to avoid an inference that, due to the nature of that history, the person is more likely to have consented to the sexual activity in question or is less worthy of belief.

The court said these provisions should have been followed before introduction of evidence about Gladue's sexual activity with Barton on the first night.

If any of the evidence had then been deemed admissible, careful instruction by the trial judge was essential to ensure the jury understood the permissible uses of that evidence, the Supreme Court added.

Barton's lawyer, Dino Bottos, said Friday it is disappointing his client must return to court on a charge of manslaughter "but it's a far, far better result than having to go back to trial on first-degree murder."

"It's pretty early to say, but I intend to simply have Mr. Barton tell his story once again," Bottos said. "The jury believed him the first time. There should be no reason why a jury wouldn't believe him a second time."

Chantal Stormsong Chagnon: Out of the frying pan and into the 8th Fire