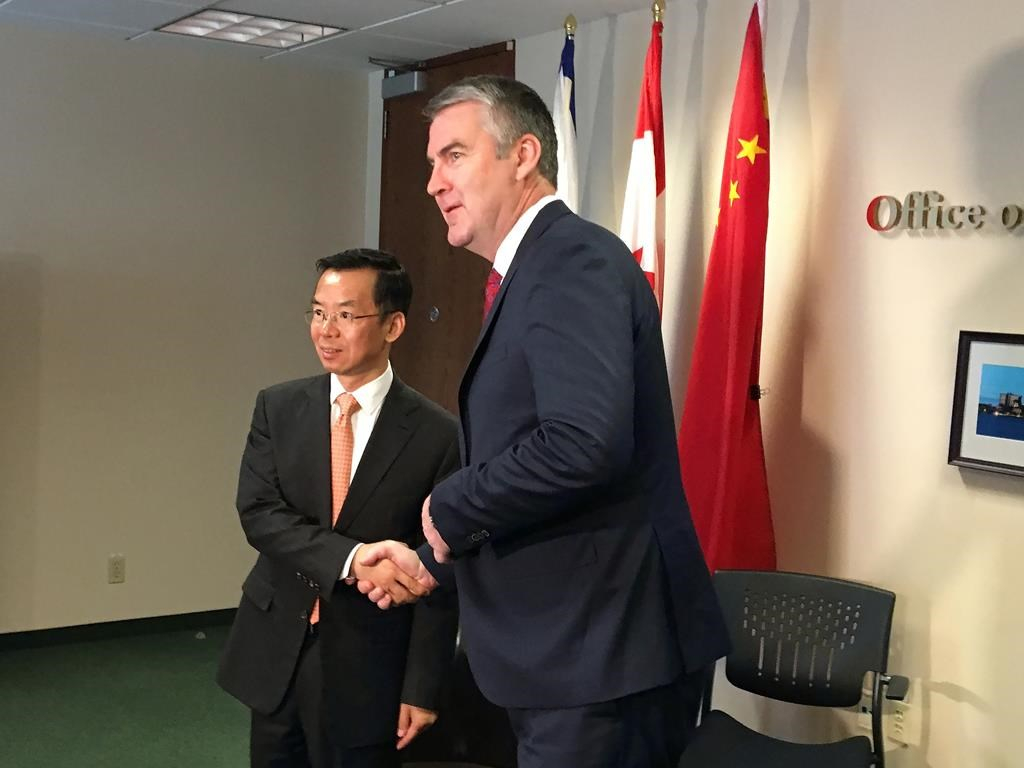 Lu Shaye made the comment during a photo opportunity that was held before the diplomat met Wednesday with the premier and several members of his cabinet.

"I think Nova Scotia and Mr. McNeil is on the forefront of co-operation with China amid all provinces in Canada," Lu told reporters, who were not given the chance to ask questions during the photo session.

Lu was previously in Halifax for meetings with provincial officials in November 2017, as the province pushed to expand its trade ties with China.

"I come to Halifax, Nova Scotia to meet again with my great friend Premier McNeil to host together the second working dialogue between the Chinese embassy and the provincial government of Nova Scotia," he said. "I'm sure that the dialogue today will also be fruitful."

The meeting comes as tensions remain high between Canada and China following the December arrest in Vancouver of Huawei Technologies executive Meng Wanzhou after an American request for her extradition.

In a prepared text for a speech last Thursday, Lu remarked that he was saddened Canada-China relations are at a "freezing point."

However, McNeil, who has made seven trips to China since taking office in 2013, said Lu has been "a champion" of expanding trade ties between his province and China's Guangdong province, where Nova Scotia exports large quantities of seafood.

He also said the ambassador was a "great help" to the province in ensuring that an art exhibition featuring the works of famed folk artist Maud Lewis and six other female artists went ahead last month at the Guangdong Museum of Art after it had been abruptly postponed in March.

"I look forward to very productive meetings today and continuing to build on what has become a very positive working relationship and friendship," McNeil said.

The premier didn't take questions from reporters, and a spokesman confirmed there would be no availability offered later in the day.

McNeil returned from his latest trade mission to China just two weeks ago, telling reporters it was better to maintain a dialogue and to try to build relationships despite the worsening relations.

"Not having a conversation solves nothing," he said at the time.

During Wednesday's meeting, officials, including five members of Nova Scotia's cabinet, were expected to discuss a range of trade ties related to areas including seafood and agriculture, education, mining, and tourism.

Both Lu and McNeil were expected to appear later Wednesday at a dinner in Halifax to officially launch the Atlantic chapter of the Canada China Business Council.

While clear-cutting our Acadian Forest in Nova Scotia...& selling it as wood chips to China for 'renewable' energy called biomass....which is less efficient than burning coal !