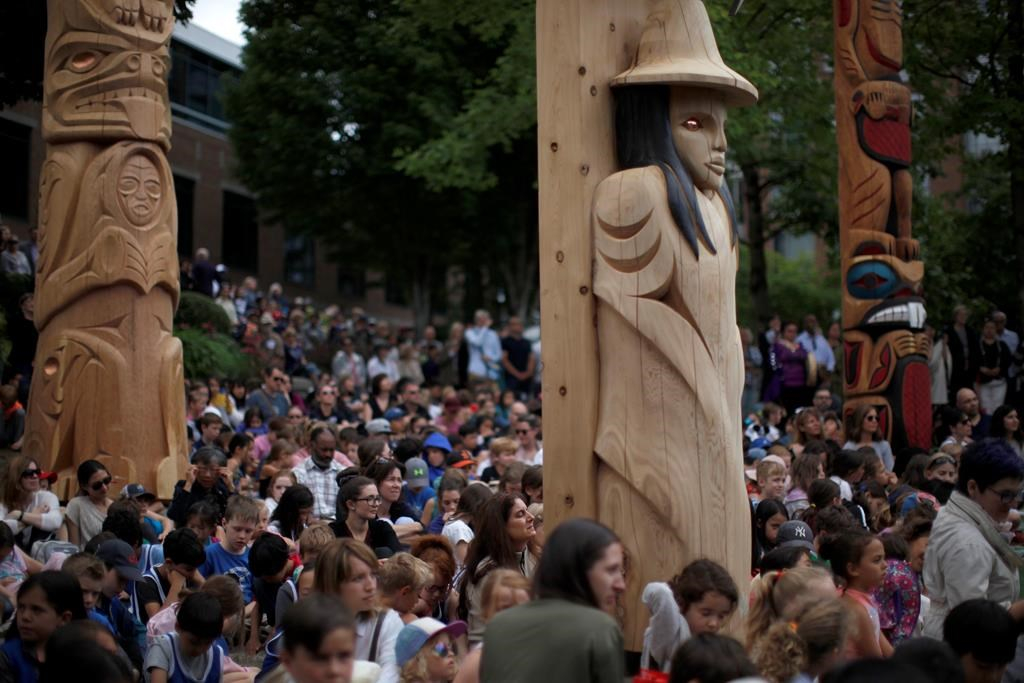 One Reconciliation Pole and two Welcome Figures were unveiled during a ceremony in honour of truth and reconciliation on National Peoples Indigenous Day at the Vancouver School District in Vancouver, B.C., on June 21, 2019. Photo by The Canadian Press
Previous story

Musqueam artist William Dan says a welcome figure he carved from centuries-old cedar represents a homecoming for him, after a childhood lost to residential school and decades spent away from his traditional territories.

The figure was one of two unveiled Friday alongside a 13-metre reconciliation pole outside the Vancouver School District's Education Centre. The event marked National Indigenous Peoples Day and attendees reflected on the meaning of reconciliation.

"Reconciliation is always hard for me because I was one of them who went to the boarding schools," Dan said in an interview. "It's hard for us to get over that. I'm almost 70 years old and I still got issues on me. They really beat you down to the core.

"For me, I just wanted to do something for my tribe. While you're away at boarding school, all you want to do is go home to your parents. That's what I wanted."

Dan joined artists, local First Nations, school board officials, teachers and students to honour the three poles. The event was one of many held across Canada on Friday, including a sunrise ceremony in Toronto, a totem pole unveiling in Whitehorse and the renaming of a street in Montreal.

Vancouver Granville MP Jody Wilson-Raybould attended the event in the city and she became emotional while listening to a young Indigenous student read a poem about missing and murdered women and girls.

With tears in her eyes, Wilson-Raybould told the crowd that she was raised by her grandmother and parents to be proud of who she is and know where she comes from.

"Today, on Indigenous Peoples Day, we celebrate and thank all the generations that come before us, that have persevered, that have been resilient and proud and fiercely determined to create a more just Canada. And we are on our way," she said.

Wilson-Raybould, who was ejected from the Liberal caucus amid the SNC-Lavalin controversy and is running in the fall election as an Independent, thanked the Vancouver School District and the artists for their work.

"My vision for reconciliation is that we are all one, that we see Indigenous Peoples in this country — First Nations, Metis and Inuit — surviving and thriving off the lands where they have survived for millennia," she said.

"Then we will all be one. Then the country will be the amazing country it was intended to be."

The school district said the reconciliation pole and two smaller welcome figures, one male and one female, are carved out of cedar logs that are 300 to 500 years old. The poles represent a national first for an education institution and will remain at the site for 150 years.

Squamish artist James Harry carved the bottom of the reconciliation pole while his father Xwalacktun carved the top. The upper half features a thunderbird with wings that turn into hands holding onto the earth, symbolizing healing, and a frog that represents communication of what must change, Xwalacktun said.

"We didn't do anything wrong to reconcile, but we need to move forward and have dialogue," he said. "This totem pole is going to help make those changes for many generations to come."

Harry said the bottom half features a bear, representing strength, and an eagle symbolizing vision and wisdom. He also included a woven pattern to represent the strengthening of connection between Indigenous and non-Indigenous people.

Harry added that he hammered a loonie into the top so that when the pole comes down in 150 years, people will know which year it was made.

Chrystal and Chris Sparrow designed the female welcome figure and said it is for First Nations and non-First Nations women.

"I think that's such an important step moving forward, that we start working together and start recognizing each other as equal, as friends," Chrystal Sparrow said.

"We have to recognize that today we're worried about the killer whale, the resident killer whale that is so famous in our storytelling here, because one day they may not be there," Grant said.

"As we move toward economic development and the pipeline and whatnot, they may vanish," he said, referring to the planned expansion of the Trans Mountain pipeline. "So these are photographs of a moment in time for us."