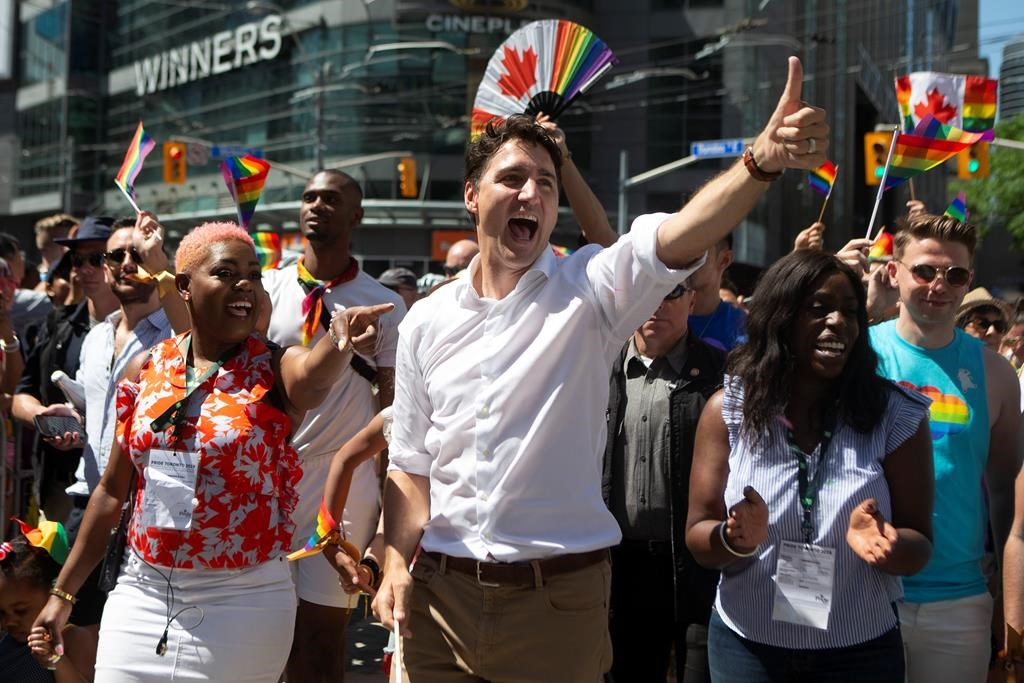 Toronto was abuzz on Sunday as a colourful crowd lined downtown streets to celebrate all things LGBTQ at the city's annual Pride parade.

Prime Minister Justin Trudeau, who marched in the parade with some of his cabinet ministers and Toronto Mayor John Tory, extolled the importance of celebrating Pride.

"It's a wonderful privilege to again be walking in Pride here in Toronto, Canada's largest Pride parade," he said. "As prime minister I think it's important not just for everyone who is out here today celebrating, but to the people at home — young people especially who are still worried about coming out."

The prime minister waved and blew kisses to the crowd as he marched, shouting "Happy Pride!" and stopping to shake hands with attendees on both sides of the street.

"Hi, happy Pride! I hope you have sunscreen on!" Trudeau told a young boy along the route.

This year's parade was missing Premier Doug Ford, who has said he wouldn't participate because uniformed police officers were excluded from the event for a third year in a row.

Uniformed officers were first banned from the parade in 2017 over concerns of racial profiling, and were banned again in 2018 over criticism the force had not taken the disappearances of several men missing from the city's gay village seriously.

The leadership of Pride Toronto had initially invited officers to apply to march in this year's parade, but the membership narrowly voted to bar police once again.

Thirty-six-year-old Ryan Singh, who has been attending Pride for 17 years, said he felt safer without uniformed cops at the parade.

"I think police have a lot of work to do in order to reconcile with our community," he said. "They've done a lot of harm before and including the McArthur case."

He said it's important to focus on the LGBTQ community's fight for acceptance every year, but this year has a special significance.

It's the 50th anniversary of the Stonewall Riots, which saw members of the LGBTQ community — particularly transgender women of colour — clash violently with police as officers raided the gay-friendly Stonewall Inn in New York City.

"I just think knowing that this community has been resilient for so long — even before Stonewall — and being aware of that history and marking that history is so important," Singh said.

But Kiki Jahan, who's been attending Pride for about 11 years, said he hoped uniformed police would be allowed back into the parade in the future, noting that LGBTQ cops should be allowed to celebrate both parts of their identity.

"It makes me sad they’re not allowed," the 38-year-old said. "I think they should be out here celebrating who they are."