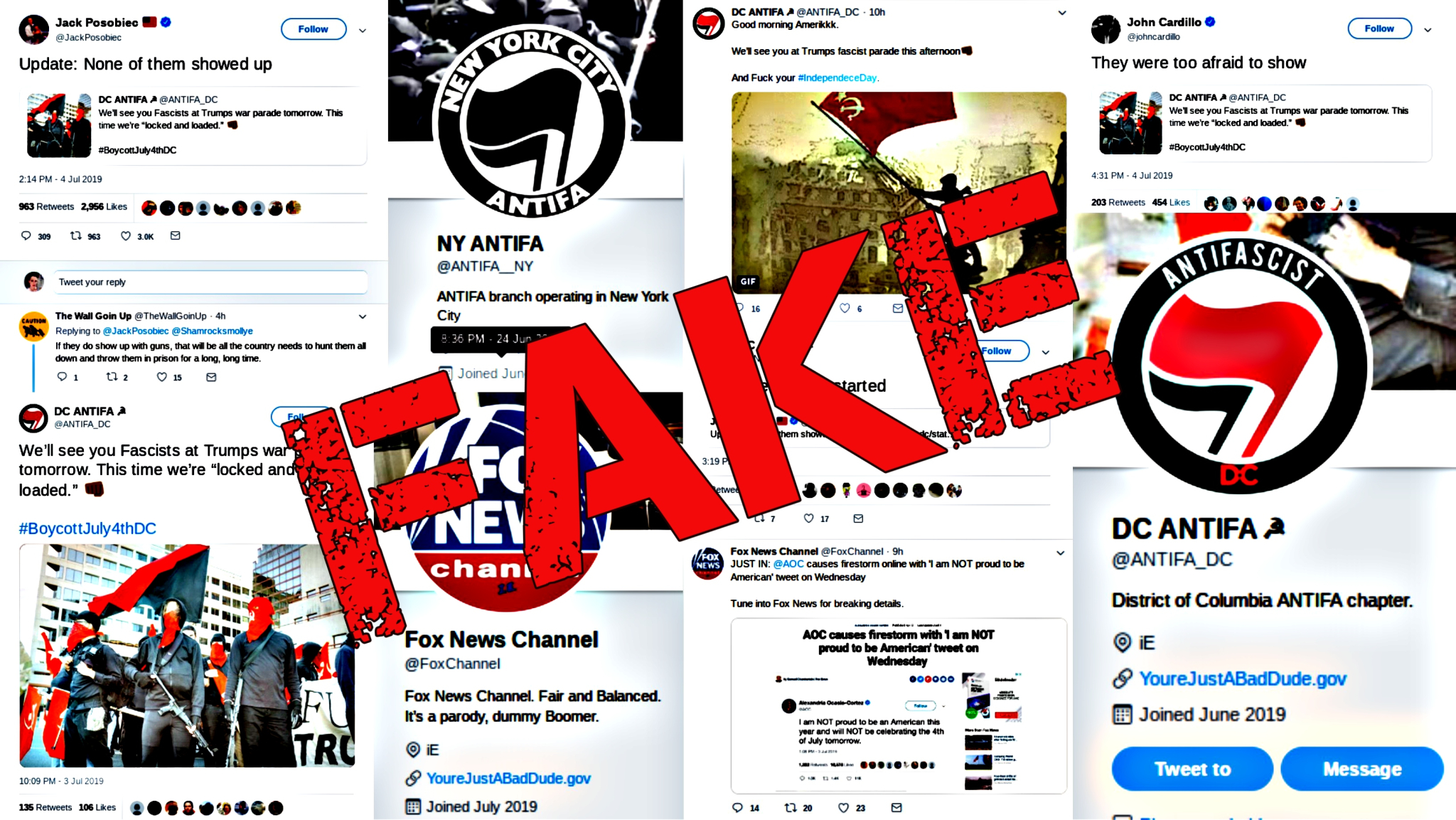 An ongoing disinformation campaign aimed at antifa — shorthand for antifascist or antifascism — took a new turn Thursday as freshly created fake Twitter accounts spread false and inflammatory information about antifa’s plans for the Fourth of July.

One of the fake antifa accounts, @ANTIFA_DC, shared information suggesting antifascists were planning to disrupt a parade in Washington, D.C., writing: “F-ck the #TrumpParade. See you in the street, fascists."

“Fight us, fascists,” the account wrote. Another tweet included a graphic for a fake antifa event called the “Stop the Fascists Parade.”

Other tweets from the fake antifa account espoused anti-American sentiment while some took on a more sinister tone.

“We’ll see you Fascists at Trumps war parade tomorrow. This time we’re ‘locked and loaded,’” the account tweeted on July 3.

The fake Fox News account shared content including a fabricated tweet from Rep. Alexandria Ocasio-Cortez (D-NY) and a fabricated news story designed to look like it was a Fox News article. The headline of the article claimed an “antifa website” had called for “armed protest” at the Fourth of July parade in Washington, continuing a misleading narrative aimed at portraying antifascists as ultra-violent and dangerous.

The account proceeded to go back and forth with Posobiec in a series of exchanges, gaining more attention and more traction over several hours.

It would be easy to shrug these accounts off as harmless parodies, but the responses to their tweets show a lot of people are taking them seriously — and in many instances, they’re provoking anger and even suggestions of violence.

“If they do show up with guns, that will be all the country needs to hunt them all down and throw them in prison for a long, long time,” one user wrote in response to Posobiec’s quote-tweet of the fake @ANTIFA_DC account.

Fake antifa accounts have been used in the past to share similar inflammatory content, seemingly in an attempt to portray antifa as a dangerous and violent movement. The same network of fake accounts also spread disinformation aimed at confusing people and skewing perceptions of the antifascist movement.

Far-right extremists are trying to use the unsubstantiated “cement milkshakes” rumor as a justification for shooting and killing #antifa.

Here’s a bunch of them explicitly stating their intent/desire to do so. pic.twitter.com/zGn9NOPimz

While the accounts in this network may be fake, the consequences of the disinformation they're spreading are very real.

So you’ve been blocked by a politician. What now?