More 'work to do' to mobilize Canadians on climate change action: Trudeau 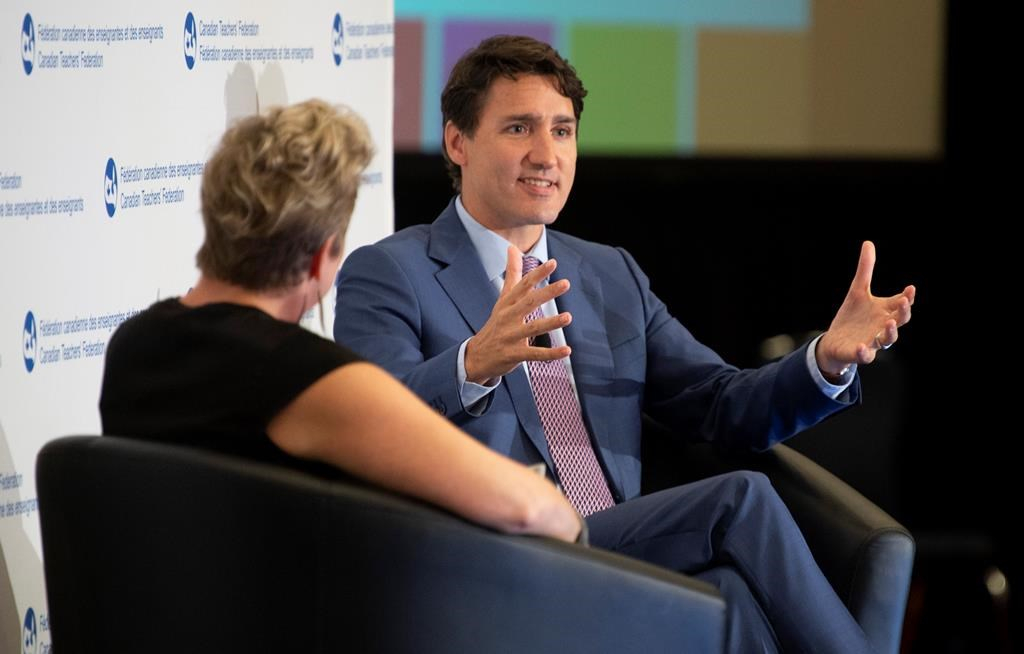 Prime Minister Justin Trudeau acknowledged Thursday that he has more work to do to sell Canadians on further actions to fight climate change, pointing to new premiers elected on vows to fight his government's agenda.

Trudeau addressed the issue at the annual general meeting of the Canadian Teachers' Federation, where he took part in a one-on-one conversation in front of union representatives.

The prime minister said it's clear from public-opinion polls that most Canadians are concerned about the environment and want measures to protect it.

But that desire isn't always reflected in their votes, he said, when voters "turn around and elect climate-denying provincial premiers right across the country from the Rockies to the Bay of Fundy."

That's why "there is work to do in bringing Canadians to a place of understanding" that fighting climate change is part of creating a better future for children and a better economy, Trudeau said.

"And I know very few Canadians want that."

In a statement, Conservative environment critic Ed Fast said climate change was a "real and pressing threat," but the government's plan was more about taxes than the environment, and would not help the country hit its emissions targets.

"All it does is make life harder and more unaffordable for Canadians by increasing the price of gasoline and home heating costs," Fast said.

The Conservative climate plan emphasizes the global aspect of climate change and would save more money for Canadians, he added.

Trudeau reiterated his government's commitment to combating climate change, citing the federal price on carbon, a coming ban on single-use plastics as early as 2021 and the Liberals' ocean protection plan.

He said there is "lots more to do" after this fall's election without providing specifics. Instead, he highlighted the importance of "bringing Canadians along" to build a consensus on further climate action.

Pretty ironic, isn't it: the

Pretty ironic, isn't it: the PM who bought us TMX, and got sucked in by a spurious cap on Alberta emissions (if he actually believes what he says), and is concerned that the electorate might not care enough or be well enough informed!
Someone needs to challenge him every time he speaks of "the environment" to quit using that as a weasel-word to sidestep the explicit "climate change" piece of "the environment."
It's a diversion. So is targetting plastic bags, in particular, when it's the "beaded" form of plastics that's most harmful, and biodegradable plastic bags are readily available. Not that plastic bags aren't rightfully an issue, but it's a bit like complaining that cottonwood fluff is flammable in the face of a wildfire.
It's time for the electorate to organize some kind of vote-trading between NDP and the Greens, to keep idiocy from prevailing when it comes to tarsands. Because Nero's fiddling while Rome burns and everyone else is encouraged to eat, drink and be merry while the party lasts.