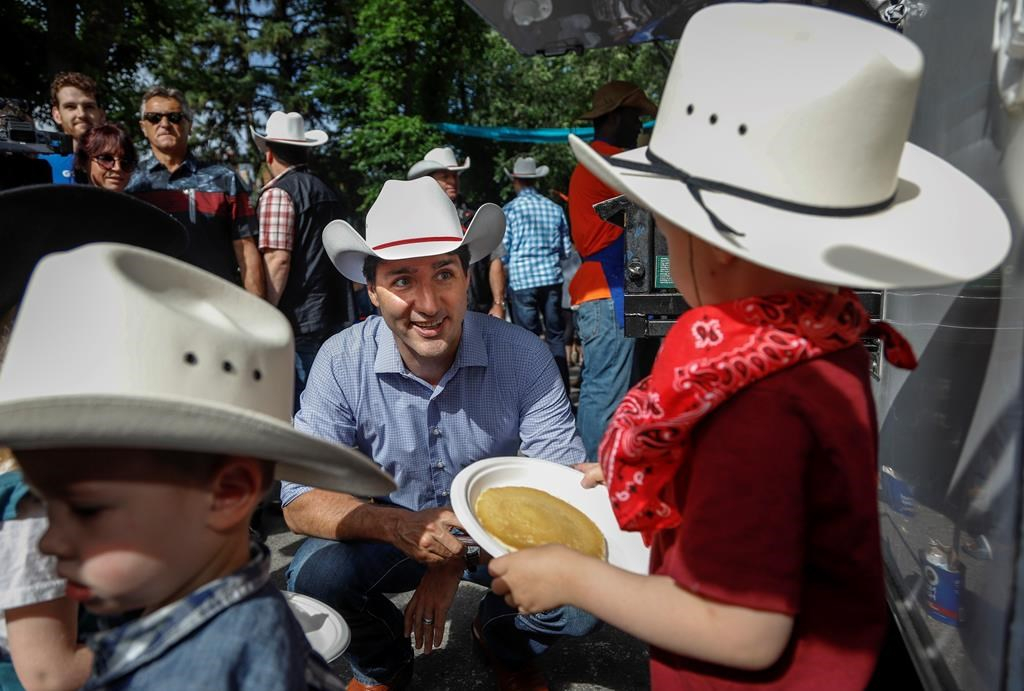 Prime Minister Justin Trudeau has told Liberal supporters their party is best positioned to get major projects like the Trans Mountain pipeline expansion built because it's able to take "difficult compromise positions" between growing the economy and protecting the environment.

Trudeau made the remarks at a donor reception Saturday during his annual Calgary Stampede visit, which included fewer public events than in the past.

"Compromise is actually harder and more courageous than sitting on one end of an issue, crossing your arms and saying 'I'm standing on my principles and I'm not moving,' because that doesn't actually require you to listen to another point of view," he said at a cafe on the 21st floor of a downtown office tower.

A small group of yellow-vest-clad demonstrators held anti-Trudeau signs with crude slogans on the plaza below.

"I can guarantee you all the signs people are waving downstairs on the sidewalk, none of them say 'Make a smart compromise. Be reasonable,'" Trudeau said.

Anger has been simmering in Alberta over the government's handling of the pipeline file and carbon tax, as well as recently passed legislation overhauling environmental reviews and banning oil tankers from B.C.'s north coast.

The expansion to the federally owned Trans Mountain pipeline would enable more Alberta crude to flow to the B.C. Lower Mainland, and on to export markets across the Pacific. The federal cabinet approved the project for a second time last month and said it would invest proceeds in green initiatives.

Trans Mountain got its initial green light in 2016, but the Federal Court of Appeal said more work needed to be done on Indigenous consultation and wildlife impact studies.

Ottawa bought the existing pipeline last year after its previous owner, Kinder Morgan, said it would walk away if political roadblocks in B.C. weren't cleared. Trudeau said in Edmonton on Friday that shovels would be in the ground "later this construction season."

"But those are the voices on the fringes ... Canadians know that the way we succeed is by pulling together and being thoughtful about the path forward."

At an earlier community Stampede breakfast, Isabelle Reynolds angrily confronted Trudeau over the arrest of Mi'kmaq grandmothers protesting the Alton Gas project north of Halifax this spring. The company's plans to store gas in caverns have stoked environmental concerns.

"The federal government, the provincial government continue to ignore the treaty on that land," said Reynolds, who goes to university in Nova Scotia.

Reynolds said she didn't know the prime minister would be at the breakfast.

"I had an opportunity to approach him and I decided to," she said. "It's funny — last year he was here and I was excited. This year, not so much."

Trudeau spent this year's Stampede visit in the Calgary Centre riding, the only seat in the city held by a Liberal. On Friday he mingled at a downtown diner over the lunch hour with MP Kent Hehr before heading into private meetings.

Past years' visits have included multiple breakfasts combined with stops at the Stampede midway and rodeo.

Trudeau shrugged off suggestions the Liberals are in trouble in Alberta ahead of October's federal election.

"We are going to not just bring back our MPs, but bring back more MPs to Ottawa," Trudeau said.

Mr Trudeau thinks he is a

Mr Trudeau thinks he is a leader, but what is the value of action that is far too weak, far too slow, and enfeebled further by measures that extend and deepen Canada's investments in fossil fuels?

He is making the same error as the leader of the Labour party in the UK, who thinks that by failing to take a decisive stand for or against Brexit, he can sew up votes from both sides of the debate. In actual fact, he satisfies no one sufficiently, and demonstrates self-serving hypocrisy to everyone.

It was time for a balanced approach 5 decades ago. Now, faced with extinction of our and numerous other species this century, it is time for decisive action to move away from fossil fuels, as fast as we can possibly navigate this path forward.

Hard to know if Trudeau just doesn't get it, or is open to bad self-serving advice from the same fossil fuel propagandists and profiteers that have delayed our essential actions by 5 or more decades already. Either way, he is not leading, but being misled. Being less atrocious than Kenney, Trump, Moe, and Ford is not nearly sufficient in these times of overwhelming threat to civilization and survival.

"... the people who are angry about TMX don't spend any time saying, 'Well, thank you for putting a price on pollution and protecting our oceans,'" (Trudeau) said.
"But those are the voices on the fringes ..."

So Trudeau thinks non consenting First Nations and some 28,000 who have signed pledges to do whatever peacefully possible against the TMX pipe dream are "voices on the fringes", somehow equivalent to Big Oil and their sycophants? Nice to know his true colours.

How about creating a balance

How about creating a balance by promoting an increase in green energy sector jobs and retraining oil patch workers to fill those jobs. Come on Justin, even children can figure this out. Fossil fuels are going the way of the horse and buggy. This is real. It is global. Canada needs to be a committed leader and not a smug lag behind.