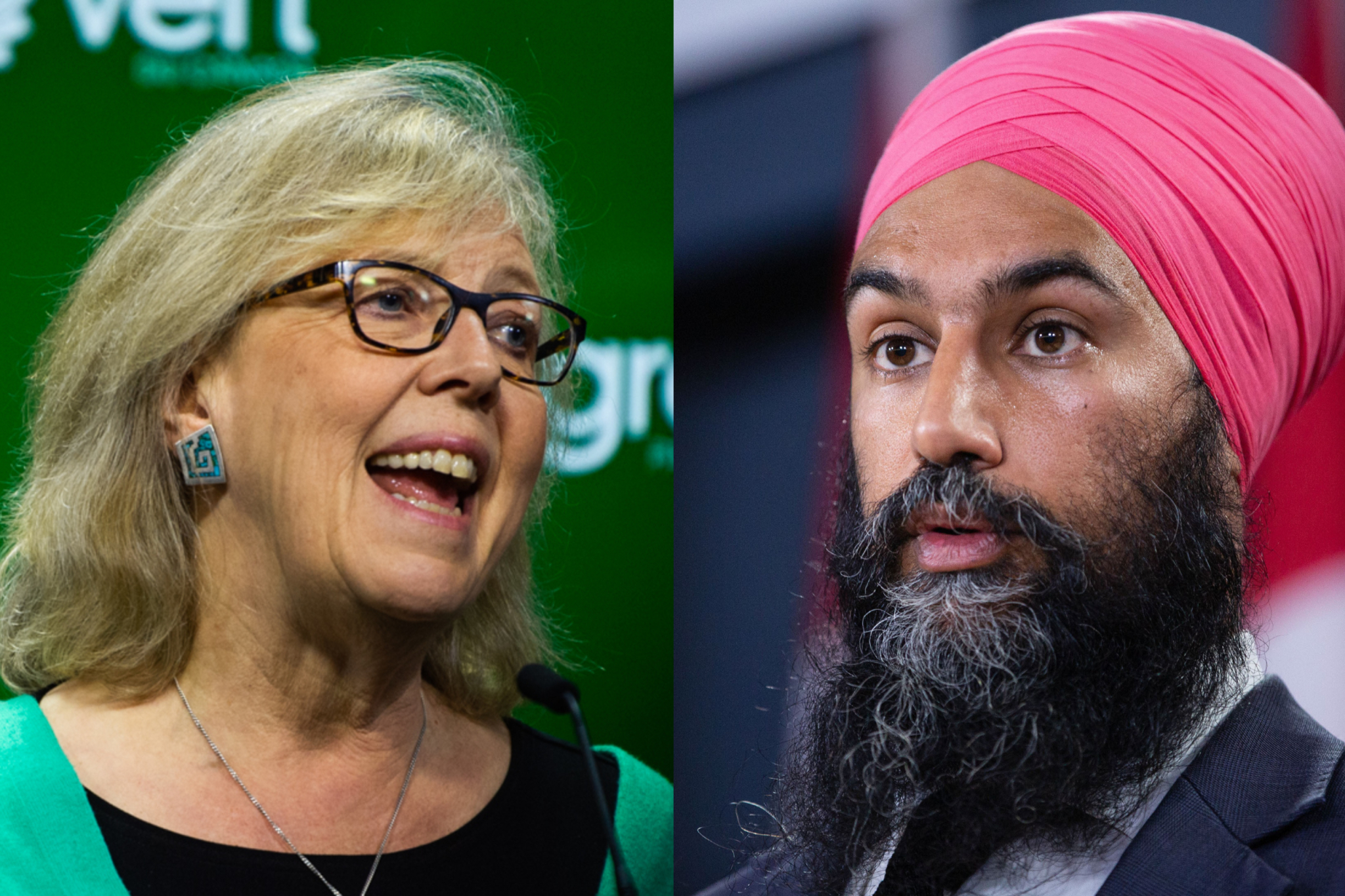 The federal Green Party pulled in more donation money than the New Democrats during the second quarter of 2019, a sign that the wave of momentum attributed to the Greens this spring also brought valuable fundraising dollars.

Between April and June, the Green Party raised about $1,437,722, beating the NDP’s $1,433,476, according to financial statements posted to Elections Canada’s website on Wednesday. The NDP did, however, have 14,936 contributors, overtaking the Green Party’s 14,616.

The NDP currently hold 41 seats in the House of Commons, while the Greens has two members: Saanich—Gulf Islands MP Elizabeth May, the party leader, and Nanaimo-Ladysmith MP Paul Manly, who was elected on May 6, becoming the second elected Green MP.

Neither party has formed government at the federal level.

“Canadians are recognizing the (Green Party) as the progressive vote and the fundraising numbers show that,” Green Party spokeswoman Rosie Emery told National Observer. “We have a plan and a leader that have captured the imagination of Canadians.”

The fundraising totals were nearly double what the Greens raised during the first quarter of the year. They’re also well above the $760,475 the party raised during the same three-month span in 2015, the last election year.

As the October federal election draws nearer, the NDP and party leader Jagmeet Singh have come under fire for lagging donation numbers and weak support in the polls. In early July, the Huffington Post reported that Singh had only been to one fundraising event in 2019.

In a statement, the NDP said its fundraising totals were “better than projected” and “one of the best second quarters” the party has had in the past decade.

“Our numbers mark an increase compared to last year and compared to 2017, and they’re better than this year’s first quarter,” the statement read. “Across every fundraising method we track — online, on the phone, through the mail — all are tracking up, quarter after quarter.”

But comparing the NDP's current fundraising numbers to 2017 or 2018 is "a stretch," as parties usually double or triple their donations during an election year, said Jared Wesley, a political scientist at the University of Alberta.

The @CanadianGreens pulled in more donation money than the @NDP during the second quarter of 2019, a sign that the small but ascendant Greens are gaining momentum. Story by @EmmaMci #cdnpoli

“It's hard to craft a narrative that has the NDP feeling proud,” Wesley said.

Though money doesn’t predict election success, it is an interesting indicator of momentum, he added: “The fact that Canadians are more willing to donate to the Greens than ever suggests something interesting… this is only going to be a positive boost for the Greens."

“(The NDP) have a fundraising problem," said University of Calgary political scientist Melanee Thomas. "I don't see any other plausible explanation for it."

Greens in the spotlight while NDP 'languishing'

It’s not immediately clear if the Green Party’s fundraising surge has been driven by people who haven’t donated money before, regular donors upping their contributions or NDP supporters who’ve switched sides.

A party’s financials can indicate the type of support it’s receiving, Thomas said.

The increase in donations flowing to the Greens this spring appeared to coincide with a wave of enthusiasm for the party.

In April, the Green Party became the second-largest in Prince Edward Island’s provincial legislature, forming the official opposition. The next month, Manly was elected, doubling the Green caucus.

This spotlight hasn’t been without controversy. Earlier this month, the Greens took some heat for the hire of former Liberal strategist Warren Kinsella.

The party’s relationship with Kinsella has now ended, the Toronto Star reported Tuesday, and donations in the quarterly statement were all made before he was hired.

Some inside the party have also been unhappy with the federal Greens’ willingness to allow energy companies in Alberta’s oilsands to continue operating, according to the newspaper.

Still, the Greens are polling at an average of nearly 11 per cent, up from about seven per cent in March according to CBC’s poll tracker. The NDP’s current average is about 14 per cent.

The numbers show a “languishing” NDP, said Lori Williams, a professor of policy studies at Mount Royal University in Calgary. For left-leaning voters who may be unhappy with the Liberals due to broken promises around electoral reform, or the SNC-Lavalin scandal, it appears the Greens are an increasingly viable option, she added.

“With the decline of the NDP, the rise of concern around environmentalism and the availability of what looks like a credible alternative because (the Greens) picked up another seat in Parliament, they're looking good in the polls,” Williams said.

However, because support for the Greens is evenly distributed across Canada, they may struggle to pick up seats in October, Williams added: “I’ve talked to pollsters who think this is just going to go nowhere.”

Still, Williams said, the donation levels tell us that people want the Greens to look like a legitimate option for voters. However, if poll numbers don’t get higher still, people concerned about splitting the left-leaning vote are likely to flock to the Liberals to try to block a Conservative victory, she said.

“Those choices are becoming starker and people are less willing to take a risk on more nuanced candidates or parties.”

Though election day is still several months away, the increased support for the Greens will allow them the chance to vie for seats in areas of where NDP support may be waning, said Thomas.

“If they're pulling in that kind of coin, we're probably going to see a much more intensive national Green campaign, which we haven't necessarily seen.”

Meanwhile, the federal Conservative and Liberal parties both claimed to have set new fundraising records.

Missing from the list of quarterly fundraising totals was the People’s Party of Canada, led by Maxime Bernier.

Elections Canada said the party has filed an initial statement of assets and liabilities, but because the rules are different for new parties, it won’t be required to file quarterly statements until next year.

Even then, the PPC will only have make the filings if they pick up at least two per cent of the votes cast across Canada, or at least five per cent of votes in ridings where it ran a candidate.

Editor's note: This story was updated on July 31 at 6:42 p.m. to include comments from political scientists.

As I read the figures, Greens

As I read the figures, Greens "topped" NDP by $4,000. We are talking about $2.6M give or take in total. Wouldn't a more accurate statement be "Greens and NDP neck and neck"? Or "Greens squeek past NDP by $4.000"?
The rest of the article is talking about the Greens "surging," etc., so your headline fits that story, but it isn't accurate. (IMHO!)

I wonder if, resuming your

I wonder if, resuming your analysis is mostly accurate, that the GPC will draw environmentally conscious conservatives ads the greens fiscal policies are centre right. Will the same rational appeal to Dippers who lean more left environmentally but slightly to the right fiscally.
Hmmm... Liberal majority?

I hate quotes of the form,

I hate quotes of the form, "People are saying ..." based on statistical totals or means.
Individual people each say whatever they say. Groupspeak isn't a real thing.
It happens, too, every election, in quotes and commentary of the form, "People asked for a minority ~~ government." No, they didn't. People individually asked for whatever they voted for, individually.
A majority of people voting for X-party (or a minority of people electing candidates for X-party) does not equate to all the people voting for X-party. That's the basis of the argument for actual representation by population, instead of first-past the post.
But it *still* wouldn't mean "the people" all asked for a particular form (minority-majority-coalition). That's just faulty logic.