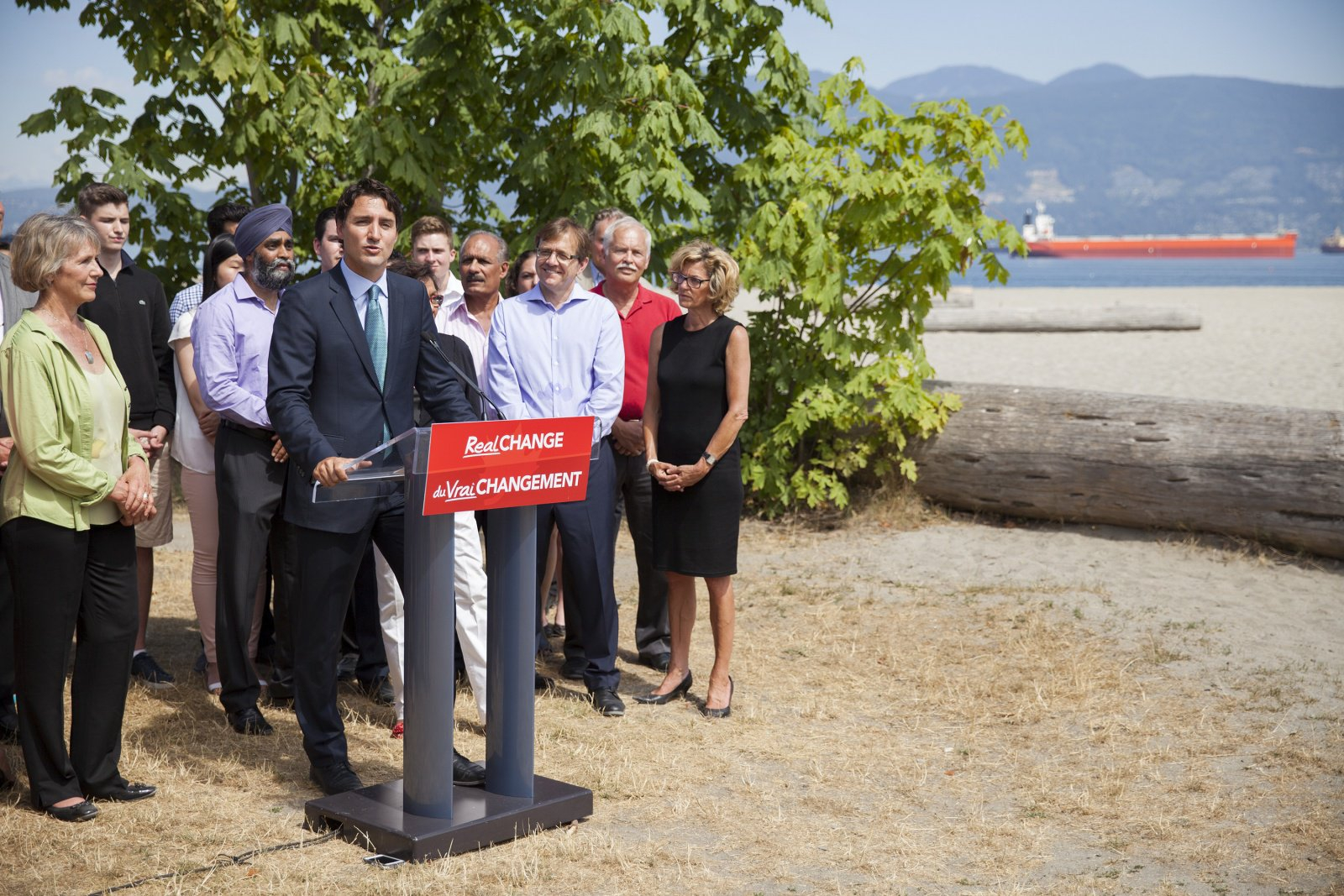 As leader of the Opposition, Justin Trudeau pledged to overhaul pipeline reviews during the Liberal Party's environment and economy platform release in Vancouver in June 2015. Photo by Mychaylo Prystupa.
Previous story
Next story

“Instead of stringing us along and pretending as though they care about it... they have come right out and said they are not going to (do it),” said Caitlin Urquhart, a Newfoundland-based lawyer and organizer of a Facebook campaign to hold the Liberals to their electoral reform promise. “That gives us an opportunity to mobilize.”

The Facebook event was set up just after the fall 2015 election and was scheduled for April 20, 2017 – 18 months after the election, to mark the deadline Trudeau had given his government to introduce a new voting system. Urquhart said the event is now intended to be a national day of protest.

“I think that for a lot of people, it was a catalyst for action, the moment that we can no longer sit on the sidelines and wait and hope,” Urquhart said in an interview.

Electoral reform was one of the reasons people voted for the Liberals in the last election, she said: “They were elected on the idea that a new system – not a specific new system, but a system that is different than the system that we have now – will be selected.”

That's going to stick with voters, she said: “We won’t tolerate this type of cynicism and this type of governance that isn’t responsive to the people.”

But electoral reform is just one of a number of broken promises that will come back to haunt the Liberals in the 2019 election, said Kai Nagata, communications director with the Vancouver-based Dogwood Initiative.

“We saw them setting up a betrayal of that promise over the last number of months,” he said in an interview. “It’s a pattern that we experienced with the Kinder Morgan (pipeline) issue as well, so we’re quite familiar now with the playbook and the tendency of this government to say different things to different audiences.”

Despite widespread opposition from municipalities and indigenous communities on the West Coast, Trudeau approved the Trans Mountain expansion project in November 2016, giving Kinder Morgan the green light to move almost 900,000 barrels of oil per day on an expanded pipeline running from the Alberta oil sands to Burnaby, B.C.

During the 2015 election campaign, he promised to conduct a full review of the Kinder Morgan project, which many in B.C. felt had been approved under a flawed process. A panel appointed by the Trudeau government to review the project concluded in November 2016 that the issue needed further study and consultation, but the project was approved a few weeks later.

Earlier in January, the Trudeau government also backed down on a key promise made to indigenous people: to publish legal opinions related to indigenous and treaty issues. That was one of the recommendations of the Truth and Reconciliation Commission, all of which Trudeau had promised to implement after the 2015 election.

Scrapping electoral reform does have one big advantage for angry voters, Nagata added.

“Single member districts allow you to know exactly who screwed you over the last four years and to hold that person accountable on the ballot,” he told National Observer.

The Vancouver-based campaigner now has two predictions for the next federal election: voter turnout will drop in B.C., and progressive voters who shifted to the centre to shut out Stephen Harper in 2015 will migrate back to the left.

“Voters who are ordinarily not involved in elections, especially young people and First Nations voters, folks across B.C. who cranked up voter turnout — a lot of those folks are not going to come out again because of the cynicism of these decisions and the cumulative wear-and-tear on the government it will create,” he predicted.

“It becomes a metaphor for the person’s reliability on other promises," he told The Canadian Press.

Nathan Cullen, the NDP critic for democratic reform, said he's not planning to let that go. A minority of Canadians are highly engaged on the issue of electoral reform, he said, and a majority likely are less invested in that particular issue – but still care about federal politics.

"They’re the ones whose ears would perk up when they hear the prime minister just lied about something," Cullen said.

— with files from the Canadian Press