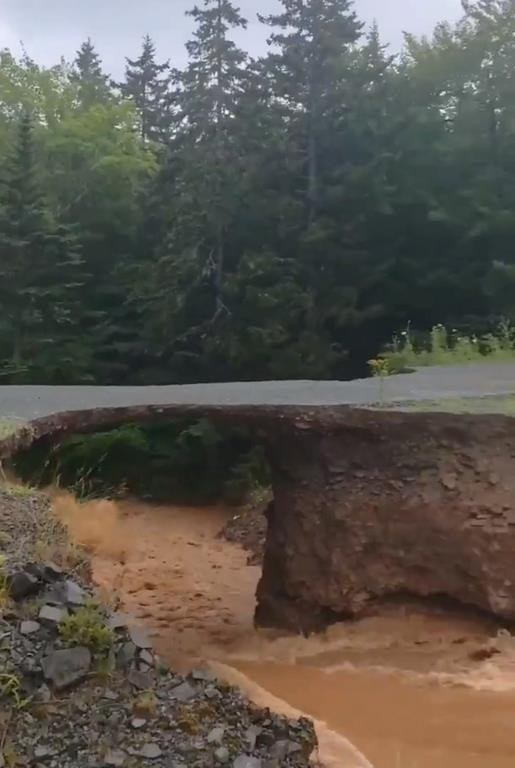 A still frame captured from a viral video shows the collapse of a culvert near Antigonish, N.S. in this handout image. Handout photo -Twitter, @TareqHadhad
Previous story
Next story

When Tareq Hadhad tweeted a video of a gushing stream sweeping away the road to his business, he added a comment about the impact humans are having on the globe.

"It's just the beginning of climate change," he remarked, setting off a social media debate over whether one powerful dump of rain near his Antigonish property should be seen in a wider light.

However, the Syrian refugee who founded the Peace by Chocolate confectionary is also drawing scientific support — particularly on the suggestion this may simply be the beginning of more serious floods.

Environment Canada records indicate the torrent that destabilized the private road to Hadhad's factory came after 66 millimetres of rain fell in under three hours — a once in a hundred years event.

Megan Kirchmeier-Young, a research scientist at Environment Canada, says overall rising temperatures are likely to lead to more of the same, while cautioning it is hard to link a single event to human-created global warming.

"The important thing with climate change is we have high confidence that daily extreme precipitation will increase with warming temperatures," said Kirchmeier-Young, co-author of a chapter in the Canada's Changing Climate Report, published in April.

Her work in the report is a summary of the latest federal research on the coming impact of climate change.

"A warmer atmosphere has more moisture, and so when you have a rain event, it will have more rainfall," she says.

Rick Fleetwood, the director of Atlantic climate services for Environment Canada, says overall records of the past century collected by his service don't show a recent spike in extreme precipitation events.

However, some climate researchers are looking at American data as evidence Canadian precipitation records may be spotty.

Natalia Moudrak, director of climate resilience at the Intact Centre on Climate Adaptation at the University of Waterloo, notes the federal government itself has stated that there's a shortage of observation centres for extreme precipitation amounts.

Ontario's environmental commissioner noted in a 2018 report that "much flooding is caused by small convective storms that may be no more than 10 kilometres across, while weather monitoring stations may be hundreds of kilometres apart."

Meanwhile, in the United States, which has a much denser network of observational stations, a 71 per cent increase in heavy rain events was noted in the country's northeastern region from 1958 to 2012.

"This can be extrapolated further north. The weather patterns don't stop because of the political border," Moudrak said in a telephone interview.

She adds this information should be noted by governments and citizens, and used to prepare adaptation measures in anticipation of further flash floods, sewage system overloading and road damage.

"There is more flooding to come," she said. "There is an urgent need to prepare for this in Atlantic Canada."

The researcher also said she's grateful that the total rainfall in Monday's Antigonish downpour was picked up by the single volunteer monitoring station and forwarded to Environment Canada, as often such localized events aren't recorded in Canada.

The downpours can wreak havoc on communities and the pocketbooks of homeowners who are far from the coast.

Heavy rains in Toronto on July 17 led to flooding of streets and citizens abandoning their vehicles.

In October 2016, portions of Sydney, N.S., were inundated by a sudden dump of over 225 millimetres of rain in a short period of time, damaging homes and flooding the city.

In 2014, Burlington, Ont., residents were shocked after a massive thunderstorm flooded basements through lower lying areas of the community.

A spokeswoman for Nova Scotia's Transportation Department said the rain caused flooding and washouts in various areas of Antigonish, though the collapse shown in Hadhad's video was on a private road.

"Repairs have begun and will continue for the next few days. No roads are impassable," wrote Marla MacInnis, a spokeswoman for the Transport Department.

She said all new provincial highway and building infrastructure is designed to withstand expected climatic conditions.