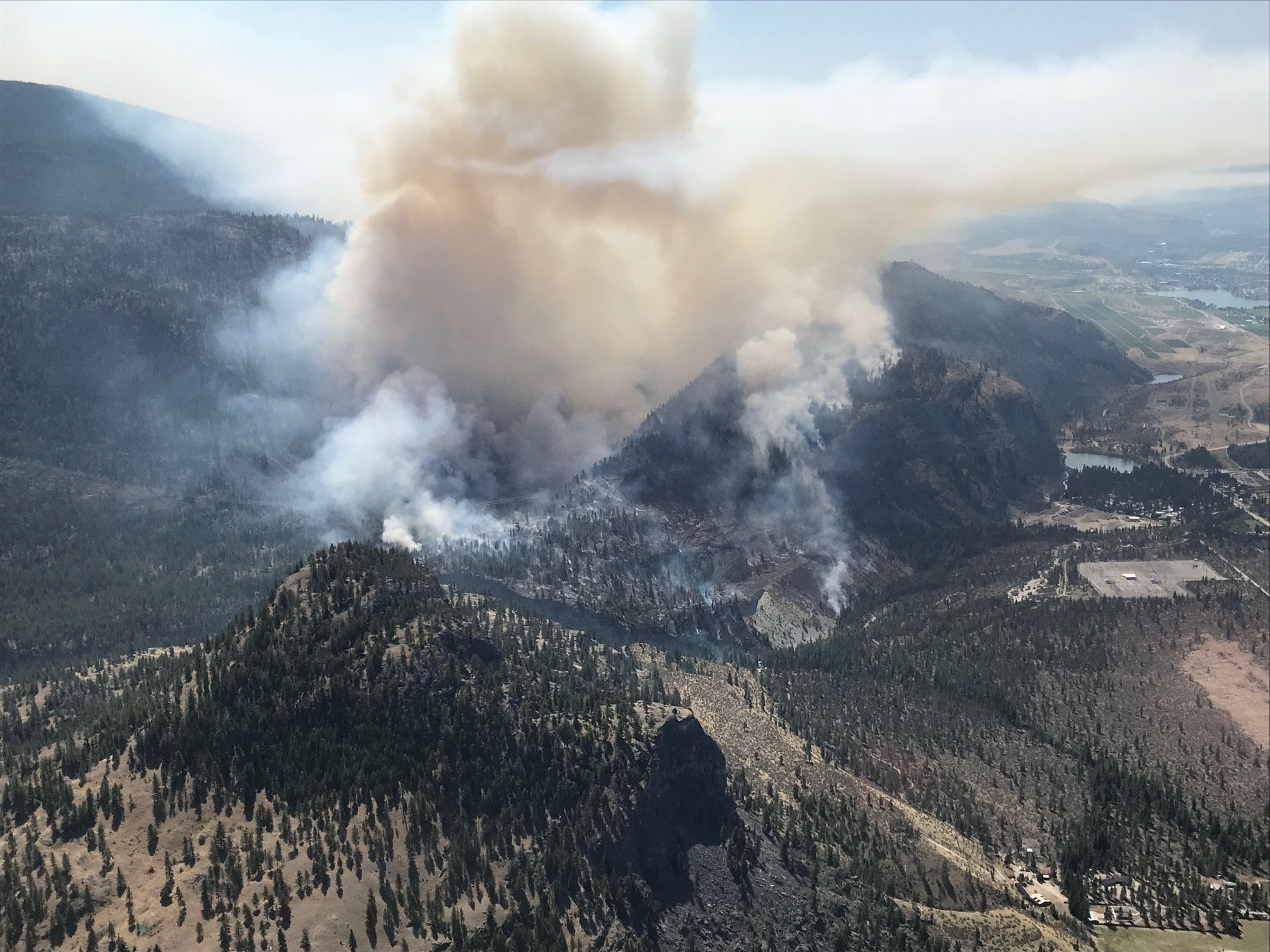 An aerial view of the Eagle Bluff fire, located halfway between Okanagan Falls and Oliver, B.C., on Aug. 5, 2019. Twitter / BC Wildfire Service
Previous story
Next story

And, as Oliver's 5,000 residents reclaimed their waterlogged homes and hid indoors, 2.5 million people in Metro Vancouver saw the North Shore Mountains enveloped in the dense smoke blowing in from wine country.

Earlier this month, a 2,600-hectare wildfire near Oliver fuelled evacuation alerts once more, while the Lower Mainland hoped for continuing blue skies.

As climate change sets the stage for such natural disasters to become unnaturally frequent and severe, it becomes increasingly clear: not only do its health effects transcend geographical boundaries, but it has never been more urgent for all Canadians — rural and urban — to fight it.

The first-ever national survey on the human impacts of climate change, released last week by Greenland, revealed over three-quarters of respondents had personally experienced the effects of global warming in their everyday lives. Human health implications are occurring at only 1 C of global warming since pre-industrial times — underlining the importance of limiting it to no more than 1.5 C. Indeed, several major health-care organizations in Canada issued a unified call to action on climate change this year, echoed by others worldwide.

Sadly, those who contribute the least to carbon emissions are typically most affected by them. More than 80 per cent of Canadians live in cities, where 70 to 80 per cent of greenhouse gases are produced globally. But it is residents of rural and northern communities, and often Indigenous Peoples, whose lives are disproportionately disrupted by flood- and wildfire-driven evacuations, melting permafrost and disappearing ice roads. Within cities, those of low income, young or advanced age and chronic and severe mental illness — less likely to be high carbon emitters — are most vulnerable to heat effects.

As family doctors who have worked in communities across British Columbia and built relationships with our patients at home, we understand how vital meaningful employment is for our health, and a thriving economy for our health-care system. Climate change threatens both. On top of almost $800 million spent managing wildfires and floods in 2018, subsequent economic losses in our timber, farming and tourism industries took a major toll on families and the province. As former Bank of Canada governor Mark Carney recently said, “the enormous human and financial costs of climate change are having a devastating effect on our collective well-being.”

So, how do B.C.’s efforts to reduce greenhouse gas emissions stack up? Though aspects of the provincial government’s CleanBC Plan deserve praise, its support for the construction of a $40-billion liquefied natural gas plant in Kitimat, propped up by massive subsidies for the LNG industry, is untenable. Scientists say we must slash global carbon emissions in half over the next decade or risk catastrophic climate change — and large-scale LNG investments will make it near impossible for us to do so. Federally, the government’s purchase and recent approval of the Trans Mountain pipeline expansion that will run bitumen from rural oil country directly to our urban beaches is another huge step away from staying within our carbon budget.

"To those who say that taking action on the climate is for radical environmentalists and urban elites, remember that fierce care for the wellbeing of our loved ones is universal."

A Canadian antidote to global warming, on the other hand, must take effect at many levels. This includes a strong price on carbon. Expansion of the fossil fuel industry, which together with the transportation sector releases more than half of our carbon emissions, must stop as our valuable oil and gas workers retrain for a rapid transition to renewable energy.

To our fellow health-care providers: by decarbonizing the Canadian health-care system, where emissions are steadily rising in the face of substantial targeted reductions in similar countries, we can serve as a model for wider systemic change — and breathe cleaner, healthier air. Families and individuals can choose active transport, plant-rich diets and less participation in consumer culture. This October, we must all do our research and vote for federal-election candidates who are serious about combating climate change.

Finally, to those who say taking action on the climate is for radical environmentalists and urban elites, remember: fierce care for the well-being of our loved ones is universal. Make no mistake: climate change is the greatest threat to human health of the 21st century — and we are all needed in the battle against it, for the safety of our families, homes and communities.

Dr. Melissa Lem is a Vancouver family physician and board member of the Canadian Association of Physicians for the Environment.

Dr. Alan Ruddiman is a rural generalist physician in Oliver, B.C., and was the president of Doctors of BC from 2016-17.

Rather than the potential

Rather than the potential public perception of this information coming from the member of an organization with a name that some might perceive as biased "tree-huggers", it needs to me stated that the Canadian Medical Ass., World Health Org and Canadian Public Health Ass have all named Climate Change The Greatest Threat to Public Health of the 21st Century.

It would be an enormous help

It would be an enormous help if Professional Engineers and Geoscientists decline work on new fossil-fuel infrastructure. They should then wind down their support of existing infrastructure. I challenge them to do so.