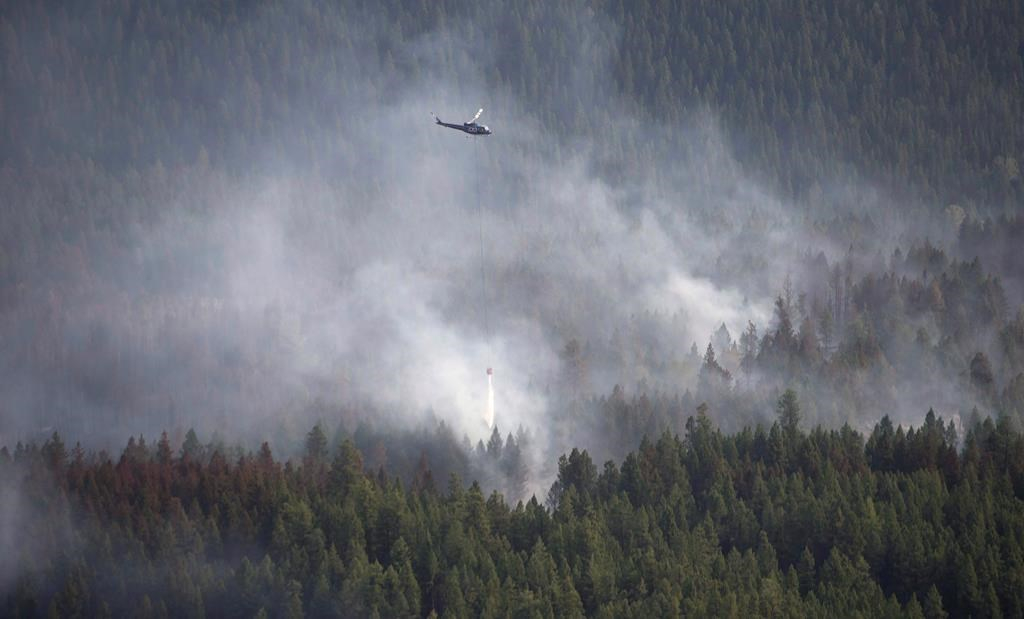 A helicopter dumps a load of water on the Philpot Road fire outside of Kelowna, B.C., on Monday, August 28, 2017. File photo by The Canadian Press/Jonathan Hayward
Previous story
Next story

The shift, which may have already happened, could force firefighters to change how they battle northern blazes, said Merritt Turetsky, an ecologist at the University of Guelph and co-author of a paper that appeared in the science journal Nature on Wednesday.

"It's making it much more difficult for us to target those reductions in human emissions because, all of a sudden, we have all these unaccounted-for sources."

The boreal forest, a band of green that stretches over six provinces and two territories, has long been a storehouse of carbon.

Although fires sweep through as often as every 70 years, much carbon remains in the soil and slowly builds up — up to 75 kilograms of carbon per cubic metre, some of it thousands of years old.

But with climate change, fires are becoming more frequent, larger and more intense.

Researchers from five U.S. and four Canadian universities wanted to see if that was affecting stored carbon. They looked at the impact of the 2014 fire season in the Northwest Territories, which burned the largest area on record.

"These were large and severe fires," said Xanthe Walker of Northern Arizona University. "We thought this is when and where (stored carbon) would burn."

The team found that even after the fires, older forests continued to preserve carbon where it was protected by a thick layer of organic soil.

But the old carbon burned in nearly half of the younger stands where the soil wasn't as thick. And what didn't burn rapidly decomposed into the atmosphere.

"There are areas where there's no organic soil left and it's just exposed mineral soil," Walker said.

Turetsky said the boreal forest is gradually becoming younger as fires increase in size and frequency.

"Now those old forests are young forests, so when the next forest fire hits that area, those are going to be systems that are vulnerable to legacy carbon release.

"We can have thousands of years of productivity stored and then released in a matter of minutes."

At some point, fires will release more carbon from the boreal forest than it's able to store.

This summer has been an unprecedented fire season across the circumpolar North. There have been more than 100 major fires burning north of the Arctic Circle and in boreal forests in places such as Siberia.

"That soil structure is all the same," Walker said. "Presumably, they all have legacy carbon."

The amount of old carbon released is still small, especially relative to that released by fossil fuels. But it complicates the task of bringing overall carbon emissions under control. It could also complicate how forest managers approach fires.

Wildfires in remote areas are often simply left to burn. Turetsky said firefighters may have to rethink that to protect stands that store a lot of carbon.

"The Canadian Forest Service is starting to think about old carbon as a valuable resource."

The role of Canada's huge forested areas is beginning to change, she said.

"Our forests are no longer carbon sinks."