Pressure is building on the federal government to decide the fate of a parcel of land east of Toronto long earmarked for an airport that critics say is unnecessary.

The plan for an airport on rural land north of Pickering was first hatched more than four decades ago, when Pierre Trudeau’s government expropriated 18,600 acres of farmland, including two villages, to create a site to supplement Pearson on the city’s western flank.

It hit various snags over the years, and almost half of the land has since been given over to the Rouge National Urban Park, but some 9,600 acres of mostly prime farmland remain in the possession of Transport Canada.

In the intervening years, scientific consensus has developed around the need to drastically reduce greenhouse gas emissions (such as those emitted by aviation) to avoid the effects of a warming planet, including crop failures, droughts and floods. Food security has become an important consideration, since produce grown elsewhere could, as a result, fluctuate wildly in price or even become unavailable.

That's why Land Over Landings, a volunteer group that opposes an airport, says the site should instead be used as an urban farming and agri-tourism destination.

“There’s so much fear about what is happening environmentally,” said Sandra Campbell, a longtime supporter and adviser to Land Over Landings and a founder of Abundance GTA, which celebrates urban farming. “The people that flock to farmers markets are there because of a sense that it is one thing they can do.” 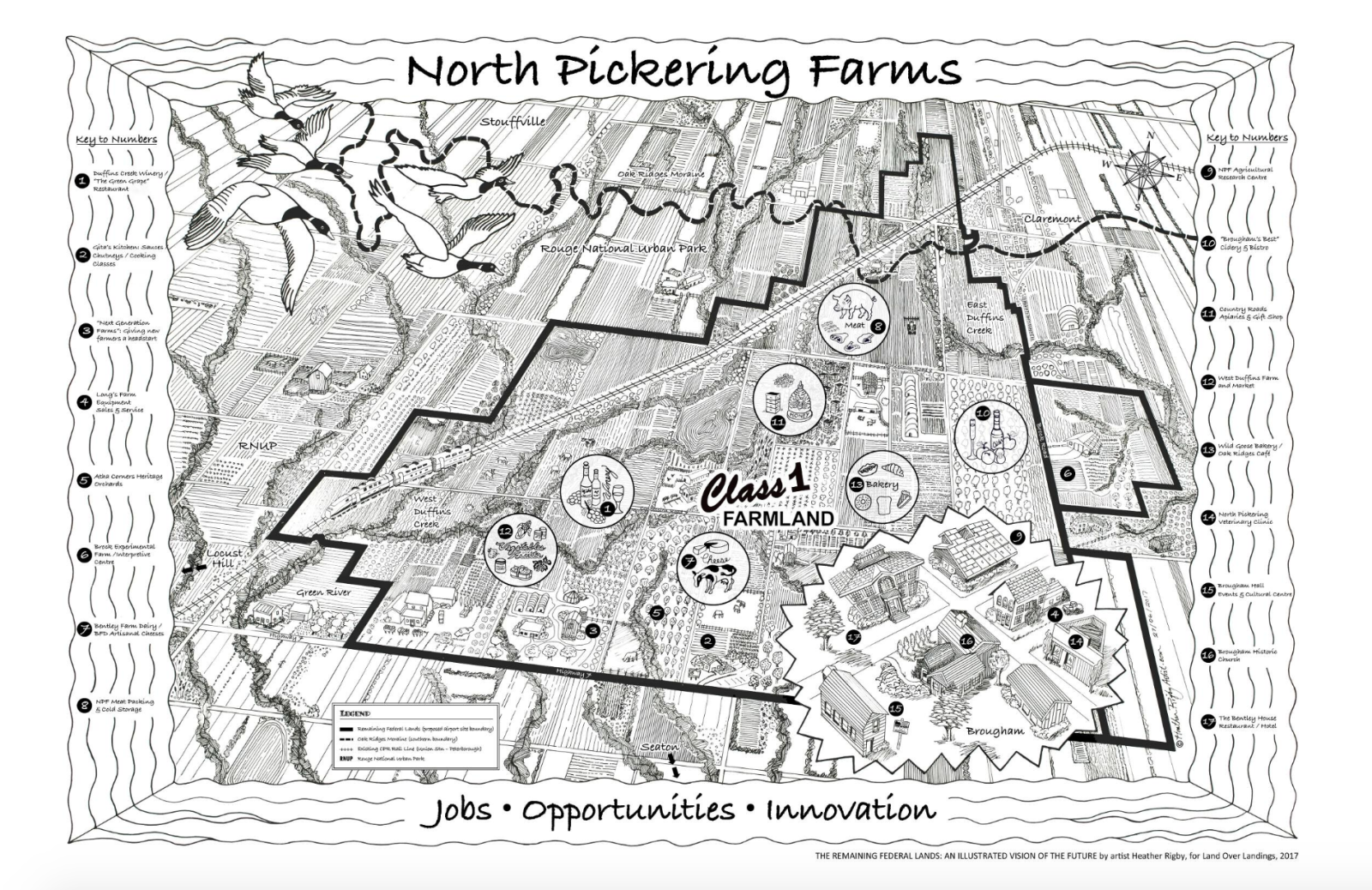 An illustration of how the remaining federal lands could be used, created for Land Over Landings by Heather Rigby.

But others, including a new crop of local representatives elected late last year, would prefer to see the prime farmland near Canada's biggest city turned to more typical economic development, testing the commitment of Pierre's son, Prime Minister Justin Trudeau, to balance the environment and the economy.

Trudeau and his transport minister, Marc Garneau, could technically scrap the airport plan and endorse the urban-farming alternative before an election due in October, but it would be an aggressive bet that choosing food over flying is an electoral-vote winner.

"No government has had the intestinal fortitude, courage, vision and wisdom to create something truly wonderful that would be the envy of the world."

“No government has had the intestinal fortitude, courage, vision and wisdom to create something truly wonderful that would be the envy of the world,” Land Over Landings chairwoman Mary Delaney said. 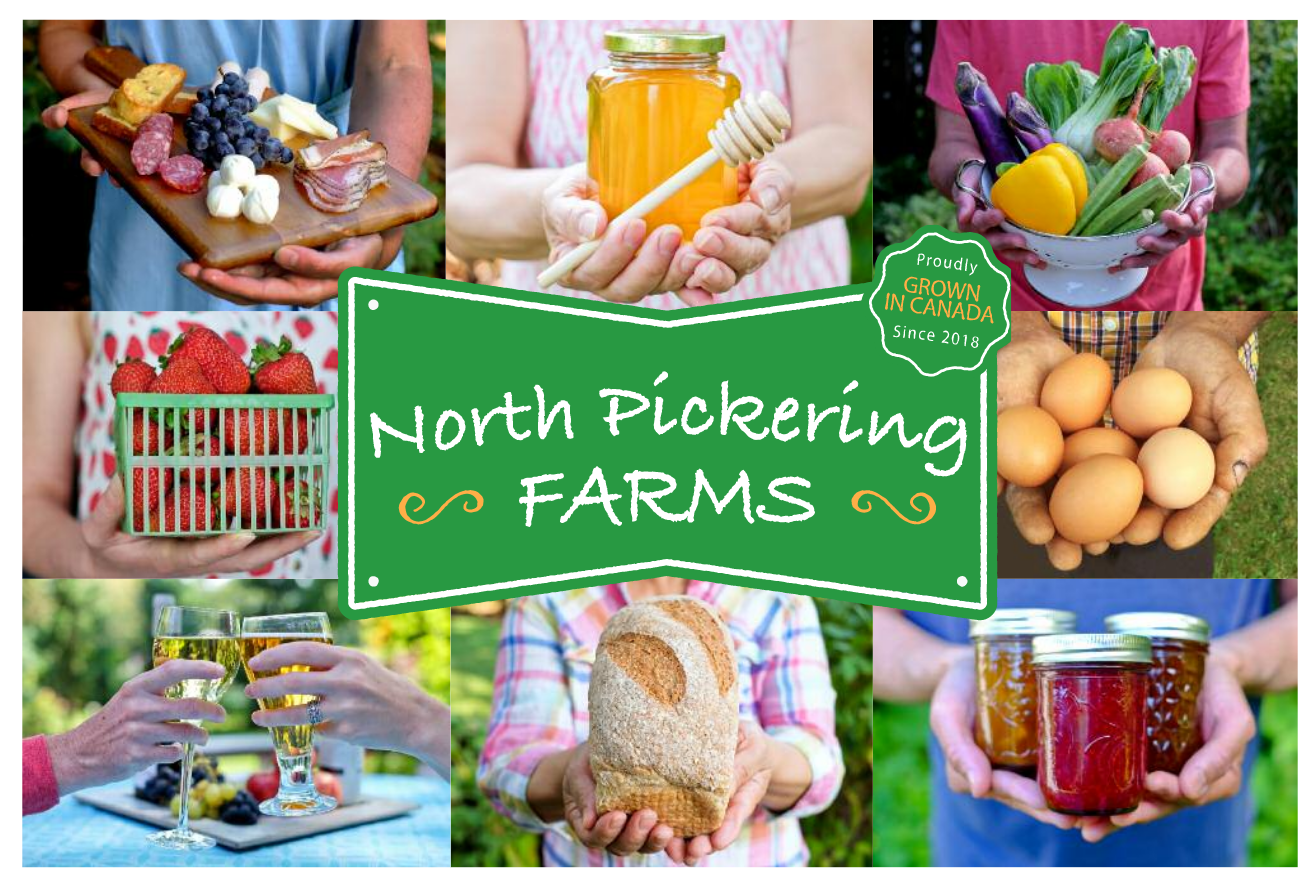 In any case, the result of the federal election might further shift the political landscape, following municipal votes last October which brought in several representatives supportive of an airport or other development, including Dave Ryan as Pickering mayor, Shaun Collier as Ajax mayor and John Henry as Oshawa regional chairman.

“My fear is that if (federal Conservative Leader Andrew) Scheer is elected, he and Doug Ford will go in cahoots on a deal to free up the land for development,” Campbell said.

One such potential development is Durham Live, a massive new entertainment complex planned by the Apostolopoulos family of developers.

Ford’s government is already pushing in that direction.

In May, Peter Bethlenfalvy, the Progressive Conservative MPP for nearby Pickering-Uxbridge, wrote to Garneau to ask him to either release a long-awaited report on the viability of an airport prepared by consulting firm KPMG or return the lands to the people of the region.

He said the letter was sent with the full support of all PC MPPs in the Durham region as well as the City of Pickering and the Town of Uxbridge.

Meanwhile, the federal member elected in 2015 for the same riding, Liberal MP Jennifer O’Connell, has long opposed the project and recently said she thinks the government has not been convinced of the business case for the airport.

In response to questions from National Observer, Bethlenfalvy's office said the fact that land has sat idle since the 1970s, without a clear federal policy, has stalled economic development and created an "injustice" to the people of the region that "needs to be corrected as a matter of priority."

"While these lands are key to unlocking more economic potential for Durham Region, no development has taken place since expropriation," spokesman Hayden Kenez said. "Without a decision from the federal government concerning the fate of the land, agriculture cannot benefit from long-term planning, residences are not being considered and business cannot flourish."

The current Trudeau government says it’s studying the KPMG report it commissioned in 2016 and whose third and final report it received earlier this year.

Asked whether Garneau would make a decision before the October election, his spokeswoman said the file merited wide consultation and that the department expected to complete its policy analysis and provide its advice by fall 2019.

The three-part KPMG report considered whether southern Ontario risks a shortfall in aviation capacity in the next 20 years, how various airport options might fit into the broader regional aviation system, and the revenue-generating potential and economic effects of these options.

“Any future decision on the development of the Pickering Lands will be made based on a sound business case and updated data on aviation demand and capacity,” Garneau’s spokeswoman, Delphine Denis, said in an email.

Denis said the KPMG report is key to the department’s advice, but wouldn’t say what’s in it.

“As the report contains commercially sensitive information on the Canadian aviation industry, we are unable to share the findings publicly at this time,” she said.

Liberal-turned-Independent MP for nearby Markham-Stouffville Jane Philpott added to the expressed opposition to an airport when she wrote in mid-July that it would be better to develop other transport options and protect valuable farmland.

“As we await this report, I am prepared to confirm that I do not support moving ahead with an airport because of the need to protect our environment and some of the finest agricultural land in the country,” Philpott wrote in a blog post.

She pointed out that there is no good evidence of a sound business case for the airport, with the 2017-2037 Master Plan for Pearson Airport indicating it will have enough capacity to meet the growing demand for air travel over the next two decades.

“Building another large airport is inconsistent with the crucial transition of our nation to a low-carbon economy,” she wrote. “Investing in more environmentally friendly infrastructure like high-frequency passenger rail makes more sense than spending billions of public dollars on an airport.”

Shouldn't Jane actually wait to see the report? She doesn't have to agree with it, but she should read it. And what happens after 20 years a rather short timeframe as these things go.

The next 20 years is likely

The next 20 years is likely to see a major revolution in the entire framework of economic activity, from GNP to GNW (Gross National Wellbeing.) This is not utopian - it is plain common sense. Humanity is heading for a Head-Smashed-in Cliff and world wide crises tend to have a winnowing and sharpening effect on human evolution. The winnowing is more than likely and after the worst is over, we will have a very different notion of what is critical to our survival. In the meantime, the next 20 years should not be more of the same old - same old. It is more than time for all of us to start deciding what is real and what is important - like access to clean water and to locally produced food. How do we know that the existing global transport and economic systems won't collapse and require a different strategy? It is very likely that much of what we have hardened with concrete will be sprouting weeds in the foreseeable future.

The scientific literature certainly supports your concern. If we as a species wants to have a long future for its future generations it is almost past time to bring our numbers and impact on the Biosphere to neutral and better. Science and Technology have made it possible to know what we are doing and why to overwhelm the life allowing components of this finite planet Earth. We are well along to achieving that, hopefully not intended, outcome. If we as a species can put our collective mind to achieving a sustainable life support system we can do it. It will be an effort, never before occurring on this planet, casualties will be high but survivors there can be. They will have learned that Nature's Laws are binding, ignore them invites extinction. We have already put a million or so innocent other species on the way to early extinction. We are following, by our own hand. We are now God and the Devil, which will we manifest??

I agree with you Betsy.

I agree with you Betsy.