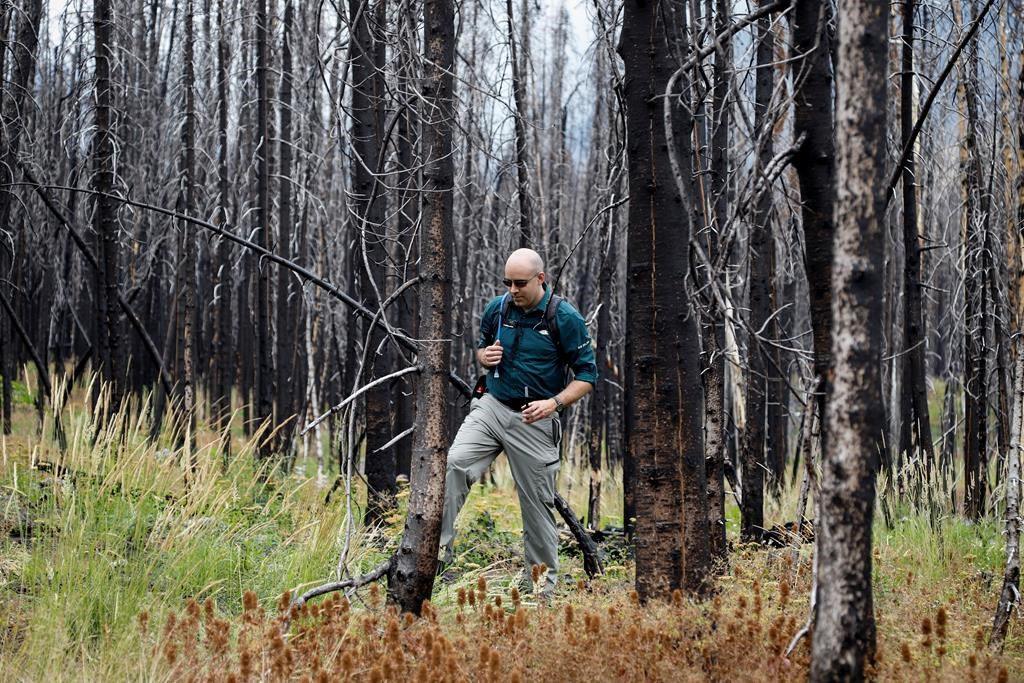 Trees are charcoal black on one side and bone white on the other, evidence of the path a wildfire took as it tore into Waterton Lakes National Park in southwestern Alberta nearly two years ago.

"I think it's spectacular and beautiful," park superintendent Sal Rasheed says of the transformed landscape.

"It's a once-in-a-lifetime opportunity to see the consequences of a natural disturbance event that you would otherwise never see again."

The wildfire, sparked by a lightning strike in British Columbia, forced everyone out of Waterton on Sept. 8, 2017. Flames breached the park's boundaries three days later.

Firefighters managed to save the townsite and the historic Prince of Wales hotel, but Parks Canada lost several buildings and the scars of the fire are evident on the blackened mountain slopes.

She says the park has become a "living laboratory" for researchers studying how a powerful wildfire transforms an ecosystem as climate change makes such events more frequent and severe.

"The Kenow wildfire was of exceptional intensity," she says. "Understanding what's happening here might be key to understanding what happens in the other post-fire landscapes in the future."

Already, researchers have encountered some surprises.

Wood-boring beetles which have shown up after past wildfires in the area haven't in Waterton. Neither have woodpeckers that feed on those bugs.

Researchers are keeping an eye out for any unusual algae blooms caused by higher-than-expected nutrient levels in water.

Pearson says scientists will also be watching to see whether the forest regenerates into its earlier state, or into grassland or another type of ecosystem, since the climate is warmer and drier now than it was when the trees first took root.

Parks Canada is wary of invasive species taking advantage of bare ground exposed by the fire, so hiking trails are equipped with boot-brushing stations to prevent visitors from spreading seeds.

Locals have had mixed feelings about the changed landscape.

Deb Watson, whose family-run trail riding outfit Alpine Stables burned to the ground, says she cries every time she looks at the scorched forest on Crandell Mountain because she knows she'll never see it green again.

"I don't like to ride into the back country," she says. "I don't want to see it. It just breaks my heart."

Hotel and restaurant owner Lockey Craig, who lives just outside the park, says it won't be the same in his lifetime either.

But he's noticed the views from some of the hiking trails are better now that trees aren't in the way.

"Just because it's different doesn't mean it's worse."

Jordan Wammes — whose family has a bike rental, gas station and treat shop in town — said things were stark during the summer of 2018, but this year was better.

"It was our best wildflower season that I've ever seen down here."

'Nothing made it:' Ranch that offered trail rides gutted by Waterton wildfire