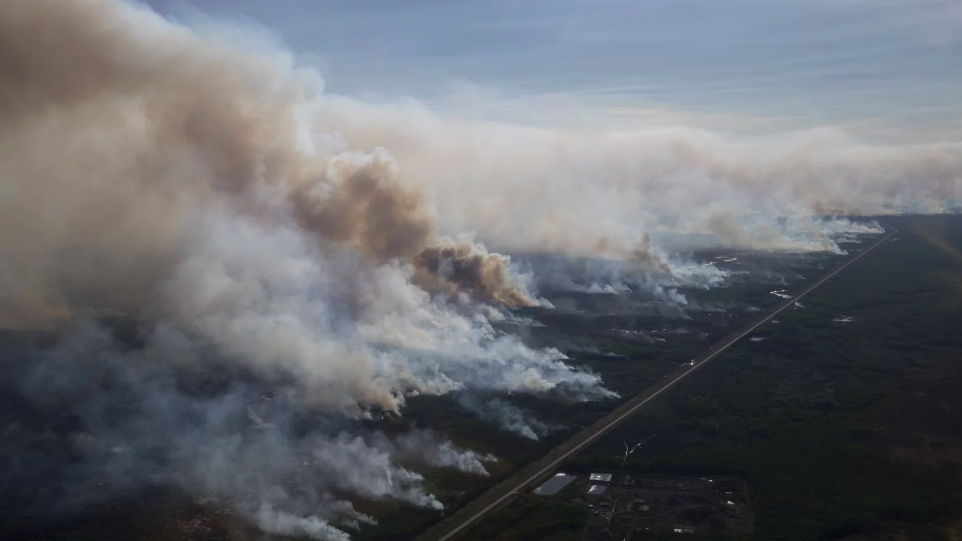 The Chuckegg Creek wildfire near High Level, Alta., on May 25. Government of Alberta Photo by Chris Schwarz
Previous story
Next story

British Columbia brands itself “Super, Natural” for its size and stunning beauty, but the climate crisis is ravaging its storied forests. When the federal government announced in late May that the outbreak of wildfires throughout the country had already tripled its 20-year average, British Columbians took notice.

Then, we did a double-take when the Arctic began burning this summer at unprecedented rates. We’d barely recovered from last summer’s record-setting firestorms in our province.

Scientists have linked the increasing number and ferocity of these fires to global heating, but you’d never know that if you depended on Canada’s corporate media.

In an open letter to his country’s news media, journalism professor Sean Holman at Mount Royal University recently released a study about coverage of last summer’s fires. He found that only 7.7 per cent noted the “demonstrable connection” between the wildfires and the crisis.

It’s not difficult to explain the relationship between the crisis and towering blazes: temperatures in Canada are increasing twice as fast as the global average, drying out its forests by sucking moisture from trees and soil — “tinderizing” our wild lands for catastrophic fires.

The climate emergency affects virtually every journalistic beat, especially violent crime. This staple of television news coverage — “if it bleeds, it leads” — increases as temperatures rise, according to a number of studies, including one published by the Journal of Environmental Economics and Management, which estimates the climate emergency will cause an additional 22,000 murders, 180,000 rape cases and 1.2 million aggravated assaults by the end of the century in the U.S. alone.

Terrorism will also increase. According to Studies in Conflict & Terrorism, a temperature increase of more than 2 C will lead to a 14 per cent jump in attacks, while fatalities will disproportionately rise by 24 per cent.

Business reporting could also improve if it were refracted through the prism of global heating. After all, the collapse of the world economy would be the biggest economic story in history. The governor of the Bank of England, Canadian Mark Carney, has repeatedly warned that leaving most fossil fuel reserves in the ground to avoid a climate catastrophe could “strand” trillions of dollars worth of assets.

Canada is particularly vulnerable because the cost of mining bitumen for oil from Alberta’s tarsands is much higher than drilling in countries with easily accessible petroleum reserves.

Nevertheless, Prime Minister Justin Trudeau’s decision to pony up $4.5 billion of public funds to buy and expand the Trans Mountain Pipeline will risk spills on both land and sea to pump the tarsands of Alberta to the B.C. coast for shipment to Asia. This came one day after Trudeau’s government — irony alert — declared a “climate emergency.”

Death rates from respiratory diseases — another huge story — are sparked by higher temperatures.

The emergency’s effect on mental health is also emerging. In Sweden, where the term klimatångest — “climate angst” — was coined, upward of 150 Swedish psychologists and psychiatrists recently published an open letter to their government decrying the effects of climate change, especially on the mental health of children.

For Indigenous communities and others living in Canada’s wildfire country, the physical and mental-health effects can be devastating. When the Northwest Territories was smothered with smoke in 2014, hospitals saw a 42 per cent increase in visits for respiratory ailments. The Canadian Journal of Public Health reported that many residents also suffered stress, fear and uncertainty.

What is clear is that if Canada’s major media continue to deny the climate emergency by relegating critical coverage to their back pages — when they bother to report the crisis at all — anger and angst will only increase.

There will be no ignoring the climate crisis in the newsroom, then.

Mark Nykanen, a member of Extinction Rebellion Vancouver Island, is a four-time national Emmy Award-winning investigative reporter and author whose past three novels have focused on the climate emergency.

I am uncomfortable with this

I am uncomfortable with this article, but not sure why. There are few facts given so it seems rather like 'crying wolf', though I'm not denying the article's truth. Accepting the climate crisis, surely we need more coverage of the changes we must make and, hopefully, of changes that have begun. Countries with high per capital energy use, such as Canada, must change our transportation, habitation, food, and economy in ways that will seem extreme. Surely there are examples of leadership in the world that need to be reported.

What I'm confused by is your

What I'm confused by is your comment Brian. Since you aren't denying "the articles truth' (a good sign), how does it become like 'crying wolf' for you??? Surely that doesn't apply when there is in fact, a wolf at the door?

As long as our media...and careful souls like yourself, want to downplay the reality of our situation.....in favour of 'positive' stories about pockets of positive change, I suspect climate denialists will be happy.

Every day we witness scenes of utter devastation to parts of the planet...the Bahamas are the victims du jour....but the role of climate change goes, for the most part, unmentioned. Instead, we rhapsodize over people's 'resilience' and their sudden willingness to help each other. Similarly, when there's a violent incident (something this article tells us that studies show will increase as the planet warms) we go ga ga...with monotonous regularity, over people's 'coming together'....using " ______________Strong" crapola, to disguise the repetitive trauma communities increasingly face in a warming world of diminishing opportunities.

These are examples of our media staying positive...and silent over the rising tide of climate effects. Telling the victims how 'special' they are while making no mention of the grim reality, which suggests that rebuilding in coastal areas is a case of throwing good money after bad. Our species has survived this far through our ability to learn, and apply what we learn. MSM seems intent on dulling that ability with its monotonous mantras, designed to keep us all asleep in our current bad habits.

My concern is that an endless

My concern is that an endless supply of articles pointing at the existence of a problem - a crisis - is crying wolf unless the same articles also highlight changes needed, or better yet, examples of behavior change that have already started and can be copied.

I believe we need to make very substantial changes, in housing and transportation, for example. Our energy consumption (all forms) is way too high. Denser housing, community heating and cooling schemes, location of housing closer to work, shopping, and play, and so on. Are there not urban villages designed to be energy efficient? In transportation, using the same vehicle design for the daily tasks in the home environment (low speed, short distance) and inter-city travel (highway, dense traffic) makes little sense, but I read nothing about better alternatives.

Brian, your comment makes me uncomfortable. I think this is because I focus on "examples of leadership in the world that need to be reported" in the transportation sector, in my writing in the National Observer - eg. https://www.nationalobserver.com/2019/03/25/features/climate-emergency-d.... Others write on shining examples in other sectors. Do you comment on these articles and comment on how we need to see more like them? I really like Mark's article - we need the climate emergency alarm bells ringing even if the sound makes us uncomfortable.

Eric, thank you for pointing

Eric, thank you for pointing out your article. I had not read it, but am pleased it exists. I suspect the future living area will be more village-like and will have no highway-capable vehicles where people live. Your examples show the way.

The media have provided good

The media have provided good coverage of the necessity to react to the climate emergency but almost no coverage at all of Canada's failure to deal with the emergency. With the possible exception of Saudi Arabia Canada produces the most GHG's per capita even though that could readily be avoided in this country, especially considering our abundant hydro power capacity.

Canada is a cold country so it uses a lot of fossil fuels for heating, most particularly natural gas. While natural gas produces comparatively little CO2 when it is burned a great deal of methane is released into the atmosphere (and often not measured) in the production and distribution processes. We should not be using any natural gas or fossil fuels for heating. We have warm summers so it makes more sense to collect and store that summer heat for use in the winter.

Storage systems can operate without using any grid power for either heating and cooling, potentially reducing the peak power demands from 147,000MW to potentially as little as 22,000MW. Reducing the generating capacity would save hundreds of billions of dollars and put our grid supply requirement to a value that is less than our current hydro production.

Thermal storage systems would also automatically create a network of fast-charge stations for electric vehicles, making it possible for such cars and trucks to "fuel up" with the same convenience as gas stations, and utilizing cheap electricity that is the result of the foregoing. Overall, nearly all of Canada's sources of GHG would disappear as a result of the single decision to use stored thermal energy.

This is what the media, the public and our politicians should be talking about - but they aren't.

Where does “fact checking”

Where does “fact checking” figure in this? This article is not objective journalism, but verges on hysteria. “Climate angst”, for example, may also be climate hysteria. Psychiatrists are not scientists. Policies are moving toward sustainable energy and away from fossil fuels (for some facts, check out http://www.fsds-sfdd.ca/index.html#/en/detail/all/ ) Articles like this imply that we should stop all uses of fossil fuels tomorrow. Missing is an understanding of the socio-economic consequences of such a choice: mass unemployment and resulting unrest, violence, and chaos -- the opposite of reasoned change.

This is not 'objective

This is not 'objective journalism', nor do I believe it was ever intended to be. It is, rather, an opinion piece taken from another source. It uses two other 'opinion pieces' which report (speculate on) some previously undiscussed consequences of climate change; increase in violent crime and increase in terrorism. Perhaps, when these consequences become newsworthy, the main stream press will pay more attention to climate change.
Government action on climate change will be taken when the voters demand it and they will only demand it when they are fully informed. That, supposedly, is the function of the press. The link you provided is to a list of "Goals" and it is wishy-washy in the extreme. I seem to remember that the Liberal platform at the time of the last election was to cease federal subsidies to the oil and gas industry. That nobel intent has been watered down to this: taken from the link you provided.
"In support of our greenhouse gas emission reduction target, we will continue to review measures that could be considered inefficient related to fossil fuel subsidies, with a view to reforming them as necessary."

I believe the fact is that,

I believe the fact is that, globally, the amount of fossil fuels burned each year is increasing.

I suspect that what is true globally is also true for Canada.

If these facts don't concern you, probably nothing will.