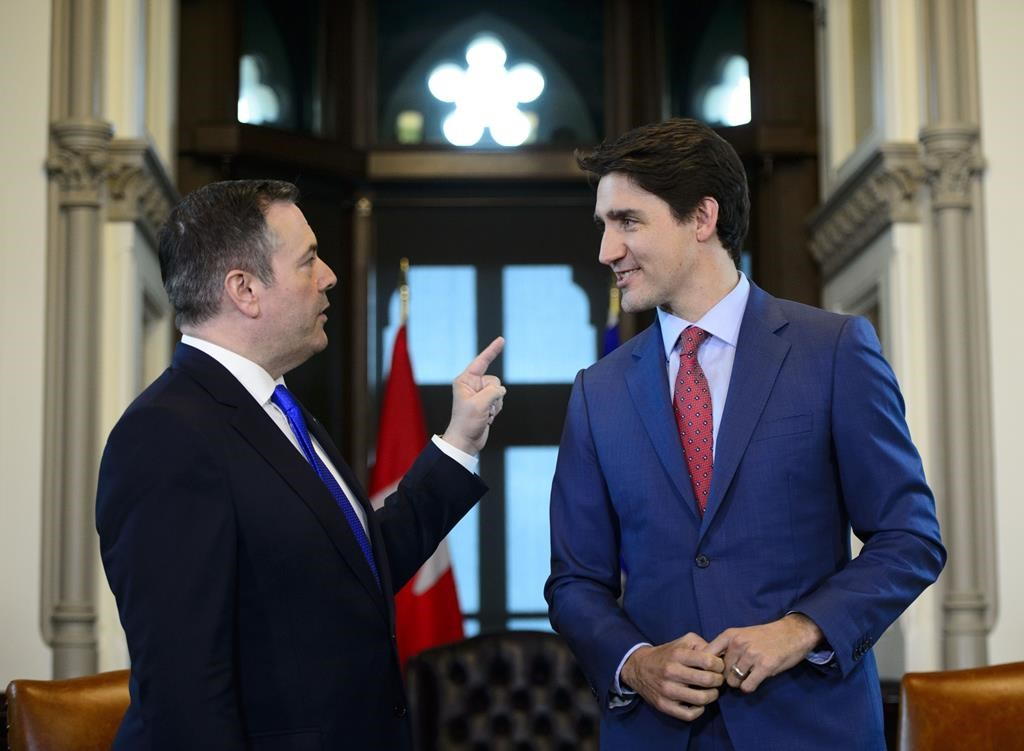 Prime Minister Justin Trudeau meets with Alberta Premier Jason Kenney in his office on Parliament Hill in Ottawa on May 2, 2019. File photo by The Canadian Press/Sean Kilpatrick
Previous story

Jason Kenney, who is just back from a tour urging investment in Alberta's energy sector, calls the prime minister's past behaviour embarrassing and unacceptable.

"I found the revelations about the prime minister's penchant for blackface frankly bizarre. He is trying to blame this on society, that we must learn from this. No, prime minister this is about you, not us," Kenney said Monday.

"I'm 51 years old. I've hardly lived a sheltered existence and I've never seen anybody, ever do that — insulting, racial mockery."

He has said he had a blind spot because of his privilege growing up in a well-known family and now recognizes the photos were racist.

When asked for a response to Kenney's comments about the makeup incidents, the Liberal party emailed a lengthy transcript of Trudeau's answers to questions about the incidents during a media availability last week.

"This is something that I deeply, deeply regret. Darkening your face, regardless of the context or the circumstances, is always unacceptable because of the racist history of blackface. I should have understood that then and I never should have done it," the transcript said Trudeau told reporters Thursday in Winnipeg.

Kenney on Monday pumped up his friend, Conservative Leader Andrew Scheer, who Kenney says grew up in a family that didn't own a car and lived in a modest townhouse.

"I very much hope that Canadians will opt for a prime minister that is in touch with the lives of ordinary people, who is dignified, who is focused on the cost of living, and who doesn't have to apologize for these types of embarrassing incidents in the future."

Kenney has had a long history of locking horns with Trudeau going back to the time when Kenney was the federal minister of citizenship and immigration and Trudeau was the Liberal critic on the file.

Kenney has previously referred to Trudeau as an "empty trust-fund millionaire who has the political depth of a finger bowl" and "one of the worst prime ministers for Alberta in our history."

Kenney said Trudeau's name was on the lips of many international investors on the premier's recent trip to the United States.

"What I heard in New York from some of the world's largest investors is the re-election of a Trudeau government would likely continue the freeze on investment in the Canadian energy sector in particular," he said.

"These are very sophisticated folks who invest tens of billions of dollars and they are not, as I heard, prepared to risk additional investment with a federal government that seems openly hostile to the energy sector."

Kenney said if that happens Alberta will have to find other ways to persuade investors to return to the province.

The Liberals responded that Canada's economy was struggling in 2015 after a decade of austerity and cuts under former prime minister Stephen Harper.

"After ten years of failed policy under the Conservatives, we are building a pipeline that gets Albertans working and our resources to market," the email from the party stated, referring to the expansion of the Trans Mountain pipeline which the Liberal government purchased for $4.5 billion.