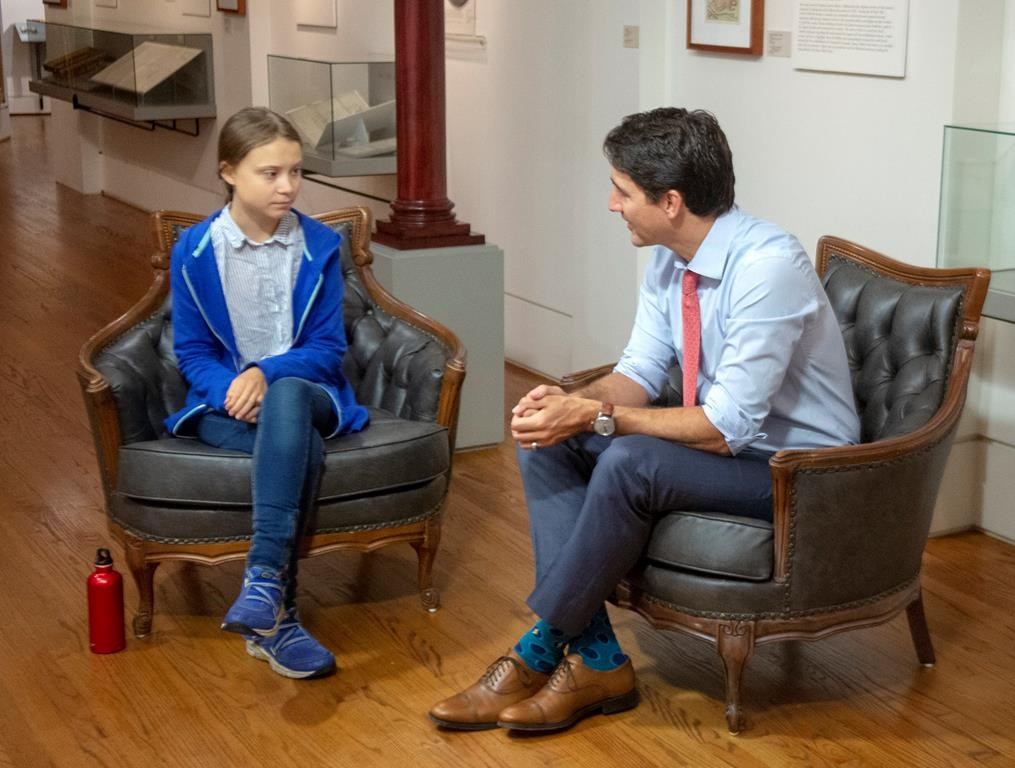 "I try not to focus so much on individuals," she said.

"He's, of course, obviously not doing enough ... this is such a huge problem, this is a system that is wrong. So my message to all the politicians is the same: to just listen to the science and act on the science."

The meeting with the 16-year-old girl came with great political risk for Trudeau. Thunberg, who has galvanized the world's young people to demand action on climate change, has demonstrated confidence in speaking truth to power with her defiant condemnation of world leaders at the United Nations this past week for their inaction on fighting climate change.

Thunberg is in Montreal where Trudeau and Green Leader Elizabeth May are joining what is expected to be the largest of a series of marches taking place across Canada. Most of the federal party leaders are joining marchers, who are demanding cuts to greenhouse-gas emissions.

One exception is Conservative Leader Andrew Scheer, who's spending the day in the suburbs of Vancouver for an announcement and campaign stops with candidates in Maple Ridge and Richmond, but not marching anywhere. Scheer has said other Conservatives will be joining marchers.

Trudeau has aligned himself with Thunberg on the campaign trail, praising the activism of young people and positioning the environment as a key issue. He has made a series of announcements this week aimed at reducing emissions, protecting oceans and habitat and encouraging conservation while simultaneously branding Scheer as a climate-change laggard.

But Trudeau has also faced much criticism over the Liberal government's $4.5-billion purchase of the Trans Mountain oil pipeline project, which critics see as a direct contradiction of the Liberal claim that the party represents Canada's best choice for environmental policy.

NDP Leader Jagmeet Singh is spending a fourth straight day in British Columbia, beginning with an announcement on coastal protection in Ladysmith, on Vancouver Island, before joining climate protesters in Victoria.

People's Party Leader Maxime Bernier is campaigning at home in Quebec's Beauce region, where he's striving to keep his seat after breaking away from the Conservatives last year.

By Mia Rabson | News, Politics | September 27th 2019
Reports from the Race to a Safer World