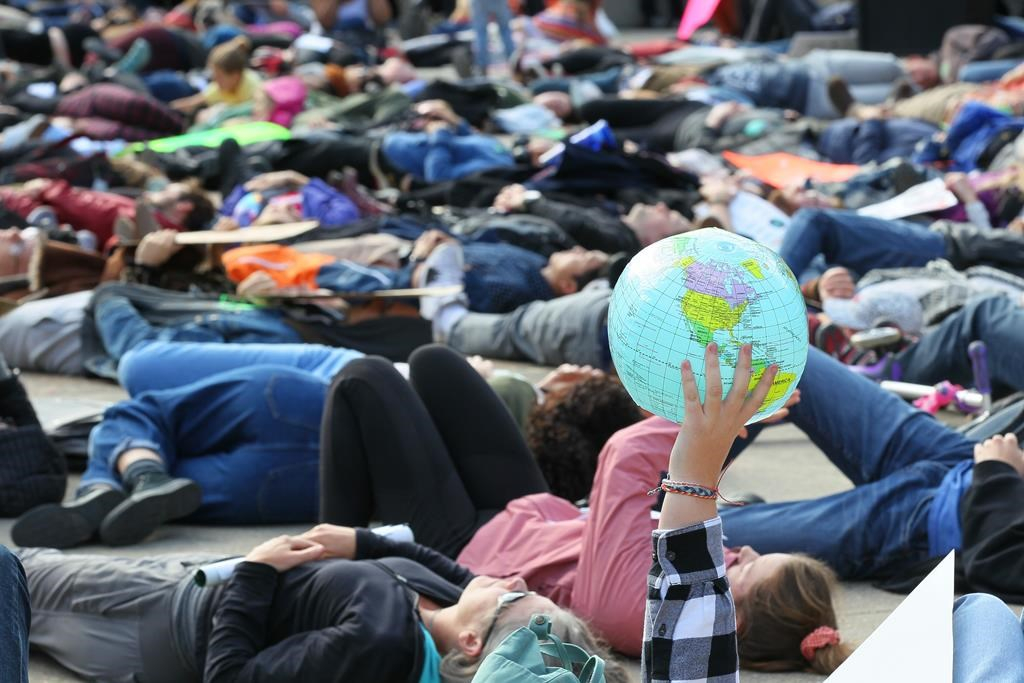 Climate change activists and students gather for a protest and "die-in" on the steps of the Calgary Municipal Building in Calgary on Friday, Sept. 20, 2019. File photo by The Canadian Press/Dave Chidley
Previous story
Next story

Thousands of Canadians are hitting the streets Friday demanding "widespread, systemic change" to halt the scary impact of a warming planet.

The massive national protest will see students and climate activists and everyday Canadians who want a swifter government response to climate change marching on legislatures and municipal buildings, schools and parks, from St. John's to Tofino, B.C., and as far north as Inuvik in the Northwest Territories.

Things started off in St. John's, where a crowd gathered at Memorial University's clock tower shortly before 11 a.m. local time, some people holding signs protesting the province's oil extraction industry. The group plans to make its way to the provincial legislature on Confederation Hill.

A number of international movements are coming together Friday for one, massive climate change protest at the end of what they call "Week for Future." It is a phrase building on the Fridays for Future movement started last year by Swedish teenager Greta Thunberg, whose weekly Friday sit-ins outside the Swedish legislature grew into an global phenomenon.

"As a collective of young people from across the country, we aim to steer Canadian society off our current path of ecological and social catastrophe," says the mandate of Climate Strike Canada, one of the groups spearheading the marches. "Drastic climate action is the only option for humanity."

There was another international climate strike day last Friday, and smaller events across the country last spring, but in Canada the major events are taking place today.

Some school boards and universities are cancelling classes during the protests, or telling students they will not be penalized for missing class during that time. Other school boards are being criticized for being less than fully supportive. The Winnipeg School Division is encouraging students to participate, but still marking them as absent if they miss class.

Students at Memorial University were offered academic amnesty for absences on Friday, and the province's English school district said students would be excused from class with a guardian’s permission. Metrobus, St. John's municipal transit system, is offering free rides between 10 a.m. and 2 p.m. to accommodate participation in the climate strike.

Several retailers and workplaces are closing, at least for the duration of the protests, including Mountain Equipment Co-op, Lush Cosmetics, and Bridgehead Coffee in Ottawa.

Coming as it is in the midst of Canada's federal election campaign, four of the six mainstream party leaders will be marching. NDP Leader Jagmeet Singh is marching in Victoria. Liberal Leader Justin Trudeau and Green Leader Elizabeth May will both be in Montreal, where the Swedish schoolgirl who started it all will also attend. Bloc Quebecois Leader Yves-Francois Blanchet will also be at the Montreal march.

Conservative Leader Andrew Scheer said there will be Conservative representation at the Montreal march, but he will not be attending any events. He has an announcement planned later Friday in British Columbia. People's Party Leader Maxime Bernier, the only national party leader to deny climate change is a crisis caused by human activity, is campaigning in his home riding of Beauce in Quebec.

On Monday, Thunberg delivered a scathing rebuke to world leaders at the United Nations climate summit in New York City.

"For more than 30 years the science has been crystal clear," she told them. "How dare you look away."

Also on Monday, she filed a complaint with 15 other children alleging five UN members —Argentina, Brazil, France, Germany, and Turkey — failed to uphold their obligations under the Convention on the Rights of the Child by not doing enough to stop the climate crisis.

Thunberg said they are the five biggest emitters who signed the convention, though Canada ratified the convention in 1991 and has annual greenhouse-gas emissions greater than all but Germany in that list.

The world's biggest emitters, including China and the United States, did not ratify the convention.

Climate Strike Canada has a list of demands that includes:

— Canada's recognizing its "disproportionate role" in the climate crisis.

— Enshrining the right to a healthy environment in law.

— Setting "bold" targets to cut greenhouse-gas emissions to just one-quarter of what they were in 2005 by 2030.

Canada's current goal is to cut them to 70 per cent of 2005 levels by 2030, though Trudeau and May have both promised to exceed that and to make Canada carbon neutral by 2050.

— with files from Holly McKenzie-Sutter in St. John's, N.L.

Greta Thurnberg , the maiden from Sweden has become the Global Village JOAN OF ARC of today. Her insight is that we humans are wilfully destroying the Biosphere that the future of our species and most others depends. Her voice is heard world wide by those who's personal interest is largely in there being a future. Evidence todays strike for climate action . Still a fast closing window of a few years to bring our impact to neutral and then positive on what sustains life . We humans are now the agent that determines if life as we know it survives on the only place in the universe . We are in a capsule floating in space, fueled by the radiation of the sun, with a life supporting engine , (Biosphere) that functions by a living organic recycling of this Earth's contents. Our species , for short gain purposes , like none other, has learned how to neutralize too many of Nature's mechanisms that keep other species from wrecking that engine. It is stalling, on the way to stopping! Some know that, also why and how to getting it running smoothly again. Only our political leaders at all levels acting in unison can allow that to happen. We have an option of not becoming another Mars within a few generations time. Why not take it and 'get with it' with a vengeance?