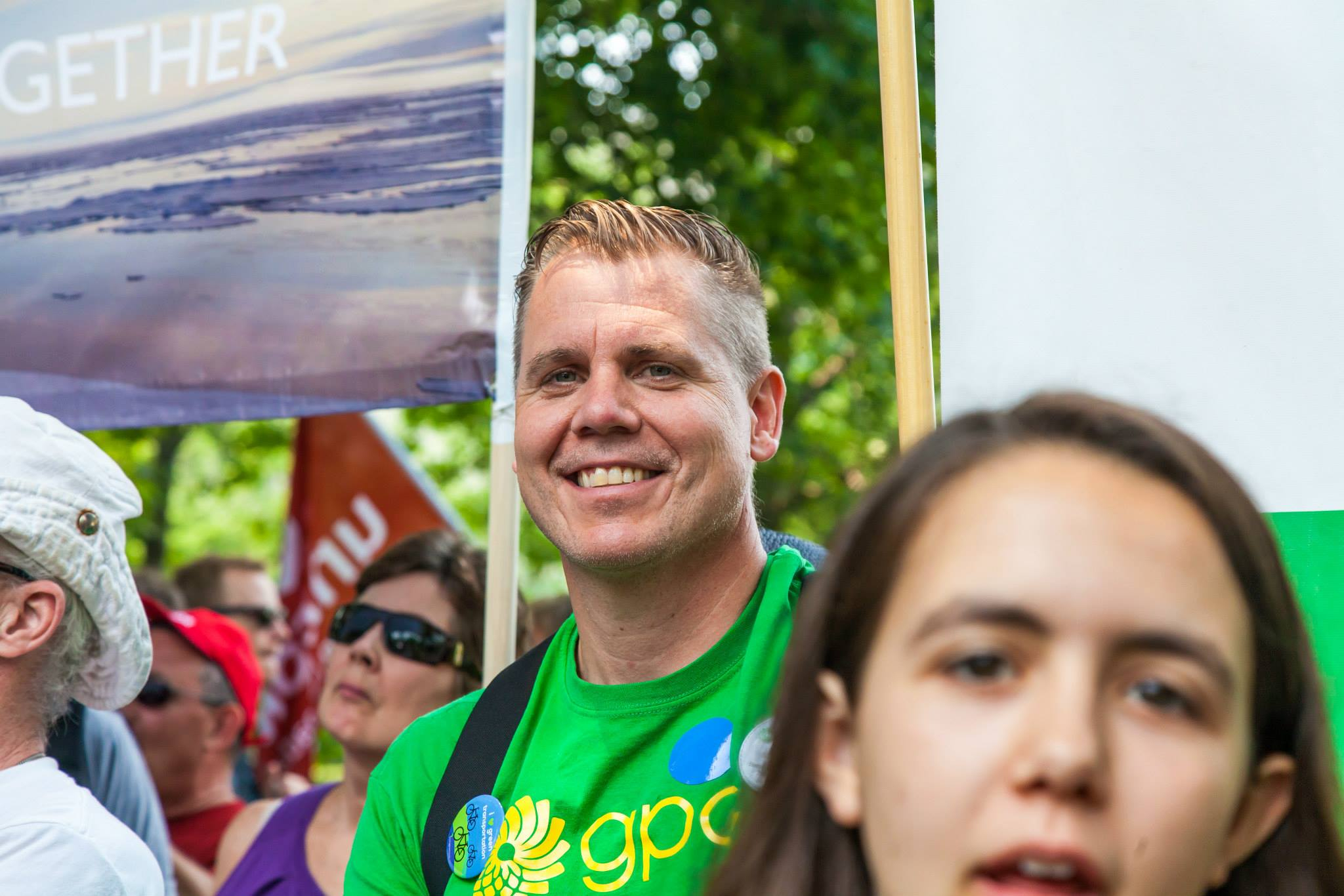 Marty Lancaster is running for the Green Party of Canada in Barrie, Ont. Photo from Facebook/Marty Lancaster
Previous story
Next story

A Green party candidate running in Barrie, Ont., has admitted to wearing a blackface costume a decade ago, but said he'd rather talk about "the issues that are important" in his riding.

In an apology posted to Facebook on Tuesday, Marty Lancaster, a 47-year-old physics and environmental science teacher at Bear Creek Secondary School, said the costume was a mistake he "deeply regrets" and he's committed to educating himself on the issue. He later told National Observer he believes that "after this election, maybe we can have a conversation about systemic racism and all the issues related to it."

Race has been a powerful undercurrent in the leadup to and throughout the 2019 federal election campaign, which is witnessing the first racialized candidate for prime minister and a breakaway Conservative politician who founded a new party that taps into anti-immigrant sentiment. The issue took centre stage last month after shocking photos and video emerged showing the sitting prime minister in brownface and blackface.

Lancaster's admission makes him the second Green candidate revealed to have a history with blackface — the act of depicting people of colour in a cartoonish and dehumanizing way, which emerged as popular entertainment for primarily white audiences in America in the mid-19th century.

Lancaster is running for the second time as a Green candidate after finishing fourth in a six-person race in the 2015 election, which saw Conservative MP Alex Nuttall win the riding of Barrie—Springwater—Oro-Medonte. (Nuttall is not running for re-election this fall.)

On Sept. 20, Global News reported that Greg Malone, a Green candidate in Newfoundland and Labrador, admitted he once wore blackface in a skit for the old CBC comedy show CODCO, where he portrayed Mahatma Gandhi.

Trudeau has since apologized for these incidents, deemed them to be "racist" and said he was unaware of the wrongness of his portrayals at the time due to his "layers of privilege."

Lancaster said he was prompted to come forward after these events.

"I think I wanted to figure out how to make an apology ever since Trudeau had his issue," Lancaster said in an Oct. 1 interview with National Observer. "It helped me to think back to all my costumes and realize that I'd done one as well."

He admitted to dressing up as Mr. T, who played a popular character in the 1980s television series The A-Team, a costume Lancaster wrote "perpetuates racist attitudes."

Lancaster told National Observer this incident occurred 10 years ago at a Halloween costume contest. He was a teacher at the time.

"It’s a mistake that I deeply regret and I’m furious at myself for being so irresponsible and ignorant with my actions," he wrote on Facebook. "It was not worn with malicious intent, but it does demonstrate my past misunderstanding of how hurtful blackface and similar costumes are.

"I think I wanted to figure out how to make an apology ever since Trudeau had his issue. It helped me to think back to all my costumes and realize that I'd done one as well."

"I now know better. I will continue to educate myself and work for opportunities to rebuild the trust of my community, my family and especially the community of persons of colour whom I have hurt."

In the interview, Lancaster said he made the admission and apology "based on a recognition that in the past, I wore a costume that may have offended others."

"This is a challenge for all of us to work through and figure out how to have a better conversation about race," he said, adding it would be "a reasonable, not high-energy conversation that works through all kinds of layers."

Lancaster admitted his community of Barrie is also grappling with the issues of racism, as previously reported by National Observer. But he said he doesn't have "a road map" at present on how to deal with those problems.

"My post was sincere," he said. "I am improving my understanding and capacity to understand."

But as a running candidate in the fall election, he says, he is focusing on the issues that he hears about most: affordability and climate change.

National Observer did not receive a response from the Green party at the time of publication.

The serious $70 BILLION climate plan you’ve heard nothing about

There's an unspoken elephant in the room looming over the touchstone electoral issues of "affordability" and climate change.

That elephant is the sacred cow (to mix metaphors) of unfettered, under regulated, increasingly irresponsible capitalism. Today's versions of capitalism are dishonourable stains on the economic system that has, in the past, driven the extraordinary energy, innovation and development of the industrialized world.

Certainly there were dreadful instances of exploitation, criminal fraud, wilful ignorance of consequences, etc. throughout capitalism's history. But now, it seems the entire captialist structure rests on the legalisation, the "normalization" of such greed and criminal practices.

And how does "race" play into the current capitalist environment? Entire economies were built on the exploitation of workers, as actual captive slaves, or virtual slaves (viz. coal miners vs coal mine owners) Colonial powers sought to "enslave" in one fashion or another, the indigenous inhabitants of the lands they invaded. Almost without exception the colonisers were white and the indigenous people of other colours.

Universally, for centuries, white europeans unquestioningly "knew" they were the superior race and deserved to rule the world and they actually succeeded for a couple of hundred years, with many more years engaged in the prior bloody, genocidal business of subduing the sub-humans they encountered.

As the colonial system and its untenable certainties have crumbled we are experiencing the supreme whites in retreat and this phenomenon has spurred the violent eruptions of the thrashing, dying myth of white supremacy. Black and brown imitations/caricatures are the most feeble, if not the most cowardly, way for white privilege to manifest itself. It rarely evokes the justifiable rage it deserves because, if you examine the phenomenon, I would guess it generally occurs among other white onlookers, almost exclusively. I have no doubt that some of these festivities were entertained or served by people of colour whose sensibilities were/are, of no account.

The capitalist bugbear of "affordability" really only applies to victims of capitalism, whether slaves, or wage slaves, or exploitable, increasingly redundant, and systemically underpaid human workers. Every capitalist effort is being made to do away with the troublesome human work force, devising superior robots and boss "controlled", algorithm driven, artificial non- human intelligence, or what passes for it; what is "fit for purpose."

For example, Journalism produced by AI can easily and reliably be programmed to produce the journal owner's political, social, economic beliefs, attitudes, and "truths" without the nuisance of independent minded human brains screwing up the message. AI is proof against having to employ diverse workers.

Affordability is actually the centuries long product of human greed. Probably the real original sin, it springs from the genetic coding in homo sapiens to hoard resources to ensure personal/tribal survival. Racism is just another expression of the age old war for supremacy and is embeded in the mechanisms of the capitalist business model.

The final touchstone "climate change" is the ultimate revenge exacted by the immutable laws of physics, of evolution and of nature. Humanity has lethally tampered with all the delicate balances that have made earth habitable and if we don't smarten up - "affordability" will be the least of our problems

Excuse me, but I don't

Excuse me, but I don't believe any of these recent 'black face' incidents are racist, either intentional of unintentional. There is nothing to indicate that these situations are examples of people engaging in the same sorts of acts as those of historic black-face acts that mocked people's actions because of their skin colour. This is all just getting a little silly. There are plenty enough acts of blatant racism out there such that we don't have to rely on these dress-up situations as examples. Personally, I'm sick of this 'black face' nonsense trivializing real racism and allowing politicians to avoid serious discussion and instead focus on trivialities. We're obsessing on squeaky clean political correctness while knee deep in s..t. Let's cut the c..p and get real.

Apologies for something one

Apologies for something one did in the past in all innocence of how it might be assessed in the future, to me makes the use of the word hollow. By accident or good legal intention all of us will be found to "be found wanting" , even criminal, in the eyes of some future culture. This suggests that those portraying individuals of the past should be condemned for appropriating the recollection of someone and projecting the simulation in live theatre, cinema or however. Cartoonists too beware! To me, the media has a responsibility to not report everything that happens in a destructive context . We are on the cusp of wiping ourselves (our species), out. Nature seems to be on the way to getting rid of us for being a misfit species not abiding by the laws that make a durable livable climate possible. The only hope for future generations of us is to focus our energy and actions on adjusting our impact on the biosphere to a neutral one, better still a positive one. Our leaders whoever we get need all the help we can muster to achieve that end. The window to make the change is closing fast. It is being defined by science. Quit the distractions, I say