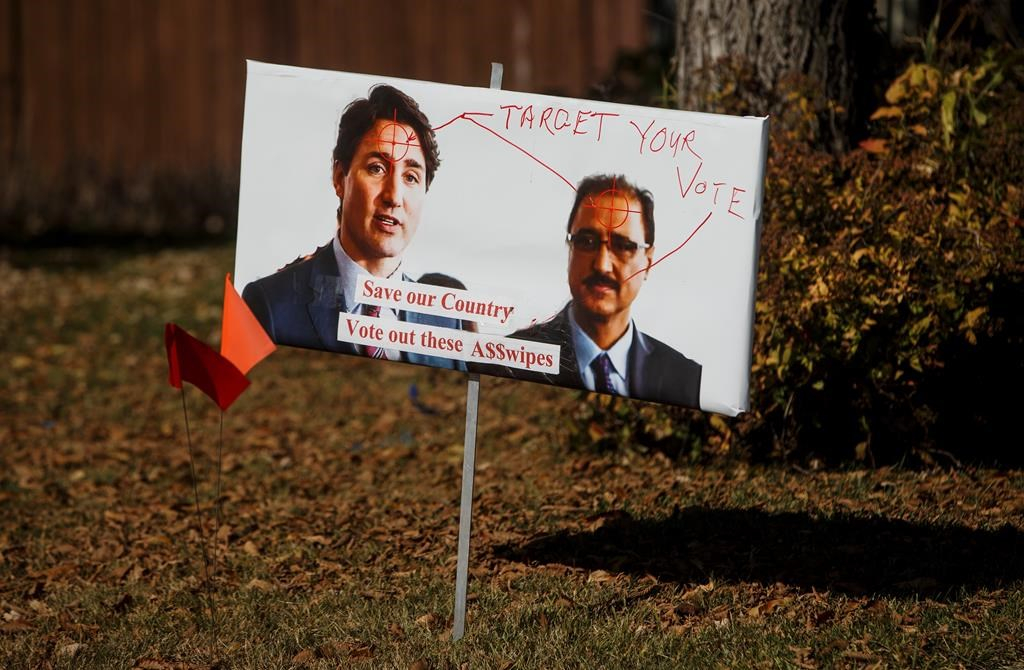 Edmonton police say an election lawn sign depicting a target on the foreheads of Liberal Leader Justin Trudeau and local candidate Amarjeet Sohi is being investigated by their hate crime unit.

A photo of the sign, found on a lawn in the city's Mill Woods neighbourhood, was posted to social media Wednesday by a woman who spoke out against it.

Police say they have not received a formal complaint about the sign but are investigating.

The man whose property the sign is on maintains it wasn't intended to incite violence.

Les Deavu says it's meant for people to target their vote and "get a responsible government."

He says he removed another sign on his lawn supporting Tim Uppal, the Progressive Conservative candidate for the Edmonton Mill Woods riding.

"There's nothing hatred about this, except I hate my tax dollars being wasted, and they're very good at doing it," he said of the Liberals.

Sohi reacted to the sign, saying it was disturbing but not reflective of his riding.

"Rest assured, this won't stop me from talking to my neighbours on their doorsteps," he tweeted.

Uppal said in a tweet that "threats of political violence have no place in our democracy."

"I've instructed my campaign to remove our sign from this property," he added.

As of Thursday afternoon, Deavu had amended the anti-Liberal sign to include the words "target your vote." (CTV Edmonton)

As climate takes the stage at 100 debates across Canada, so does race