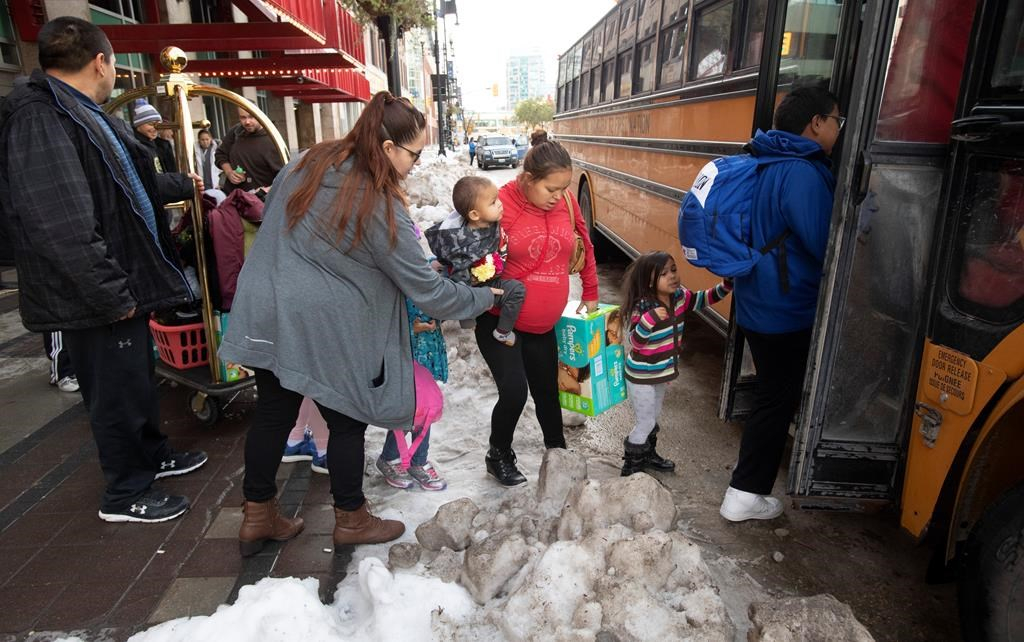 Evacuated families from the Lake Manitoba First Nation load their belongings onto a bus outside a hotel in Winnipeg, on Monday, October 14, 2019. Photo by The Canadian Press/Adrian Wyld
Previous story

Families forced to flee the Lake Manitoba First Nation are expressing frustration around evacuation efforts following a recent snowstorm that's left thousands of people in the province without electricity for days.

Babies and seniors alike were crowded into a Winnipeg hotel lobby on Monday waiting for buses in what one woman described as a maddening series of events that have left people feeling like animals.

They said they weren't sure where the buses would be taking them.

By coincidence, Conservative Leader Andrew Scheer's campaign arrived at the hotel and some of the evacuees asked for a chance to express their concerns to the media.

Margaret Missyabit's voice broke as she described walking out of her home on Saturday when the power went out to try and find out what was going on, saying the community was given little time to gather the things they needed before leaving.

She said no one had received any government assistance.

"Give us our funds, and quit shuffling us around," Missyabit said. "We're not animals to be shuffled around like this. It's frustrating."

Approximately 20,000 Manitoba homes and businesses remained without power Monday in the wake of a snowstorm that the province's Crown energy utility said had left an unprecedented amount of damage to transmission lines, towers and more, and now says could take more than a week to repair.

"I wish I had better news to share," Manitoba Hydro president Jay Grewal said in a statement.

The Canadian Red Cross opened a warming shelter at the RBC Convention Centre in downtown Winnipeg over the weekend for up to 11 First Nations, which it said was necessary because of the potential number of evacuees as well as a lack of available hotel rooms.

The move makes it easier for Manitoba Hydro crews to access private land and invokes help from neighbouring provinces and states — Ontario, Saskatchewan and Minnesota — that were being asked for workers, poles and even transmission towers.

"While many Manitobans are preparing for a return to work after a long weekend, there are areas of the province still feeling the impact of the storm and much restoration and cleanup work remains," Pallister said in a news release Monday afternoon.

"The cities of Winnipeg and Brandon will also host a number of evacuees for several days."

Relief came in two forms Monday for residents of Portage la Prairie, a city of 13,000 people, who were urged throughout the weekend to avoid flushing their toilets because of a lack of power at the city's sewage lift stations.

The city tweeted that power to the stations has been restored, and that Hydro crews are expected to have electricity restored to the vast majority of the city by late Monday.

Winnipeg, meanwhile, is facing the cleanup of thousands of downed trees, which it said could weeks.

The Assembly of Manitoba Chiefs said Indigenous Services Canada and the province haven't done enough to help the First Nations evacuees, with Grand Chief Arlen Dumas stating in a news release that the governments' policies may work in an urban setting where alternative resources are available, but they fail in remote Indigenous communities.

"People have been without heat and water for days, including babies and children. We need to get them help immediately," Dumas said on Sunday.

Missyabit, meanwhile, aimed some frustration at Scheer, saying he shouldn't be campaigning in the area.

"If he wants to campaign he should help the people," she said.

The Scheer campaign said they were unaware the hotel was being used to host evacuees, and they had not asked for them to be moved.

This report by The Canadian Press was first published on Oct. 14, 2019.