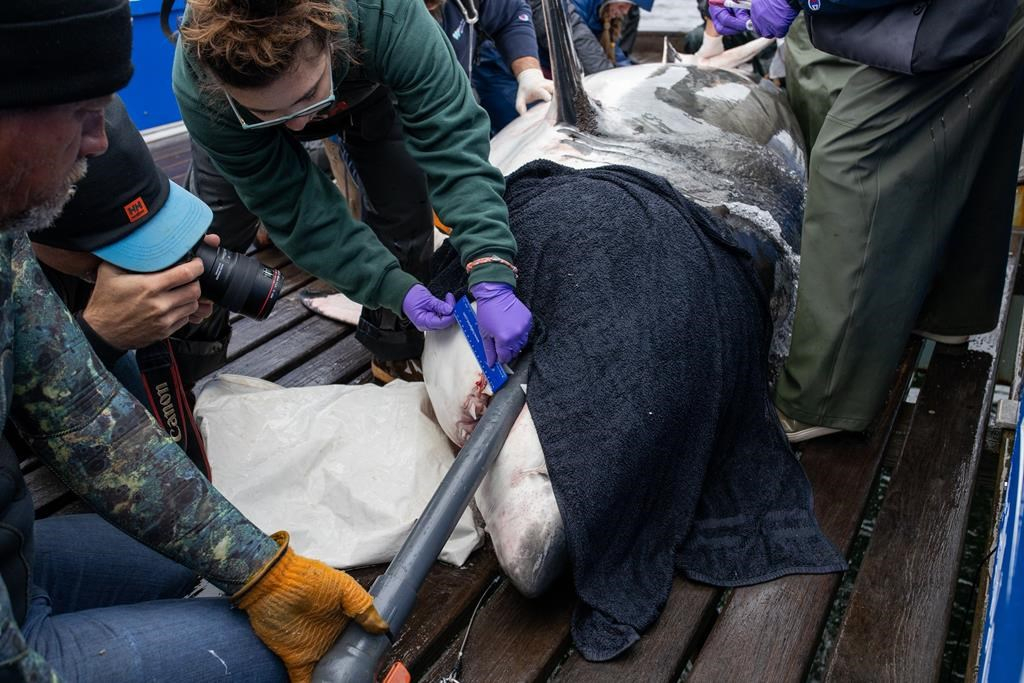 Ocearch team members collect samples from a shark on board a shark research vessel in LaHave, N.S., on Friday, Oct. 4, 2019. Photo by The Canadian Press/Riley Smith
Previous story
Next story

Enthusiastic scientists aboard the research vessel MV Ocearch pumped their fists as a voice crackled over the radio announcing the expedition had hooked its 11th great white shark this fall off Nova Scotia.

But to some marine biologists, what unfolded recently on this non-profit research ship wasn't cause for celebration — instead it raised ethical questions over methods used to attract and study the ocean predators.

About 30 minutes after it was hooked, a mature male — its tail thrashing — was brought alongside the converted American crab ship, as vessel captain Brett McBride leapt onto the submerged platform that raised the animal out of the ocean.

The massive, 3.6-metre shark briefly reared its head in protest as the mariner manoeuvred it onto its side, causing the fish to suddenly go still amid the humming sound of the hydraulic lift.

A black cloth was placed over the shark's eyes, a tube pumped water through the gills and six scientists descended to the platform, allowing themselves 15 fast-paced minutes to take blood, parasite, muscle, fecal and semen samples.

Veterinarian Mike Hyatt of the New York Aquarium cut the shining white belly to install an acoustic tag, as University of Windsor research associate Dan Madigan drilled the satellite positioning tag — referred to as a SPOT tag — to the dorsal fin. It's this tag which will allows thousands of people who've downloaded an app to follow the shark's movements online.

But behind the excitement, an unresolved scientific debate has bubbled away over how sharks, notoriously sensitive to handling, are impacted.

During a briefing, Hyatt said blood tests taken at the beginning and end of such intense captures show the animal's stress levels don't rise. "What's quite astonishing ... is working with them out of the water their stress levels stay the same and sometimes actually improve," he explained.

However, while marine biologists interviewed by The Canadian Press concur with Hyatt's view of the shark's short-term reaction, they wonder what will happen to internal organs and reproductive systems in the months and years to come. Some shark researchers refuse to use the method.

At the federal Bedford Institute of Oceanography in Halifax, Heather Bowlby, the research lead at the federal Canadian Atlantic Shark Research Laboratory, has shifted away from systems that involves hooking sharks or bringing them aboard ships.

This season, her team used a lure to attract a four-metre female and then a harpoon to rapidly attach a pop-up archival tag near its dorsal fin.

The recording device will later detach and float to the surface and provide light, temperature and depth data that will help Bowlby study its habitat and habits.

"There's been a general shift in the shark research community to move away from bringing sharks on board a boat," she said in an interview. "All of their muscle is concentrated in their back and it does press down. They don't have a rib cage. They're not designed to be out of the water, and that's why we have moved to tagging inside the water."

Gregory Skomal, who leads a Massachusetts Division of Marine Fisheries study group off Cape Cod, says he uses a spotter plane and harpoon methods like Bowlby's "to minimize invasive handling."

He said he has questions about the impact of Ocearch's method. "It could be creating long-term problems for the future reproductive success of the animal .... It's an area that people are very worried about."

Chris Lowe, a veteran shark researcher with the University of California at Long Beach, says he observed the impact on a younger shark after he bolted a SPOT tag to it, and the fin bent over and deformed over time.

"At that point I elected not to use them any more due to damage to the fin .... I don't think we've developed a good enough tag design that's designed to come off or to minimize damage," he said.

Still, Lowe says this may not hold true of more mature sharks, and there are tradeoffs for scientists who don't use the Ocearch methods.

He says the pop-up tags he harpoons onto sharks are less accurate in tracking the sharks' precise journeys — and he can't collect the volume of data on blood, genetics and parasites.

Meanwhile, Ocearch's method can combine the positioning provided by the SPOT tags with the archival depth and temperature information from the pop-off tags. It's a practice the group has used for females the last two years, providing a potentially rich source of data.

Chris Fischer, the expedition leader and founder of Ocearch, firmly disagrees with critics and says he's gathering "a whole suite" of valuable information widely available for scientists to examine and which will lead to improved fisheries management.

"These will be the most comprehensively studied individual white sharks in history here in Canada," he said during an interview after the expedition ended its work, which ran from Sept. 13 to Oct. 4 off Cape Breton and Lunenburg.

The precision of his tagging methods could help researchers locate the "holy grail" of the nursery where mature females reproduce and give birth, he said aboard his research ship.

Meanwhile, Robert Hueter, the chief scientist with Ocearch, says photos of great whites tagged in the eastern Pacific that were observed years later after the SPOT tags came off "show no significant effect on the shark or its dorsal fin."

The shark biologist at Florida's Mote Marine Laboratory says criticisms about unknown, long-term impacts are "speculation without data," and he notes that during the operation, their team does ultrasound imaging of internal organs and has found no evidence of damage.

"Finally, we put the resulting movements of our sharks on the Ocearch Tracker for all the world to see; clearly our sharks are moving as we know white sharks to do, south in winter and north in summer, with key stops along the way," he wrote in an email.

Still, Aaron MacNeil, the Canada Research Council chair in fisheries conservation at Dalhousie University, has become a critic of the scientific methodologies.

He recently raised the issue of the vessel fishing for sharks near waters where Nova Scotians surf and dive, saying he's concerned it could draw the animals closer to people.

"In my view, the federal Fisheries Department still needs to establish a safe distance for shark-fishing to occur relative to recreational users and exclude shark-fishing within this zone," he said.

Fischer contends that it is not that simple to alter shark behaviour.

A federal Fisheries Department spokeswoman said great white sharks are normally found in waters around Nova Scotia this time of year and in close proximity to coastal areas, and "therefore, it is considered that these research activities are unlikely to significantly increase risks."

Meanwhile, as the season wrapped up, Fischer said he intends to continue his relationship with the federal Fisheries Department, which has granted him permits under the Species At Risk Act and a foreign vessel license.

He says under the conditions of its permit, Ocearch will provide the federal authorities with its tracking information, along with blood, semen, diet, genetic and other valuable information.

"The question for DFO is 'Where do you need us to go next for you?'" said Fischer, noting he would like to return to Cape Breton next year to validate this year's findings.

Alain Vezina, the Maritimes region director of science at the federal Fisheries Department, declined a request for an interview. In written responses, the department said Ocearch is required to provide it with an outline of its activities and the tagging data they collect, and that the organization is to submit a report by the end of this year.

"The methods are intended to minimize any potential impacts to these sharks. Monitoring will be undertaken to ensure compliance with the permit conditions," the email from the communications department said..

This report by The Canadian Press was first published Oct. 14, 2019.

By The Canadian Press | News, Politics | October 14th 2018
State Of The Animal