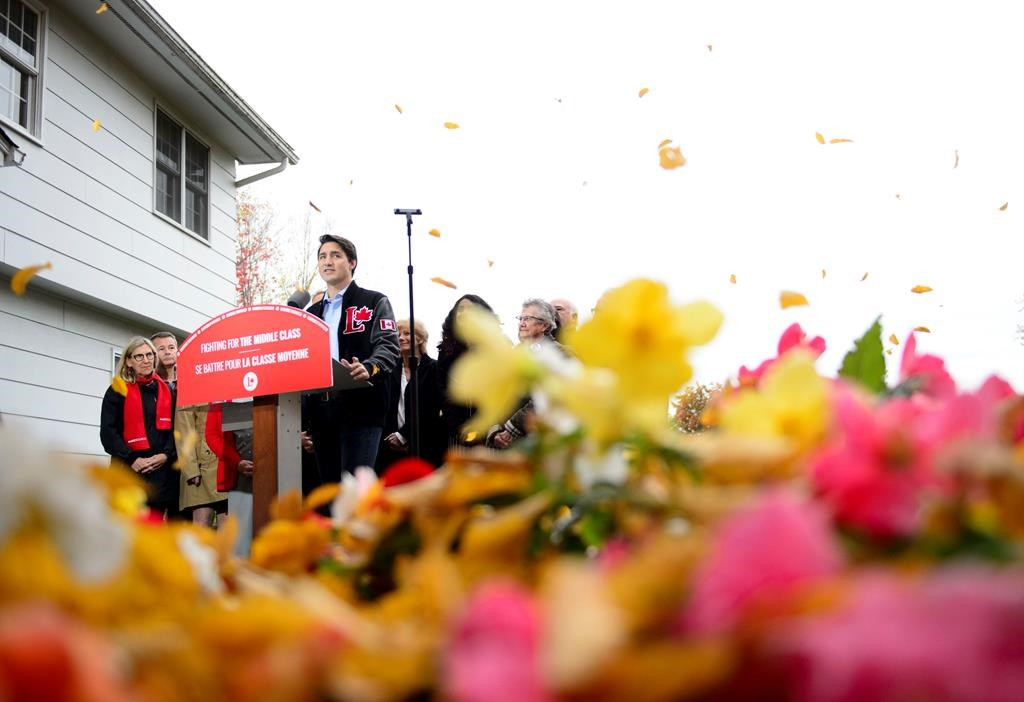 Scheer's optimism contrasted with several polls that suggested his party was deadlocked with the Liberals in minority-government territory, and with the NDP rising nationally and the Bloc Quebecois on the uptick in Quebec.

That left Trudeau and Singh to fight for the largest slice of the federal electoral pie: voters who aren't committed Conservatives, and who are often labelled "progressive."

Elections Canada said 4.7 million Canadians voted early, a 29 per cent increase from the 2015 campaign. It noted that that figure was an estimate because not all polls had reported, and it hoped to have a detailed breakdown by province, territory and riding later this week.

Back on the campaign trail, Trudeau and Singh blasted Scheer as their common opponent in separate attacks. But Singh continued to back away from his weekend comment about forming a coalition government with the Liberals after Scheer called that too expensive a proposition for Canadians.

"I want to be your prime minister. But whatever Canadians vote for come the 21st of October, I want Canadians to win. And, so I'm saying to win, if you vote for New Democrats, we will fight in whatever form the government takes, whatever the power the people give us, to make sure we deliver on the things that people need," Singh said in Toronto.

Singh reiterated his main attacks on Trudeau: that his four years in power have been marked by broken promises, and that only an NDP government will tax the richest Canadians to make life more affordable for working people.

Trudeau, meanwhile, took aim at Scheer and Singh as he began a day of barnstorming through New Brunswick and Nova Scotia, a major portion of the region that Singh has been accused of ignoring, and that the Liberals swept in 2015.

"The choice is very clear: are we going to move forward with a government that invests in people and ensure that everyone has access to a family doctor or are we going to go back to a time when Conservatives simply cut services?" Trudeau posited in Fredericton.

Trudeau said his government protected Canadian workers by signing a new North American free-trade agreement with an unpredictable, protectionist Trump administration that was threatening to rip up the existing deal.

"We succeeded in renegotiating the most important trade deal we have, despite the fact that in the House of Commons Andrew Scheer was calling for us to simply capitulate because that's what Stephen Harper had told him to say," said Trudeau.

"And Jagmeet Singh and the NDP are not supportive of the protections we were able to get for our workers, for steelworkers, for aluminum workers, for autoworkers right across the country."

Trudeau is spending his time in ridings the Liberal party hopes to keep in the federal election on Oct. 21. His schedule put him in Fredericton and Riverview, N.B., before moving on to Cumberland-Colchester, Masstown, New Glasgow and Halifax, N.S., where he'll end the day with a rally.

Trudeau is also trying prevent the Greens from making inroads in Atlantic Canada — from gaining enough support to affect who wins particular seats, if not winning seats themselves. He reiterated his position that the Liberals have done more to fight climate change in the last four years than any previous government.

Scheer was in Quebec, hitting areas where the Conservatives hope to make gains.

Despite the apparent deadlock with the Liberals, Scheer refused to entertain any complex post-election scenario, including a potential Conservative minority, by vowing: "We're going to get a majority government."

"I'll leave it to others, and pundits and analysts to speculate. My job in the next six days is to go get that majority government, and that's exactly what I'm going to do," Scheer said in Quebec City, where he committed to meet premiers in January 2020 to improve interprovincial free trade if he's elected.

Scheer was headed to Trois-Rivieres and the Montreal suburb of La Prairie — two seats held by Liberals and one by a New Democrat.

Scheer also dismissed Singh's comments on Monday that the New Democrats are "not talking about a coalition government," one day after the NDP leader was unequivocal about his willingness to form an alliance to prevent a minority Conservative government.

Edmonton-area Conservative Garnett Genuis, first elected in 2015, posted a video to Facebook raising the idea of the Liberals adopting NDP policies on drugs and immigration to get their co-operation, and floating a cabinet position Singh might seek to promote his views.

"We can imagine what this would mean for Canada on the world stage," he said in the recording, "if foreign-affairs minister Jagmeet Singh under Justin Trudeau were to be representing Canada on trade missions, trade missions to the United States and other countries."