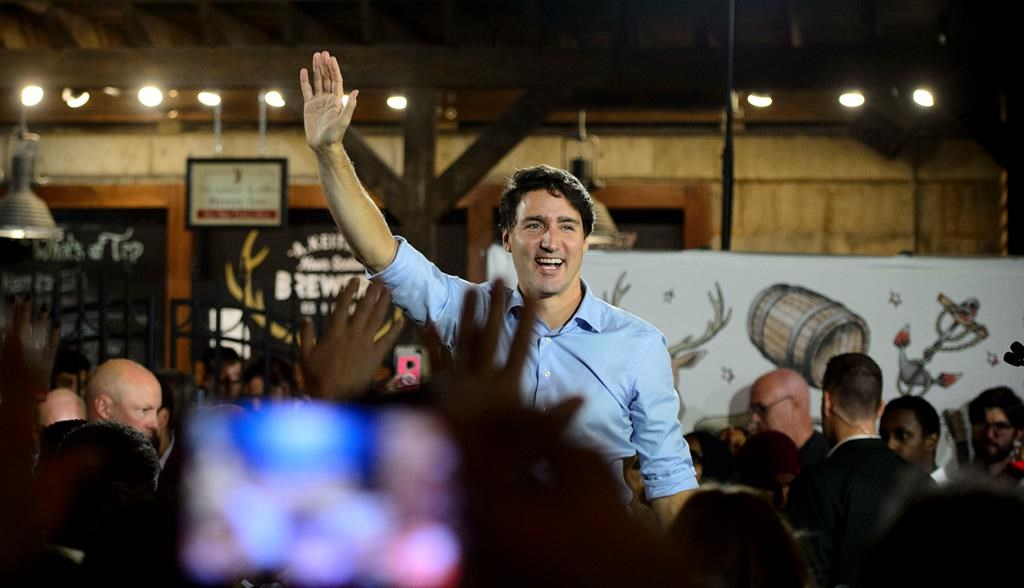 The battle for the hearts and votes of Quebecers took centre stage Wednesday as Liberal, Conservative and New Democrat leaders wooed voters in a province that could determine the outcome of Monday's federal election.

Every federal leader save Elizabeth May began the day in Quebec, including three in and around the Montreal area. And two, Liberal Leader Justin Trudeau and NDP Leader Jagmeet Singh, ended the day in Quebec with rallies intended to show momentum in the province.

It was a rare campaign confluence where major party leaders were in the same area at the same time, and a clear sign of where strategists are focusing their efforts with less than a week to go before election day.

An upswing in support for the Bloc Quebecois threatens to scuttle Liberal and Conservative hopes of winning enough seats to form a majority, and poses even deeper electoral problems for New Democrats, who are in danger of being wiped out in the province.

Singh invoked the legacy of his venerated predecessor, hoping the memory of Jack Layton — the principal architect of the orange wave that swept the province in 2011 and produced the NDP's best-ever showing in a federal election — would separate him from a pack of rivals.

A pilgrimage to Hudson, Que., where Layton was raised, was seen as a bid to appeal to the hearts of Quebec voters. Singh said he wants to build on Layton's legacy and recapture some of that 2011 magic.

"The support that we're receiving on the ground is going to translate to support at the polls and I'm confident that people will see that we will fight for them," Singh said at a morning event in Hudson's Jack Layton Park, alongside Layton's widow Olivia Chow.

Singh wrapped up the day with a rally of about 400 party faithful in Montreal, his last event of the campaign in Quebec. Addressing them in an old public bath east of downtown converted into an event venue, he asserted that the NDP is the only real progressive party, and urged Quebecers not to fall for Trudeau's pitch that they must vote Liberal to stop the Conservatives and ensure continuation of a progressive government.

"I want folks to know, Justin Trudeau does not deserve your votes," Singh said. "For four years, he's clearly chosen. He's made life easier for the wealthy and the well-connected and he has let families down."

He also suggested that the Bloc Quebecois can't be truly progressive when some of its candidates are linked to Marine Le Pen, the leader of a far-right, anti-immigration party in France.

"We are the progressives," he declared.

Trudeau's agenda Wednesday included numerous stops with local candidates on a zigzag tour from Montreal to Sherbrooke, hoping his personal brand would shore up the Liberals' standing in his home province.

He also received a Twitter endorsement from former U.S. president Barack Obama, who tweeted that Trudeau's "progressive leadership" is needed in the world, "and I hope our neighbours to the north support him for another term."

The tweet echoed Trudeau's comments during a morning event at Montreal's botanical gardens where, backed by numerous Quebec Liberals, he urged Quebecers to support his party so they can have a voice in a progressive government. He also tried to frame the choice for Quebec voters contemplating supporting the Bloc.

At a rally Wednesday night in Sherbrooke, Trudeau said he finds it frustrating that the Bloc presents itself as having "a monopoly on Quebec pride." Quebecers have always prided themselves on being leaders on issues like the rights of women and LGBTQ Canadians and protecting the environment but, he argued, they can only be leaders if they are part of the government, not sitting on opposition benches.

"We were able to end the Harper years because Quebecers and progressives throughout the country chose to elect MPs that would form a progressive government ... That's what it takes to stop (Conservative Leader) Andrew Scheer, to stop the Conservatives," Trudeau told several hundred supporters.

"Sure, you can oppose, you can be loud. But if you want to act, we need Quebecers in power, in government, not in opposition."

Earlier Wednesday, Scheer stopped by a Tim Hortons in one of Montreal's northern suburbs with one of his star candidates, former Olympic champion synchronized-swimmer Sylvie Frechette, after spending Tuesday barnstorming the province.

After the appearance with Frechette, he moved on to southwestern Ontario, another vital battleground, sounding a note of confidence for his chances on election night.

"One of the most common phrases our candidates report hearing at the doors, is a voter who answers the door and says, 'I voted Liberal in 2015, I'm voting Conservative in 2019,'" Scheer said in an arena in Essex, Ont., after announcing a promise to legislate stiff penalties for MPs caught in violation of ethics rules.

At a rally later in Ancaster, Ont., Scheer accused Trudeau of saying no to small business, to the energy sector and to ethical and accountable government.

"I am going to turn Justin Trudeau's Canada of No into a Canada of Yes — yes to you keeping more of your hard-earned money, yes to Canada's energy sector and yes to big projects that unite our country with a national energy corridor."

Bloc Leader Yves-Francois Blanchet warned that his party would never support building a pipeline through Quebec or scrapping Trudeau's carbon tax — both of which Scheer has vowed to do.

Blanchet said the other parties want to "pretend we don't exist," but must "change their minds and see the reality" that they could have to gain the Bloc's backing if, as polls suggest, none capture a majority of seats on election night.

He also took aim at Conservative, Liberal and NDP warnings to Quebec voters about voting Bloc on Monday.

"We have not played that game. We did not want to run a negative campaign, a campaign based on anger. Quebecers will be the judges of that kind of strategy," Blanchet said in French.

May, the Green party leader, focused on her party's pledge to create a national pharmacare program in Victoria, near her home riding of Saanich-Gulf Islands in B.C., while People's Party Leader Maxime Bernier spent the day campaigning to keep his own Quebec seat in Beauce.