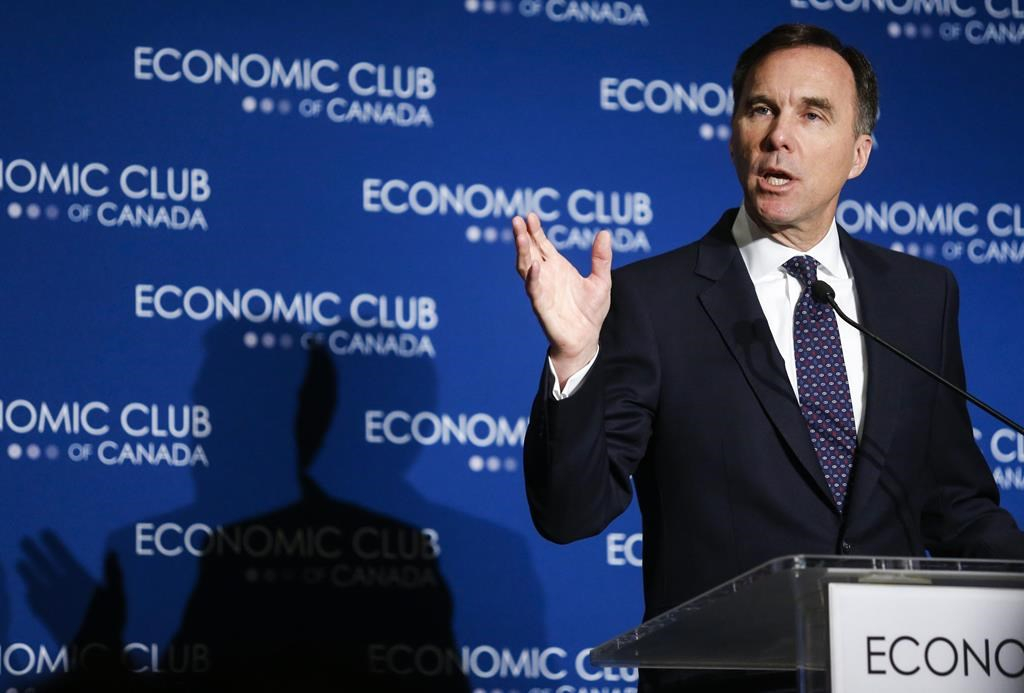 The Liberal government expects to get $500 million a year out of the expanded Trans Mountain pipeline and is promising to spend it all on cleaner sources of energy and projects that pull carbon out of the atmosphere.

Finance Minister Bill Morneau told The Canadian Press in an interview this week that the expanded pipeline is not fodder for negotiating with other parties in the minority government. Rather, he said, it is a crucial piece of the puzzle of financing Canada's transition to a clean energy economy.

"We purchased it for a reason," said Morneau. "We now see how it can help us accelerate our clean energy transition by putting any revenues that we get from it into a transition to clean energy. We think that is the best way we can move forward in our current context."

The Liberal government bought the existing pipeline for $4.5 billion in 2018, in a bid to overcome the opposition of the British Columbia government to the expansion.

Federally, the NDP and Greens — the two parties with the most in common with the Liberals on climate change — think the expansion should be cancelled. NDP Leader Jagmeet Singh underlined that point in a statement Thursday about a phone call the previous day with Alberta NDP Leader Rachel Notley.

"Ms. Notley repeated her support for the Trans Mountain pipeline expansion and I told her that I continue to oppose the pipeline expansion," Singh said, though he added: "While we disagree on TMX, we share concern for the workers."

The NDP has enough seats to support the Liberals through any confidence votes. While the NDP leader has said he wants tougher climate action, Singh has stopped short of using the pipeline as a line in the sand, suggesting that ship has effectively sailed.

Morneau said construction on the pipeline is underway and the decision to go forward has been made, which means there is really no way to use it as a bargaining chip in the minority government.

"My expectation is that we have much common ground between the other parties that have been elected to the next Parliament," said Morneau.

"We will be seeking consensus on how we can move forward on that common ground. This project we've already moved forward on. It's one that we've said that we're moving forward on, we've actually already gone through that process."

Construction on the expansion is supposed to be done by the middle of 2022. The Liberal platform forecasted taking revenues of $125 million from Trans Mountain Canada in 2021-22 and then $500 million in each of the next two years.

Eventually, Morneau said the plan is to sell it back to the private sector and all of the revenues from the sale will then go to clean energy development and other climate change action projects.

The one specific promise the Liberals made that they connected to pipeline revenues was a $300-million annual fund for natural climate solutions including tree planting, as well as conservation and restoration of forests, grasslands, agricultural lands and coastal areas.

Construction on the pipeline was halted in September 2018, after the Federal Court of Appeal overturned federal approval citing insufficient environmental and Indigenous consultations.

Cabinet undertook new rounds of both and approved the expansion a second time in June.

Construction on the pipeline then resumed in August, starting with work on the marine terminals in British Columbia and pumping stations in Alberta. The first 50 km of actual pipeline will start being laid in the Edmonton area shortly, a spokesperson for Trans Mountain Canada said Wednesday.

Thus far, more than 2,200 workers have been hired.

The pipeline runs from a terminal east of Edmonton to a marine terminal in Burnaby, B.C. The expansion will see a second pipeline built roughly parallel to the first that can carry almost twice as much crude oil every day.

There is however a new federal court challenge underway from Indigenous communities who argued the secondary consultation process undertaken by the government earlier this year was a sham.

The Parliamentary Budget Officer has reported a $36 million loss by Trans Mountain over the last 7 months since the Liberal Government bought it.

Good luck with those “clean energy benefits” promised by the Liberals. Wishful thinking and fantasy forecasts will not address the catastrophic climate risks we are facing.

More oil to make less carbon? Ri-i-i-ightt ... and since my family's hungry, I'll spend my food budget on produce to tip directly into the compost bin. Because that way we have better soil to grow food for ourselves.
The problem, Mr. Trudeau, is that we have too much carbon production *right* *now* ... there is no magic technology that changes that, and if "technology innovation" had wanted to find a way to fix current levels, it'd have done so by now.
BTW, my MPP (L), offered as a reply to my encapsuled info to her at the door re some of the numbers delivered by National Observer writers, "I didn't vote for it." But ... she ran again for the Liberals.
They're claiming the new pipeline will eventually carry liquid hydrogen. Yep: through wildfire country. You can't make this stuff up.

There's an old folk tale about the impoverished homesteaders whose sole woolen blanket was too short for their bed. The wife decided to cut a strip off the bottom to add to the top but then the husband complained about cold feet so she reversed the addition to cover their feet and they both got frost bitten noses. There is something disturbingly similar about the Liberal strategy for "funding" sustainable energy.

All the information I have

All the information I have seen indicates that the pipeline will not make money, but will lose money. We should all demand that the government produce a business case for building the pipeline. The one Kinder Morgan presented to the NEB, written by Muse Stancil, is easily refuted.