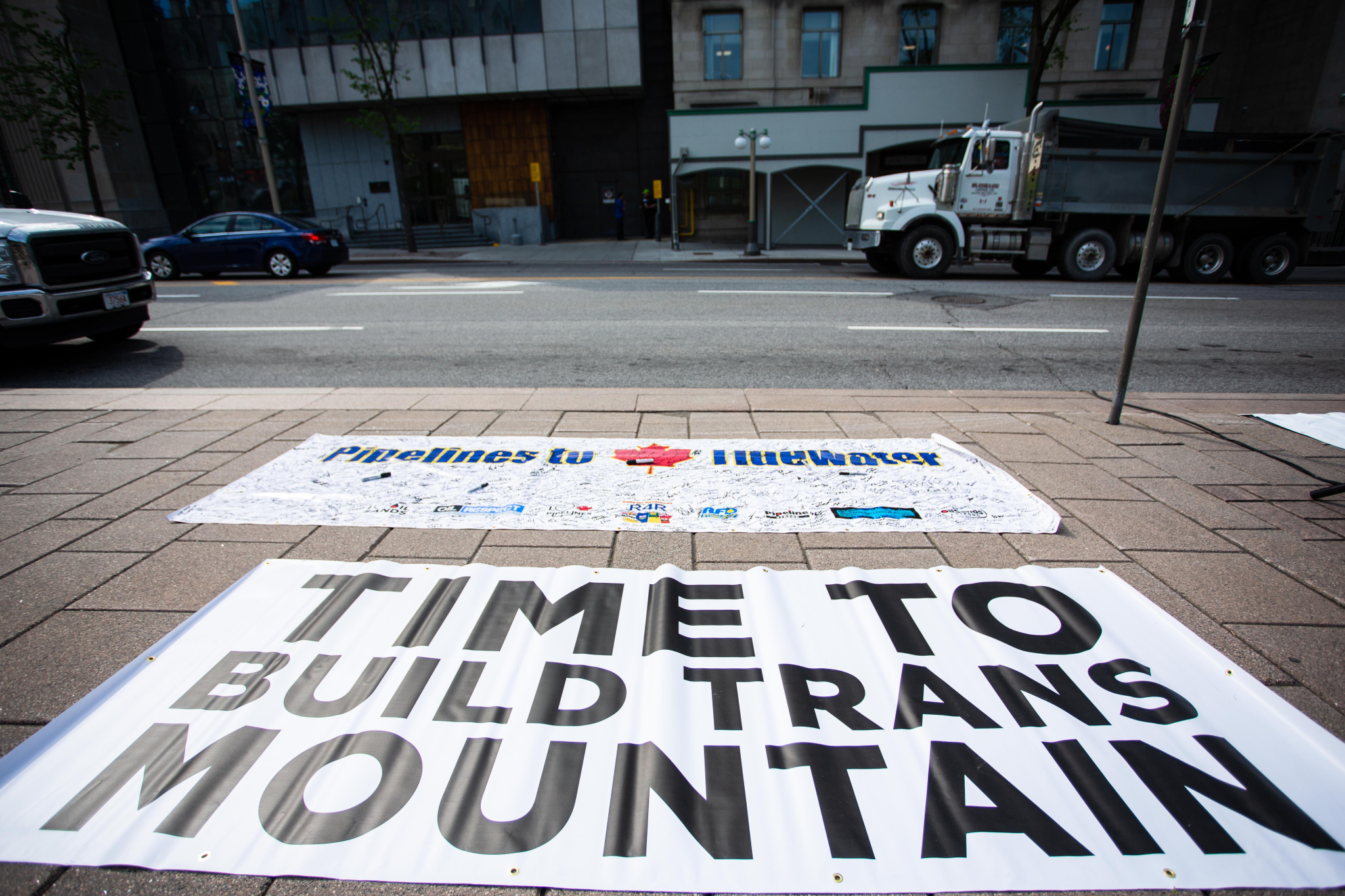 Rally4Resources and Canada Action in Ottawa, as well as Canada's Energy Citizens, organized a rally on May 23, 2018, to support the Trans Mountain expansion. Photo by Alex Tétreault
Previous story
Next story

Project Reconciliation, an Indigenous coalition to bid on ownership of the Trans Mountain pipeline and expansion, recently announced they submitted a preliminary proposal for ownership to the federal government.

The federal government has not begun a formal process to accept proposals or bids, but Project Reconciliation wants to set itself apart, said D'Arcy Levesque, the organization's vice-president of public and government affairs.

"We want to demonstrate that our model is unique, and our level of interest, and our readiness. We're clearly at the front end," he said.

On July 24, CBC reported that Project Reconciliation had submitted its proposal to the government. They did not share details of the proposal but have previously told media they planned for a $6.9-billion bid.

The coalition plans to invest 80 per cent of proceeds into a Sovereign Investment Fund for future investments, possibly including renewable energy. Levesque said they predict within 12 years they could invest over $12 billion in the fund.

The government plans to announce a panel that will lead discussions among impacted communities but hasn't yet made a timeline for formally accepting bids.

"It is too early to discuss the process by which the Government will divest itself of the Trans Mountain entities," Finance Canada wrote in a statement to National Observer.

Finance Canada said the government's priority right now is engaging with impacted communities to "seek input from Indigenous groups on ways that they could benefit."

Project Reconciliation is also conducting its own listening tour to impacted communities.

Project Reconciliation's founder and chair, Delbert Wapass, addressed the 43rd Annual Elders Gathering in Vancouver on July 25, and he talked about why he thinks the pipeline will benefit First Nations economically.

He told the crowd that while colonialism and residential schools had caused harm to Indigenous communities, leaders have to "teach our young people not to be stuck where the pain is."

He said Indigenous peoples have a long history of being "commerce people" and "good business people."

Levesque said when he first spoke to the federal government, he didn't think they were open to complete Indigenous ownership. He said he was excited to hear the prime minister say he was open to "25 per cent, 50 per cent or even 100 per cent" Indigenous ownership when he announced the pipeline's approval on June 18.

"Indigenous People have been denied access to capital, not allowed to participate and have been economically starved," he said. "Ultimately, we look at reconciliation to some degree as economic self-empowerment."

Some First Nations, like Tsleil-Waututh Nation, are committed to challenging the pipeline's approval in the Federal Court of Appeal, no matter who owns it.

Merle Alexander, a lawyer for the Shxw’ōwhámel First Nation who is also challenging the pipeline's approval, wrote on Twitter that "Project Reconciliation is flawed in their efforts to solicit any Indigenous support regardless if they are adversely impacted."

On Indigenous Peoples with Aboriginal Title and Treaty Rights should have a seat at the equity table. Project Reconciliation is flawed in their efforts to solicit any Indigenous support regardless if they are adversely impacted. https://t.co/fuhmTuZuFC

Others, like Anishinaabe author and activist Winona LaDuke, have argued the government is trying to "pawn off" a "bad" project on Indigenous peoples.

"It makes perfect sense that a First Nation, or coalition of First Nations should assume Canada’s debt and liability on a mega-project which will wreak environmental and economic havoc," she wrote in an op-ed for APTN.

Levesque and Finance Canada refuted that Trans Mountain is a risky investment for First Nations.

"The existing Trans Mountain pipeline has been oversubscribed since 2006. The commercial demand for the project is strong," wrote Finance Canada.

Finance Canada said Trans Mountain's consultant, Muse Stancil, has estimated the expansion will boost oil producer revenues by $73 billion over 20 years — though some critics have argued Muse's numbers are exaggerated.

From my understanding of the

From my understanding of the science of climate change and what we as humans are doing to destroy the Biosphere that sustains all life, including ours, the Trans Mountain needs to be closed down now. If the objective of the Indigenous coalition is not to stall it then they should think again. Investing in any measure to promote the destruction of the Biosphere seems counter to the philosophy of living with Nature. Science also revealing that we have little time left to stop our destructive ways, unless it is our desire to preclude a sustained future for our species as well as those other million or so species that are marked for early extinction at our hand. We collectively have a declining chance to bring our impact on the Biosphere in balance with what it is capable of sustaining . Now likely only a shadow of what it was before the Industrial Revolution got in high gear a century or two ago. An internationally co-ordinated action, only many magnitudes larger , like the Montreal Protocol that ended the CFC threat , is called for. Lets do it!

Where do those billions come

Where do those billions come from for the proposed purchase?
This is sad beyond belief, another form of "Divide and conquer".

It's wrong to invest in the

It's wrong to invest in the destruction of our planet and our next generations' futures, no matter who holds the purse. Please let Canadians, no matter their origin or political bent, come to realize that scientists understand science far better than politicians and fossil fuel execs, and also have the public interest at heart, rather than their own wallets.

Mr Trudeau, don't you dare dump this poisonous dud of a project on First Nations peoples. It goes against everything you committed to in the last election.

What an odd siuation, then:

What an odd siuation, then: "oversubscribed" and ??underused?? BOTH at the same time ... smells like a fishy tale to me.
But then what? Everyone can run a "hate-on" aganst the First Nations, for buying into sinking us all deeper down the Petro Rabbit Hole*? Reconciliation indeed!
I'd rather see the whole thing be *given* to the west coast "original peoples" and I'd trust them to refuse expansion and shut down what's there, in an orderly fashion ... provided nothing to do with it could be decided by the non-traditional governance system the feds have done their best to foist off on the traditional system.
Buying TMX was a bad deal for Canada, and it can only be made worse by "new investment."

(*with apologies to Beatrix Potter and Lewis Carroll)

This article about the

This article about the Project Reconciliation bid for TMX raises many more questions than answers. Who are these people? The concept of reconciliation, in this instance, appears to be a veneer to cover someone's desperate attempt to salvage TMX. I hope that the National Observer provides deeper and more probing coverage of the "Project Reconciliation" group as it seems likely that there is much more that needs to be known about them.