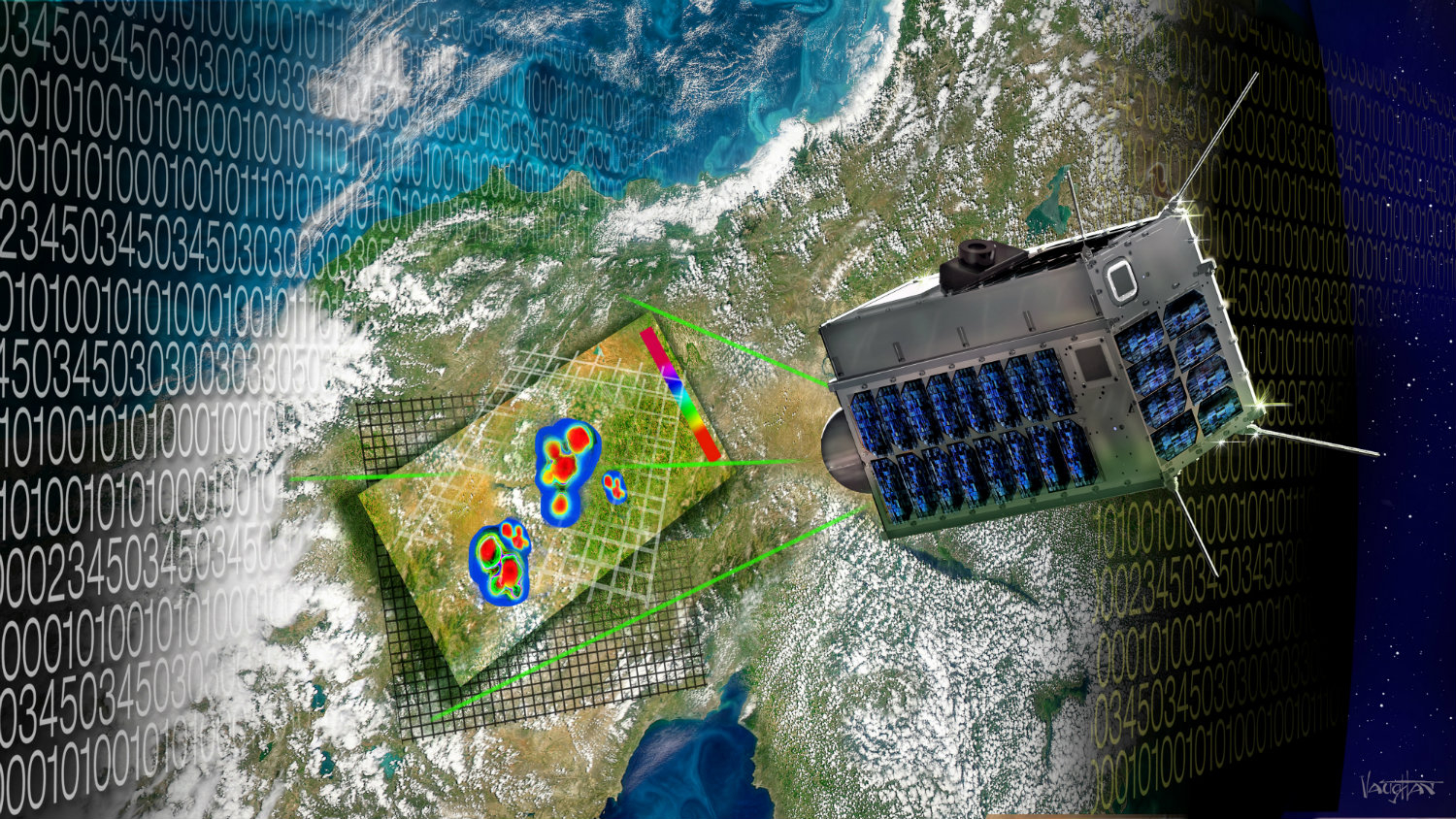 It’s the future in a major Canadian city. Streets hum with electric buses and every burger is made with lab-grown beef. Just after New Year’s Day, people gather around their televisions to watch the annual global carbon count. One by one, an envoy from each country on earth submits their emissions total, then waits nervously as the governing body checks that number against the official list.

How is there an official list? Because satellites have been circling the planet all year, not only able to read the amount of carbon in the atmosphere but to trace where it came from. Canada, it turns out, has underestimated its emissions and is slapped with a penalty.

This futuristic scenario isn’t quite as far away as it seems. Carbon-counting satellites have been around for more than 15 years, with a rash of higher-tech ones in development. Ahead in the field, a Montreal-developed satellite can already pinpoint, from space, the origin of methane emissions so precisely that it can spot individual leaky gas wells.

“Within a period of [about] a day we got ahold of the operator and alerted them to what we saw,” said Stéphane Germain, the president of GHGSat Global Emissions Monitoring, about an anomaly the company spotted in a Texas gas field in 2018.

“They thanked me for the information. They went and checked it out, and then basically they had a hypothesis [of] what the issue was and they fixed it. And so the next time we went over, there was no leak anymore.”

GHGSat, which launched its first demonstration satellite in 2016, isn’t trying to police anyone—it aims to help other companies in various sectors lower their emissions and thus save money, whether by stopping leaks, improving farming techniques or other efforts.

But the company’s early success also offers a glimpse of a new stage in the climate fight: one where the world will finally have reliable information about what’s being emitted where. Even as it has become obvious that restoring the planet’s health depends on knowing exactly how much greenhouse gas each country and industry produces, we often use guesswork and the honour system, essentially, to tally it up.

Spotting a gas leak from the sky

GHGSat’s work is still in relative infancy. Its 2018 case study of the Texas gas leak was exactly that—part of its early efforts to demonstrate its capabilities and build a customer base in the oil and gas sector.

Germain didn’t identify the company involved, though he did provide the satellite images produced at the time.

That summer, the company was zeroing in on the Permian Basin in Texas, a region crowded with thousands of oil and fracking wells owned by many companies. When equipment fails, there can be large leaks of methane—a business loss and a safety risk.

A team of about six people at GHGSat directed the satellite’s path daily, keeping it focused on the Permian Basin. Unlike most satellites, it took in a relatively miniscule swath of the earth’s surface with each pass, just 12 kilometres wide—allowing it to see this area in precise detail, with each pixel-like point of the image representing an area of just 25 by 25 metres.

“When you’re next to a source, like next to a leak in an oil and gas field, all of a sudden the pixels that are next to that are going to get much higher concentration,” said Germain.

An image from August 17th shows a black-and-white vista of rivers, streams and rectangular plots of land—similar to what you could see from an airplane—punctuated by a small but glaring red spot with yellow edges, a visual flag for high concentrations of methane.

Normally, when a leak is suspected, gas companies must send employees driving around hundreds of square kilometres, checking each well with handheld devices.

“It would take a week or more to drive around to all those facilities and look for the leak that we found in 20 seconds,” said Germain.

The company’s strategy in the oil and gas sector revolves, right now, around making that case to producers and trying to win them as regular clients. While GHGSat’s calls may come as a surprise, the reaction from the companies hasn’t been negative, said Germain.

“I’d say the majority, and especially the bigger companies, very much take their environmental health and safety standards seriously, and they want to get ahead of any problems…rather than get surprised by them later on,” said Germain.

The company has set a “very strict rule” to alert the operators first about any problems they find. But there’s always a possibility that some emitters won’t address a leak the company has spotted, in which case, after repeated attempts to resolve it, the company will alert authorities, he said.

“I think we have seen leaks that have been sustained leaks that we’ve really wondered, ‘Why the heck are they doing that?’” Germain. said.

And their observations aren’t limited to Canada and the U.S., where it’s generally simple to get in touch with any operator. GHGSat has spotted problems all around the world, sometimes needing to ask embassies or other intermediaries for help.

“It’s been an adventure,” Germain said.

In the long run, he hopes GHGSat can gather enough international observations to show trends between industries and countries.

The company plans to launch two other satellites in 2020 and to target five markets, all significant emitters: oil and gas, power generation, landfills, coalmines and agriculture.

This August, a federal agency agreed to contribute $3.3 million to a GHGSat project monitoring methane released from a shale gas field in northern British Columbia, the Montney Formation near Fort St. John. The project will begin in 2020 and will also use aircraft, another established way to monitor gas leaks.

Germain, born and raised in Montreal, spent the earlier part of his career in the local “space business”—the city is home to Canada’s space agency and a bigger aerospace industry. But his inspiration to start GHGSat came from another Quebec development, he said.

“The trigger for me was when Quebec announced the cap-and-trade scheme with California in 2010,” he said, referring to the unique, two-member carbon market.

“It woke me up to the idea that…if you put a price on a ton of carbon, that you know, emitters will be motivated now to really manage that financial risk.”

Satellite experts around the world say they haven’t seen GHGSat’s data yet, but it’s one of a small handful of cutting-edge projects. It’s especially rare in its focus on monitoring rather than pure science.

To know if existing climate solutions “have impact, then there’s a recognition that we need to have an operational monitoring system,” said Dylan Powell, an atmospheric physicist who worked on satellites first at NASA and now at Lockheed Martin.

That monitoring will come about through a patchwork of projects, all of them building on the work of earlier satellites that helped reveal some basics of carbon behaviour.

But “it was the first time (it was) possible that you could look at differences in northern hemisphere, southern hemisphere... big transport of greenhouse gases from the northern continent, basically, drifting, for example from the States and Canada over to Europe and Asia and so forth.”

The US, Europe, Japan and China all operate such satellites now, each working slightly differently.

All “see” these gases in the same way, however: by measuring sunlight reflected off them in the atmosphere. Light, refracting off hundreds of different gases, as well as water vapour, has a different signature for each one.

The satellite measurements are checked against major earth-based carbon observatories, such as the one at Mauna Kea in Hawaii. Those relatively early results are already worrying, said Lang.

“Basically, from these ground-based measurements, as well as from the satellite measurements, we are finding that when we compare it to our [predictive] models… we see that we are still missing a substantial amount of carbon dioxide which are not in the models,” he said. “There is more carbon dioxide going in the atmosphere…than the model actually predicts.”

Another “big future challenge” will be to measure how the biosphere, the earth’s plants, react to temperature changes as the planet warms—a crucial variable in how climate change plays out. Satellites will help monitor their carbon absorption, especially a planned NASA satellite that will focus on North and South America. Among other things, it will be able to track in much greater detail how the Amazon rainforest and other important carbon sinks behave over time.

But even sooner than that, as countries begin working in earnest towards their Paris Agreement goals, satellites will also need to become better at providing checks and balances on their self-reporting.

It is already possible for these major, government-owned satellites to monitor emissions from specific sites, somewhat like GHGSat, but less precise—and they need to have a location in mind that they can repeatedly check.

For example, “if we want to know what emission a power plant is, we don't need to locate the power plant on the order of tens of metres,” said Lang. “We just need to know approximately where it is, and then we can quantify quite accurately what's coming out.”

It’s harder to quantify an entire country’s emissions over a given span of time. But the Paris Agreement includes a “stock-taking” process every five years, beginning in 2023, using “the best available science” to measure countries’ progress, in the language of the agreement. Right now, that science isn’t strong.

That’s “not to imply any lie” by the countries, said Powell. But of the methods used, “Some are better than others. Some are not great.”

The current estimates are called “bottoms-up,” he said. “So, you know, we go out to our industries, and they report what their emissions have been, and we collect that data and then we aggregate that all together, and that’s our country’s emissions.”

Only Europe, Lang’s team, is developing a satellite intended to solve that problem—the seventh “Copernicus Sentinel”—with its launch proposed for 2025. A second satellite, a joint UK-French project called MicroCarb, will experiment with other kinds of monitoring work, such as tracking city-scale emissions.

GHGSat’s work doesn’t attempt to fill any global need—its extreme precision also limits the amount of data it can collect. Nor is it clear yet if it will take off within the industries it’s targeting.

But it could help provide scientists with a better understanding of some things, like how methane plumes disperse, said Lang. GHGSat also agreed in September to provide the Canadian Space Agency and European Space Agency with 5 percent of its data at no cost for research purposes.

Above all else, they say, it’s a fascinating experiment that could help usher in a new normal.

“From a scientific point of view, I can only say that it’s great that they’re doing it,” said Lang.

Why Quebec leads in clean tech — so far