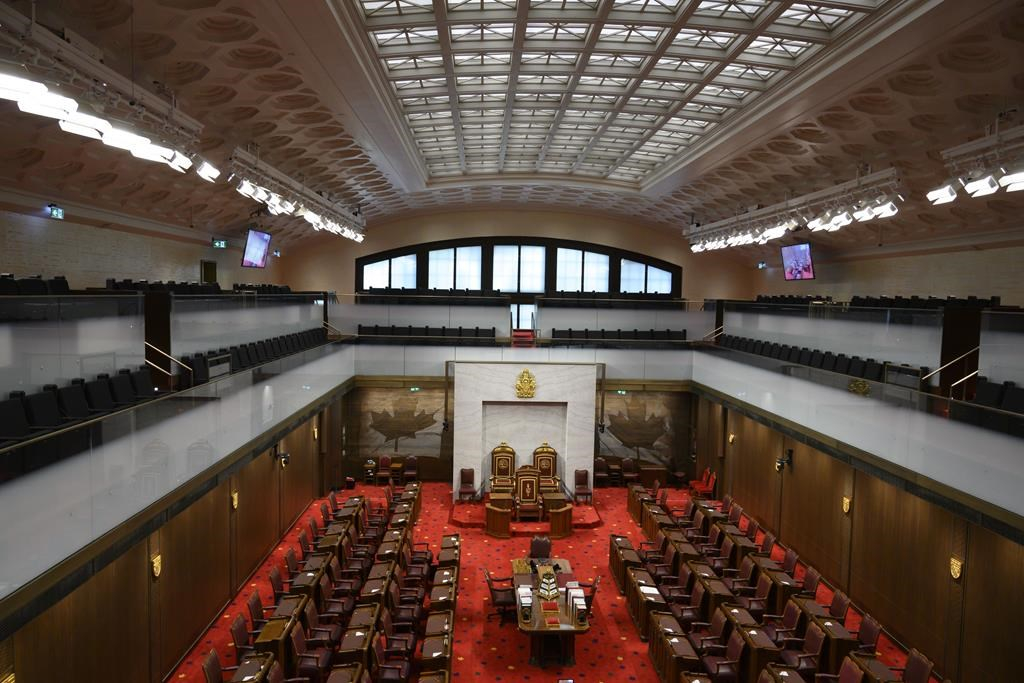 The Senate of Canada building and Senate Chamber are pictured in Ottawa on Monday, Feb. 18, 2019. File photo by The Canadian Press/Sean Kilpatrick
Previous story
Next story

Ongoing efforts by senators to distance themselves from party politics took another turn Monday as a Conservative senator quit his caucus over concerns about the party's leader, and an attempt by the last senators sitting as Liberals to officially rebrand themselves ended.

A decision by Prince Edward Island Sen. Percy Downe to leave the renamed Progressive Senate Group in favour of another independent group left the progressives without the nine members required for official status.

The group had been set up just last week, and Sen. Joseph Day, who had been serving as interim leader, said they intend to continue working as a unit even without the funding and resources that come with official status.

"I can assure you the Progressive group has not disbanded," he said in an interview.

"We are continuing and we're very positive."

The Progressive Senate Group had been made up of senators who, like Downe, had been appointed by previous prime ministers to sit in the upper chamber as Liberals.

In 2014, Liberal leader Justin Trudeau cut ties with them, and when Trudeau formed government in 2015, he began appointing senators as independents. His appointees sit as part of the Independent Senators Group, along with senators appointed under different prime ministers but who are also no longer part of party caucuses. It's now the largest affiliation in the Senate.

Some of those independents have broken off into the Canadian Senators Group, formed earlier this month by 11 senators, most with Conservative ties. This new group's mission is to advocate for Canada's regions.

Downe has now joined them. He did not return a request for comment on his decision to leave the progressives so soon.

Quebec Sen. Jean-Guy Dagenais, however, announced Monday he's leaving the Conservative caucus and going to the Canadian Senators Group over concerns about leader Andrew Scheer's positions on abortion and same-sex marriage. Scheer is personally anti-abortion and has not clearly explained his position on same-sex marriage specifically, though has said he supports LGBTQ rights.

Dagenais blamed Scheer's socially conservative views for a "mass exodus" of support in the province of Quebec, effectively ending the Tories' chances of electing more candidates there in the October election.

There's no possibility things will change in time for the next election, Dagenais said.

"We have wasted a unique opportunity and the result will be the same the next time if the current leader and those who advise him remain in office as is the case at this time," Dagenais said in a statement.

He said his opinions would make it inappropriate for him to continue to participate in the Conservative caucus, but he intends to remain a member of the party.

Dagenais said he made up his mind a day after Conservative MPs and senators gathered for their first post-election meeting in Ottawa earlier this month.

Part of that meeting was an election debrief, with work now ongoing on that score as the Tories probe for insight and intelligence that back up assertions from Dagenais, and others, on why they bled support in both Quebec and Ontario on voting day.

Later this week, Scheer will continue what's being billed as a "listening tour" to hear directly from grassroots members of the party, after it was decided by MPs that it should be up to party members to decide whether Scheer ought to stay on as leader.