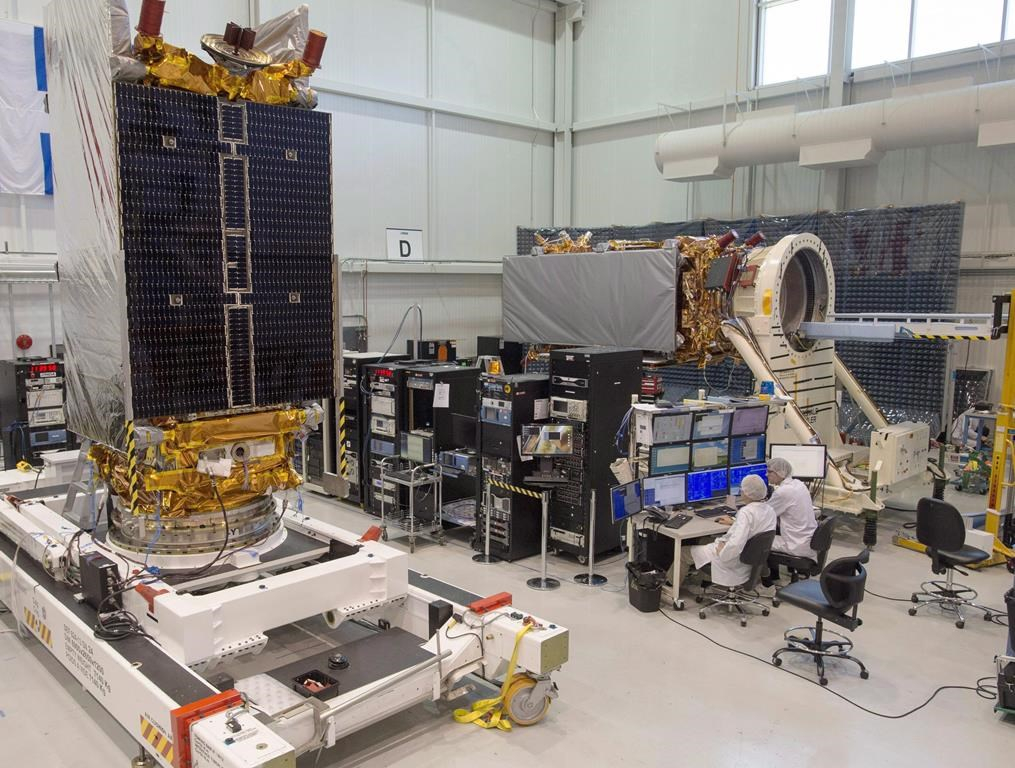 Technicians put the final touches on two of three Radarsat Constellation Mission satellites at the MDA facility on Thursday, June 21, 2018 in Montreal. File photo by The Canadian Press/Ryan Remiorz
Previous story
Next story

The NATO military alliance looked to space, the final frontier, earlier this week as members formally recognized the cosmos as integral to their mutual security, agreeing to bolster ways to defend their satellites and other space-based infrastructure from enemy attacks.

NATO Secretary General Jens Stoltenberg insisted the measure was purely defensive and did not include plans to put weapons into orbit. But it represented a marked departure from the United States, which is preparing to fight a future war in space if necessary.

The divergent views of the alliance, on the one hand, and its largest and most influential member, on the other is in many ways emblematic of the challenge Canada itself is facing when it comes to working with the U.S. on space.

"Because of Canada's alliance with the United States, there might be some pressure to adopt or toe a very similar line to the United States," said David Kuan-Wei Chen, executive director of the Centre for Research in Air and Space Law at McGill University.

"But so far, I think the political leadership and people at the Department of National Defence have resisted that."

The federal government's 2017 defence policy laid out a broad vision for the Canadian Armed Forces' operations in space, which recognized its importance to the country's peace, security and prosperity — and the need to ensure satellites and other assets are protected.

The policy also spoke to the need to work with Canada's intelligence partners known as the Five Eyes — the U.S., United Kingdom, Australia and New Zealand — "with the aim of strengthening deterrence (and) improving the resilience of space systems on which Five-Eyes militaries rely."

Yet it also called for Canada to work with other countries to promote "the peaceful use of space and provide leadership in shaping international norms for responsible behaviour in space" while supporting efforts "to ensure that space does not become an arena of conflict."

"There are members in (NATO) who are vehemently opposed to the entire idea of waging conflict in space, among which Canada is one," said Kuan-Wei Chen, who is overseeing development of a manual dealing with international law and the use of military force in space.

"Canada has become quite a leader in trying to establish fundamental principles or standards of space operations to ensure space is used for peaceful purposes."

The federal government in July called for new ideas and technology to help protect Canadian satellites from natural threats such as solar weather and space debris, as well as cyberattacks, signal-jamming, lasers and anti-satellite missiles.

But the measure is intended to be defensive in nature and address the government's stated desire to make Canada's military and civilian satellites more resilient to threats. So far there are no indications the government is looking at offensive space capabilities.

Stoltenberg explained during a news conference this week that NATO's recognition of space as an "operational domain" similar to air, land, sea and cyber was a reflection of its growing importance to global peace, security and prosperity.

"Space is becoming more and more important for our military operations and missions," he said. "And it also has to do with the vulnerability, the resilience of our civilian societies, because space is so important for navigation, for communications and for many other things."

That does not mean, however, that NATO has any intention of putting weapons into space, he said.

"We are a defensive alliance and our approach will remain fully in line with international law," he said.

The NATO chief later sidestepped a question about how NATO would communicate or otherwise link up with the U.S. Space Command, which President Donald Trump officially unveiled in August. It approaches space as a "warfighting domain."

"I'm convinced that in the future, if we were to get into a conflict with a peer or near-peer competitor, we're going to have to fight for space superiority," Gen. John Raymond, the commander of U.S. Space Command, said this week.

"We are a warfighting command," he later added, noting that meant both offensive and defensive operations.

Raymond went on to insist the U.S. does not want to fight a war in space, and that its approach is one of deterrence rather than provocation.

That distinction has done little to assuage some critics who fear the weaponization of space.

"The U.S. has called it a warfighting domain, whereas the secretary general calls it recognizing space as an operational domain," said Kuan-Wei Chen. "It shows there is a very clear rift in the alliance."

This report by The Canadian Press was first published Nov. 24, 2019.

Military looks to guard satellites from 'natural and artificial threats'