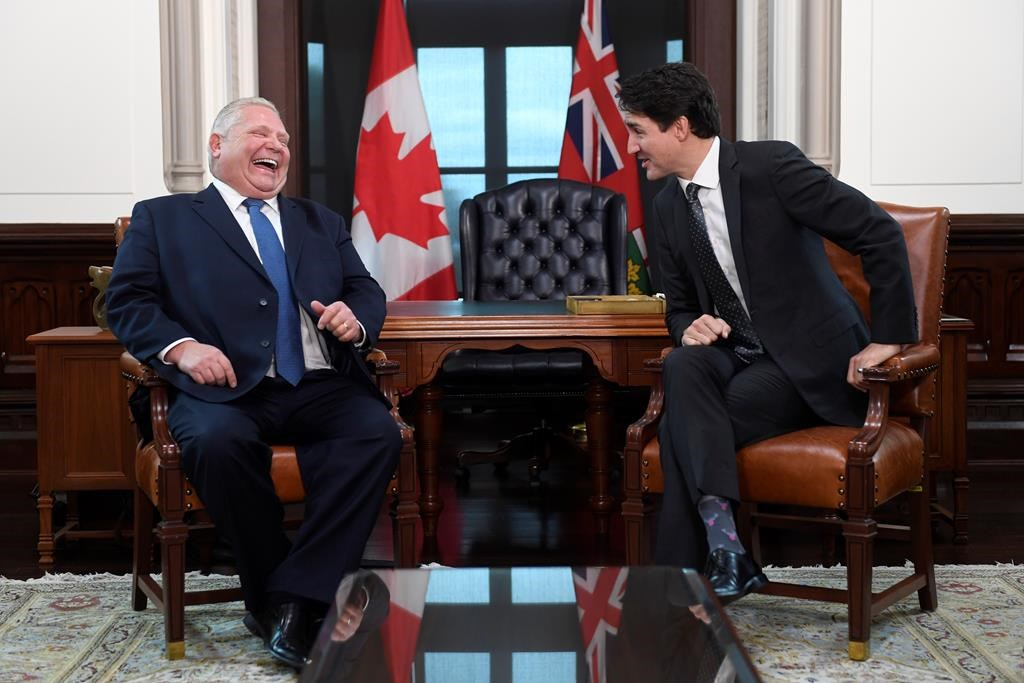 Prime Minister Justin Trudeau and the Premier of Ontario Doug Ford share a laugh after Ford spoke in French during a meeting in Ottawa on Friday, Nov. 22, 2019. Photo by The Canadian Press/Adrian Wyld
Previous story
Next story

Ontario Premier Doug Ford is trying to play the part of Canada's peacemaker, asking his counterparts in Ottawa and in other provinces to turn down the heated rhetoric and find a way to get along.

"We just have to calm the temperature," he said.

"I can't emphasize it enough. We have to stick together as a country and send the message to the rest of the world that we're Canada and we're ready to move forward."

Ford himself was trying to dial back the tension in his relationship with Prime Minister Justin Trudeau, whom he met in Ottawa Friday morning for the first time since Trudeau made attacking Ford a key part of his re-election bid last month.

"It's politics," Ford shrugged when asked whether he carried any grudges or wanted an apology from Trudeau.

The two leaders were calm and cordial as they shook hands before their official discussion, and were even cracking jokes about Ford's recent revelation that he is trying to learn French.

Does Trudeau know any teachers? Ford asked. Yes, and I even used to be one, Trudeau told Ford. But I'm a bit busy these days.

"We're obviously not going to agree on everything but the things that we do agree on, I look forward to working (on) respectfully, collaboratively, and co-operatively, in ways that are going to benefit the people of Ontario and indeed right across the country," Trudeau said.

When Ford came out of the meeting almost an hour later, he was all smiles.

"I thought it was a phenomenal meeting, I really did," Ford said.

That was a far cry from the sentiment last week after Saskatchewan Premier Scott Moe walked out of the same office scowling. Moe called his meeting with Trudeau "disappointing," with no signs the two could find anything to agree on.

But where Moe went into the meeting with demands for Trudeau to pause the federal carbon tax in Saskatchewan change the equalization formula for transfers to provincial governments, Ford went in promising to discuss only issues where he and the prime minister had common ground.

"There's a lot of areas that we can agree on," he said.

Like Moe, Ford is challenging Ottawa in court over the federal government's decision to impose a carbon tax on any province without an equivalent system, but the carbon tax didn't come up in his conversation with Trudeau. Neither did Trudeau's decision to allow municipal governments the authority to ban handguns.

Instead Ford and Trudeau talked about helping Toronto expand its subway system, as well as investments in health care and building Ontario's first French-language university. That latter discussion alone is a sign the two governments are moving beyond past insults, as the federal Liberals stoked anger against the Ford government when it initially scrapped plans for the university.

Ford said Friday he has a great relationship with most other premiers, and is also pushing Trudeau to find compromises with Alberta and Saskatchewan, where economic anxieties are high as the international fight against climate change threatens their fossil-fuel industries.

"I did mention to the PM that we do have to listen to the concerns of the people out west," he said. "They're hurting out there."

A year ago Ford was included with most of the other provincial conservative premiers and federal Conservative Leader Andrew Scheer on the cover of a Maclean's magazine where the group was dubbed "The Resistance." That opposition was largely about Trudeau's climate and energy policies, including the carbon tax.

In June Ford was among six conservative premiers who wrote to Trudeau to demand he fix or scrap bills C-48, and C-69, banning oil tankers from northern B.C. ports and overhauling environmental reviews for major projects like mines and pipelines.

But Moe and Alberta Premier Jason Kenney represent provinces where Trudeau is immensely unpopular — Alberta and Saskatchewan didn't elect a single Liberal MP between them. Ontario, in contrast, helped keep Trudeau in office, and Ford is very aware of that.

"A lot of the people that voted for the prime minister, not all but a lot of them, voted for me," Ford said.

Several hours after the meeting, Trudeau’s office released a "readout" of the exchange that emphasized agreement on a range of issues that included health care, infrastructure, gang crime and the need to cut down internal trade barriers.

"They agreed to continue to collaborate on these important priorities, and looked forward to the next first ministers' meeting," it concluded.

If only Doug Ford had had

If only Doug Ford had had this seeming epiphany before trashing Ontario's green energy investments. Such a terrible loss and setback for the fight against climate heating. It goes without saying that there's not very much of the trustworthy or credible about Ford. Hopefully Ontarians can at least limit any further damages he'd like to induce.

I will be watching closely to

I will be watching closely to see if Trudeau liberals do anything concrete to push forward with green energy in Doug the Destroyer's Ontario. For example: get an injunction on the tear down of White pines wind farm, take it over and get green energy running--or take doug to court as endangering Ontarian's right to clean air and a future
Or put a big rebate in place to buy electric cars and underwrite charging station building on all national roads in Ontario. Or or or a national rebate for top spec insulation of home and business (25% of national emissions)

Ford as peace-maker! I

Ford as peace-maker! I laughed so hard at that I steamed up my glasses! I'd sooner expect a hypo to dance Swan Lake. Ford'll have to learn how to curb his mouth big-time before he can hope to succeed at generating even a few ounces of calm. We might as well expect pigs to fly, or a baboon to posit a Grand Unification Theory. Anyway, is this calm supposed to start before or after Ford finishes suing Ottawa over the Carbon Tax, or killing all the environmental projects and legislation? Sorry to be so negative, but really.