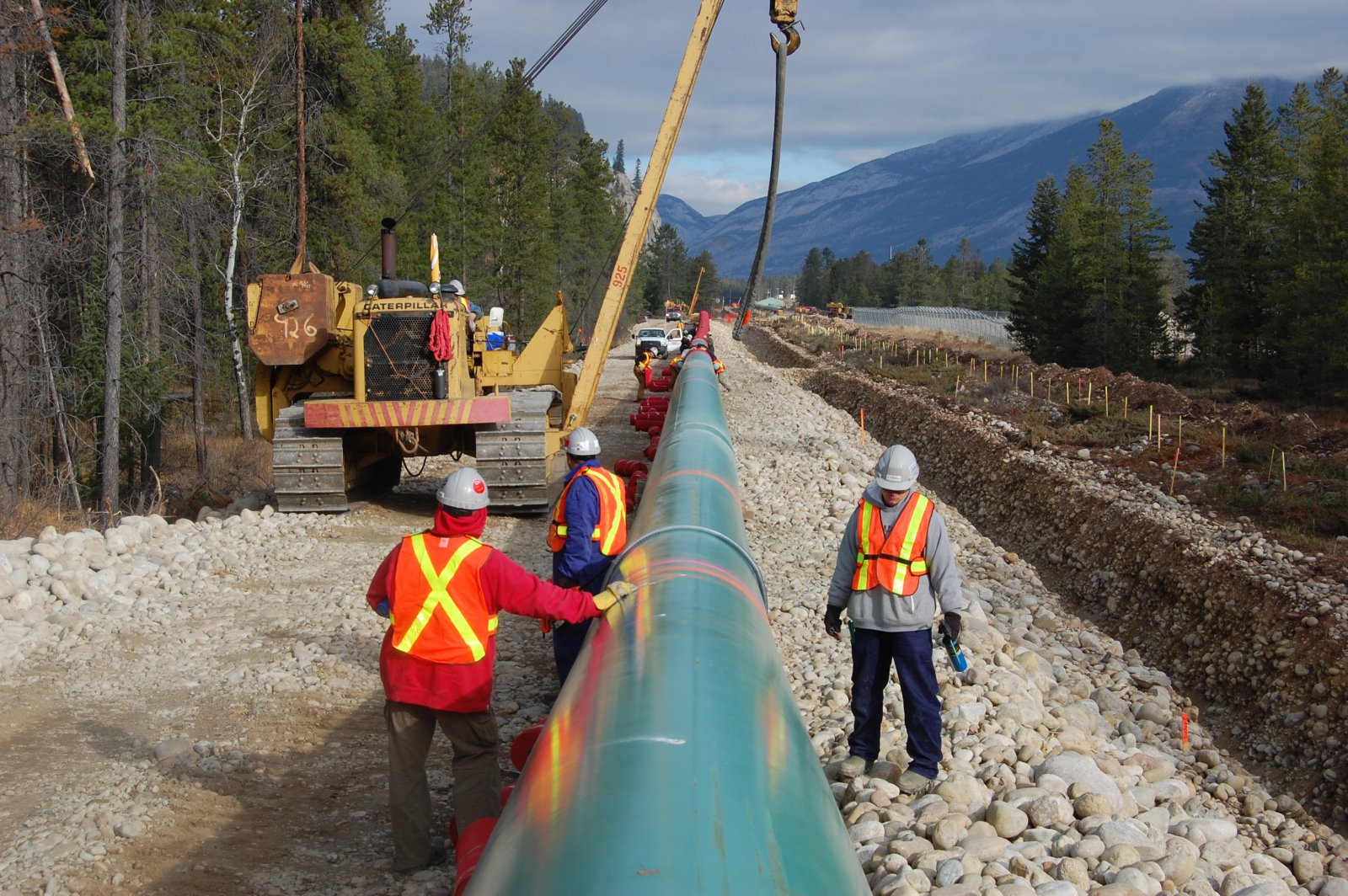 The corporation in charge of the Trans Mountain pipeline expansion project can’t say for certain its construction schedule or how much the project will cost overall.

And it has admitted that recently secured financing is only enough to cover the next few months.

Canada Development Investment Corporation (CDEV), the Crown corporation that owns and operates the pipeline and is overseeing the expansion project, revealed these details during its annual public meeting on Dec. 11, as well as in a recent financial report.

The details make clear that, despite being owned by the government of Canada and promoted by Prime Minister Justin Trudeau as being in the national interest, CDEV and its corporate entities still harbour a significant degree of uncertainty about the project’s timeline and long-term financing.

For years, the expansion project has faced questions over when it will be completed, how much it will ultimately cost and how much of that expense can be passed on to shippers via tolls.

“We’ll need more clarity on the project’s schedule before we can determine the costs,” CDEV chairman Steve Swaffield said at the annual meeting held at the Shaw Centre in Ottawa.

“A revised toll will be made public closer to the in-service date.”

Meanwhile, in a recent financial report, CDEV admitted that “financial commitments have not been obtained to finance the entire project.”

The corporation negotiated a revised credit agreement with a federal fund called the Canada Account on July 30. The loan, or “credit facility,” has a limit of $2.6 billion through the end of 2019 that will increase to $4 billion in 2020 and will mature August 2023.

But this money “should be suitable to fund construction costs for (the Trans Mountain pipeline expansion) through the first half of 2020,” the report says, after which CDEV expects to negotiate again.

“It is imperative that continued and increasing financing sources are obtained in a timely manner,” the corporation wrote. The uncertainty, it said, is leading to “continued financial and completion risk for the project.”

Noreen Flaherty, corporate secretary at CDEV, confirmed to National Observer that the credit agreement was meant to fund pipeline expansion activities “in 2020.”

“CDEV does not expect that agreement to be of a sufficient size” to finance the construction of the entire expansion project, Flaherty said.

The former owner, Kinder Morgan, originally said the construction cost was $7.4 billion, but later filed documents showing it could cost between $8.4 billion and $9.3 billion. Economist Robyn Allan has estimated the current cost has reached $12 billion.

The construction completion date has been variously cited as between 2020 and 2023, depending on how legal and other issues play out.

At the annual meeting, CDEV said work at the Burnaby and Westridge terminals had started in August, pipe is on the ground in Alberta and expected to be “in the ground by Christmas” and the company was “looking forward to being underway with construction in every (section) by next fall.”

A ‘real thing’ or a ‘multibillion-dollar subsidy’?

The expansion project will roughly triple the capacity of the existing Trans Mountain pipeline, sending up to 890,000 barrels a day of crude oil and other petroleum products from the Edmonton area to a terminal in metro Vancouver.

“We know that no matter how much people talk about information technology or cloud-based whatever, Canadian prosperity has and will continue to be driven by those who know how to build things,” Natural Resources Minister Seamus O’Regan said at a gathering of politicians in a field near Edmonton last week to celebrate construction commencing along the pipeline route.

“Real things, tangible things, things built by people, helping, in this instance, to move our resources from Alberta to new markets where they are needed.”

But critics say the expansion will put Canada’s carbon-pollution-reduction goals out of reach, and comes at the worst time, as the country struggles to deal with an advancing climate crisis.

The oil and gas sector is proportionally the largest polluter by sector countrywide, and Canada's 173 billion barrels of reserves is the third-largest in the world.

The Federal Court of Appeal quashed the government’s original approval in the summer of 2018, saying it had failed in its legal duty to properly consult with First Nations and had carried out an insufficient environmental review.

The Liberal government approved the pipeline project for a second time last June, saying it had fixed both issues. But the court agreed in September that six of 12 fresh challenges could proceed, related to the Crown’s duty to consult and accommodate, and the Crown’s conflict of interest.

The Court of Appeal is now scheduled to hear fresh legal challenges this month from Coldwater Indian Band, Squamish Nation, Tsleil-Waututh Nation and others.

“The Trans Mountain pipeline is already a massive multibillion-dollar subsidy and Canadians have the right to know how much the price has increased,” said Eugene Kung, staff lawyer at West Coast Environmental Law, in a Dec. 10 statement.

“Canadians were told this would be a profit-generating investment and the profits would be devoted to renewable energy. Instead, it’s operating at a consistent loss and it isn’t even clear the government will be able to sell it, without taking another loss of billions of taxpayer dollars.”

At the annual meeting, Trans Mountain Corporation chairman William Downe said there had been “significant progress” on the expansion project, and argued the current pipeline’s full capacity demonstrated that there was a case to be made for the expansion.

“The existing pipeline remains full each and every month, with demand from customers exceeding the capacity consistently for the past decade. This demand for space is evidence of the strong and clear business case supporting Trans Mountain expansion,” he said.

“Shippers have made long-term contract commitments ranging from 15-20 years that will underpin the cost of construction and the operation of the pipeline. The additional capacity offered by the expansion will be used to supply more crude oil and refined products to markets in British Columbia and Washington state, and to offshore markets in the Asia-Pacific.”

President Ian Anderson said Trans Mountain has secured 15- and 20-year contracts with 13 shippers in Western Canada that cover 80 per cent of the capacity of the expansion project.

“So we’re fully expanded at 890,000 barrels a day, 80 per cent of that capacity is fully contracted for 20 years. The remaining 20 per cent is available to shippers to access on a month-to-month basis,” he said.

“Long-term financial security for the asset is very well-established with those long-term contracts, and the tolling mechanisms within them.”

The new loan was handled by Export Development Canada (EDC), another Crown corporation that provides support for Canadian exports. Canada Account transactions are administered by EDC, but taxpayers ultimately assume the risk; they are deemed by cabinet to be in Canada’s interest.

Andrew Stafl, vice president of finance at CDEV, confirmed the third-quarter statement from the corporation corresponds to the Canada Account loan agreement, and replaces an earlier one signed on Aug. 29, 2018.

Stafl also confirmed that another transaction, a loan guarantee that the pipeline had with Royal Bank of Canada and TD Bank, was no longer active.

Ottawa's sustainable-development policy is a mess, a new report says

-- the stated six appeals before the courts, one of which is BC's original reference case now before the Supreme Court of Canada which will start hearing submissions early in the New Year (in part based on the Constitutional rights by Indigenous intervenors who were ignored by the BC Court of Appeal);

-- well over 100 billion dollars committed so far by the world's largest car makers to retooling for electric vehicles and who plan to introduce millions of EVs en masse to world markets in just five years, bringing prices down as supplies increase;

-- the increasing worldwide pressure to act against climate change through policy and the swelling voting power of youth;

-- ever larger parts of the world financial system moving out of fossil fuels in general, and the oil sands and coal in particular;

-- and the utter vacuum of any professional-level form of risk assessment regarding oil spills on the BC Coast, and therein the potential for billions in damages through international lawsuits;

... the long term financial security of Trans Mountain can certainly NOT be guaranteed.

It's a wasteful subsidy to a

It's a wasteful subsidy to a dying industry........but hey! It's a form of 'equalization' right wing Albertans can get behind.......understanding that if we let it proceed we'll be wasting public tax dollars is an insight the tax whiners of certain jurisdictions won't be able to get their heads around.

Wasting money on health and education across this nation is anathema to many; throwing good money after bad for ramped up bitumen production is the way to do it....petro states see that as a good investment.

The bulk of oil and its'

The bulk of oil and its' products are not spent in car gasoline. In fact, the condensate from which car gas is made is a surplus to the process and cannot be injected back into the ground as it will only recirculate back up reducing the amount of usable oil.

The Balkans in the US had an unexpected high content of condensate and the US had laws against exporting it which, created a dilemma. "Suddenly it became exportable and Mexico signed on for the bulk of it so they are now able to produce high-grade gasoline and aircraft fuel.
Products which are needed are utility oils such as heating oil, P40 and P50 for fueling trucks and trains and to some extent the manufacture of plastics and cloth as in nylon. Home heating oils use more than cars do by a long shot.