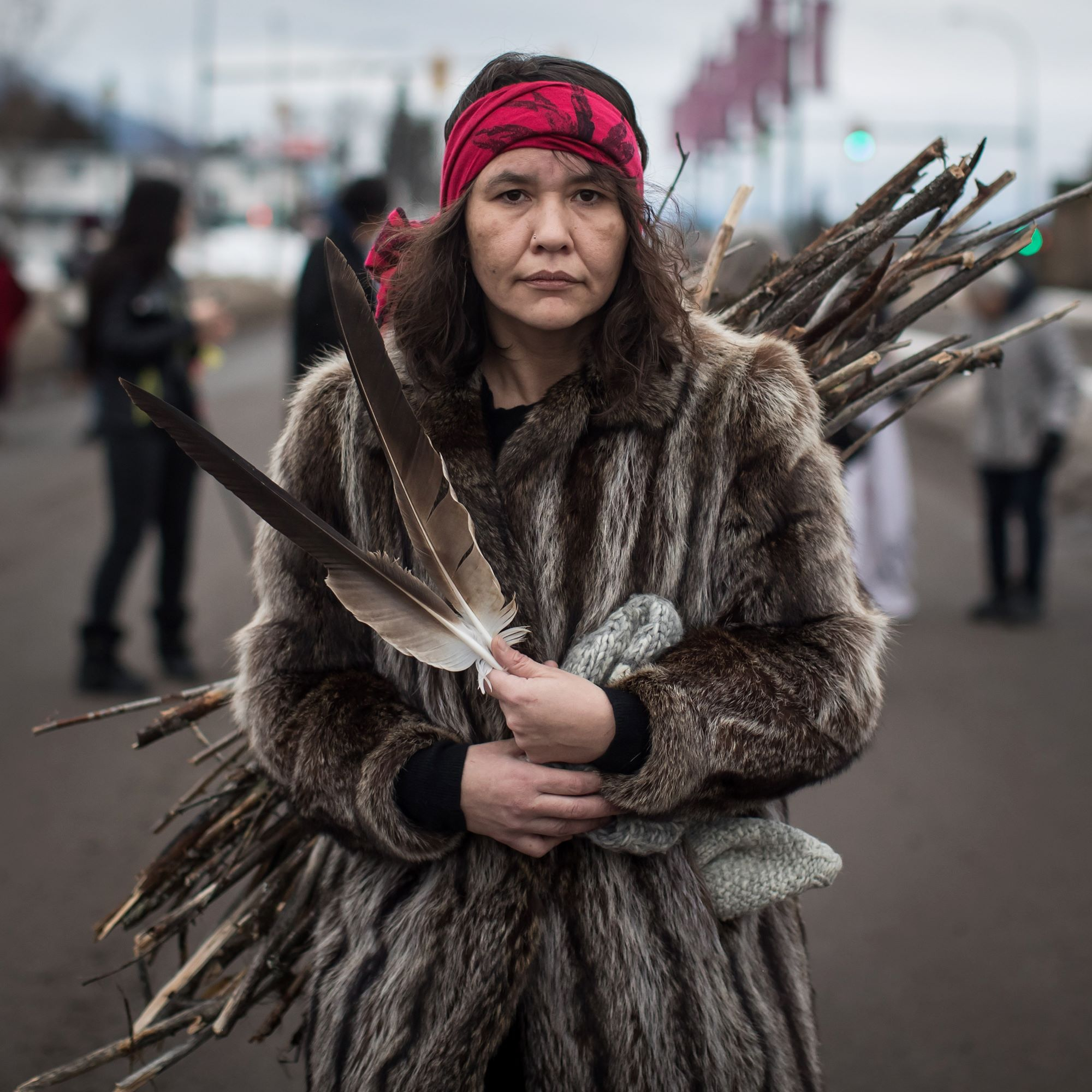 Kumgayaz Dennis, a Dakelh woman from the Lheidli T'enneh First Nation carries wood to be burned in a sacred fire in support of the Wet'suwet'en Nation protest against a BC natural gas pipeline. Photograph The Canadian Press - Darryl Dyck
Previous story
Next story

The final report of the Missing and Murdered Indigenous Women and Girls (MMIWG) Inquiry released on June 3 outlines 231 recommendations for addressing the ongoing discrimination and violence targeted against Indigenous women in Canada. The detailed report diagnoses patriarchy and colonial-governance systems as root causes.

The government response to MMIWG is to improve support services. While these initiatives are important, they will not elicit the broader structural changes that are necessary to improve the wellbeing of Indigenous women and Indigenous Peoples as a whole.

At the same time, Indigenous women in Canada and abroad are on the front lines of land and water defence. Typically, they are the first to be impacted by resource extraction in their territories, whether through exposure to polluted water in their domestic work, food harvesting or sexual violence that -- as has been well-documented -- spikes whenever “man camps” to exploit resources are established.

Thus, Indigenous women are also deeply mindful of their contract with non-human life inherent in their Indigenous knowledge, which contributes to the protection of humans by also protecting the very earth itself.

In Indigenous knowledge systems of governance, human relations of accountability and responsibility extend to land and water as sources of food and lifeways. This fundamental human relationship with land is overlooked by western governance systems, which are grounded in legal concepts of property and commodity and by which ownership of land is regarded as a necessary premise for asserting sovereignty.

Therefore, the common Western prescription to Indigenous wellbeing is economic prosperity by way of jobs associated with resource projects that are often not sustainable. More importantly, this approach assumes a solution without consulting the broader Indigenous community, including women who are often overlooked during formal negotiations between state and Indigenous leadership, which most often is male-dominated.

It is important to note that Settler-state colonialism is embedded in patriarchal power relations that are often internalized in Indigenous politics. Until very recently the Indian Act denied Indigenous women the same rights to Indian status as it gave to men. This form of contemporary colonialism has propelled Indigenous women land and water defenders, both in Canada and in the Global South, toward finding ways to amplify their witnessing and connect with one another to broaden their learning and power.

The most recent development is the launch of a digital platform developed by the ecumenical movement for ecological justice and human rights, KAIROS Canada. The platform, called Mother Earth and Resource Extraction– or MERE Hub, compiles material to support research and advocacy that calls attention to the impacts of resource extraction on communities, particularly on women. It is in response to the alarming rise in reported criminalization, harassment and violence against land defenders by law enforcement and private security personnel and actors linked to the extractive sector, quite often the subsidiaries of Canadian companies.

In 2018, communities impacted by Canadian mining celebrated when the Canadian government announced the creation of the Canadian Ombudsperson for Responsible Business Enterprise (CORE), billed as the first of its kind in the world. The position promised to hold Canadian mining companies and their subsidiaries, as well as the oil and gas and garment sectors, accountable for human rights violations at their overseas operations. Unfortunately, a year after the position was filled it was evident that it was no more than a powerless advisory post, unable to compel documents.

Canada must stop its empty promises and do the hard work of dismantling systems that harm marginalized people and the environment and prioritizing the rights of humans and nature. It can start by empowering CORE using an intersectional and gender-based-analysis approach from an Indigenous feminist perspective to help inform implementation of the recommendations of the MMIWG Inquiry.

Indigenous women are also deeply mindful of their contract with non-human life inherent in their Indigenous knowledge, which contributes to the protection of humans by also protecting the very earth itself.

Such an approach will be strong medicine for a system toxic to women and the planet.