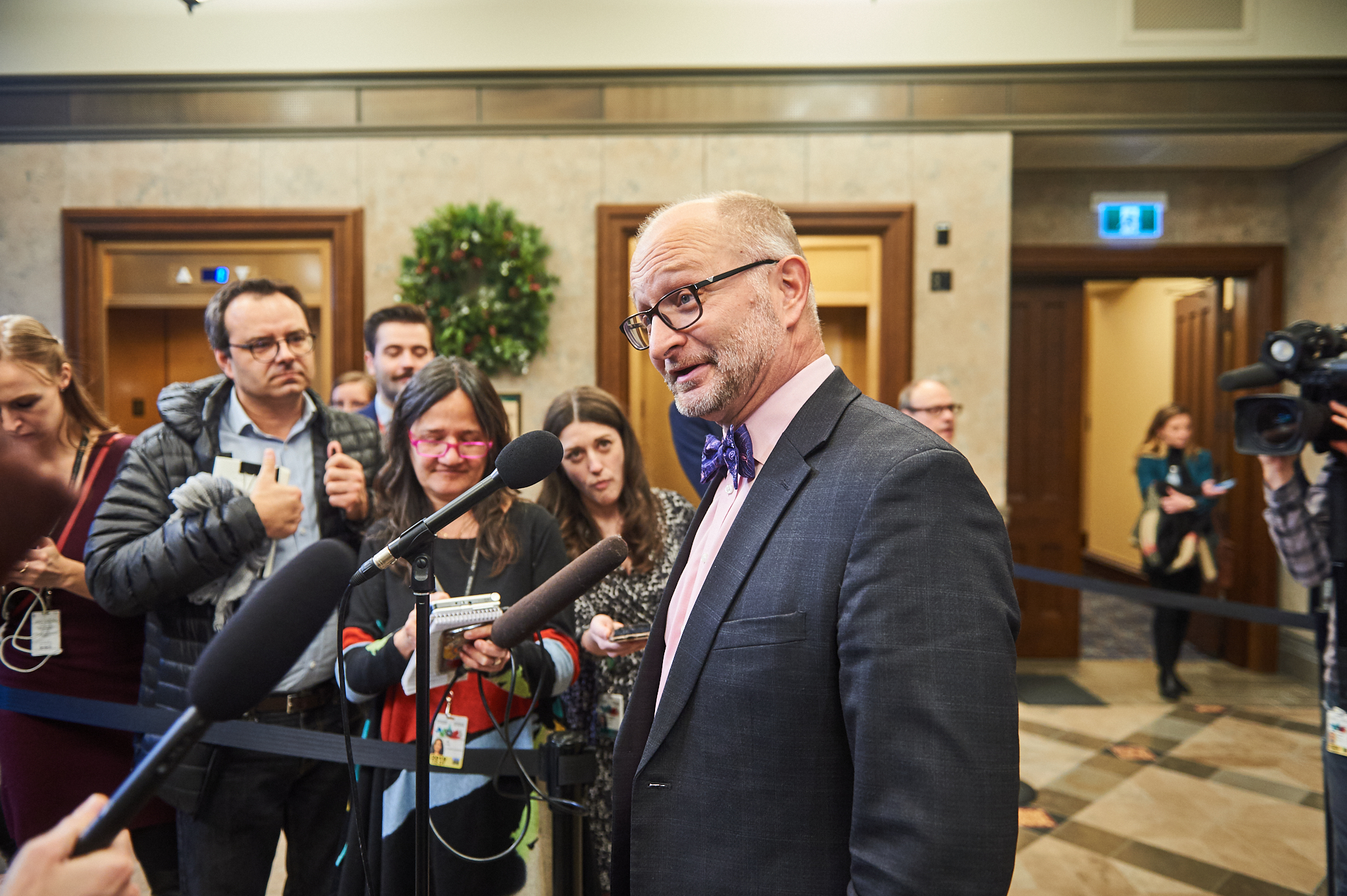 Canada has denied that scientific reviews of oil-spill research were suppressed during Trans Mountain oil pipeline consultations, and accused Tsleil-Waututh Nation of being “misleading” and throwing out “baseless accusations."

Attorney General of Canada David Lametti has argued in a memorandum of fact and law submitted to the Federal Court of Appeal and obtained by National Observer that the reviews in question were "internal notes," not actual scientific peer reviews.

While the government did not deny another key argument from the First Nation — that the reviews had been altered between a draft and final version — the memo said these alterations were just "part of normal departmental review and approval processes."

Tsleil-Waututh Nation (TWN) “engaged in a pattern of making baseless accusations of wrongdoing” against elected and federal officials, Lametti’s memo reads. “These accusations were not only vexatious and untrue, they further delayed progress on substantive dialogue as Canada was forced to address them.”

Canada is addressing arguments this month from TWN, Coldwater Indian Band, Squamish Nation and others presented at the court in connection with the Trans Mountain expansion project.

The court is focusing on the government’s reinitiated consultations with First Nations, which were launched after an earlier court decision had quashed the approval of the pipeline in August 2018. The court had found that the federal environmental review was flawed and the government had not upheld its constitutional duty to adequately consult with First Nations affected by the project.

A lawyer for TWN had argued Monday that Canada had commissioned secret “peer reviews” of expert reports on oil spills that had been presented to the government, and federal officials only handed them over in late May, after consultations had wrapped up. TWN and other First Nations said in their own memo to the court that “Canada suppressed and altered the peer reviews.”

According to that memo, the documents showed that government scientists had agreed on a central issue raised in one of the expert reports — that diluted bitumen, a heavy oilsands product that’s been blended to make it flow through pipelines, would sink in freshwater in a matter of days, making it harder to clean. Instead, they said Canada maintained a view during an April meeting that diluted bitumen would take much longer — two to three weeks — to sink.

Lametti’s memo turns the tables on TWN, suggesting it was actually the conduct of the First Nation, not Canada, that “hindered the consultation process.” It dismisses the story of the peer reviews being suppressed and altered as “one of TWN’s unfounded allegations,” and challenges the First Nation to provide evidence to the court to support its claim.

“Canada did not suppress information from TWN,” Lametti’s memo states plainly. “To the contrary, Canada voluntarily shared internal notes that were prepared to allow for Canada’s engagement on diluted bitumen issues during the consultation meetings. These documents changed as time went on as part of normal departmental review and approval processes.”

Lametti’s memo goes on to argue that the documents were “simply notes intended to inform the consultation team,” and therefore should not be treated as actual scientific work by outside scientists to validate the findings of the expert reports. “TWN misleadingly calls them ‘peer reviews,’” the memo asserts.

“To the extent that TWN is relying on any of these matters as a basis for alleging that Canada’s consultation was flawed, they should be discounted.”

The expansion project, now being built by Canada through a Crown corporation, would nearly triple the capacity of the existing pipeline system, to transport up to 890,000 barrels per day of bitumen and other petroleum products from Alberta to a marine terminal in metro Vancouver.

Supporters say it is central to boosting economic growth and will give the government new revenues to fund a desperately needed low-carbon-economy transition. Critics believe the project will push Canada's climate change goals out of reach, and say the risk of oil spills damaging the environment and wildlife is too high.

Prime Minister Justin Trudeau re-approved the pipeline expansion project on June 18, 2019, saying that the government had listened and responded to the concerns of dozens of Indigenous groups.

On Tuesday, National Observer asked Environment and Climate Change Minister Jonathan Wilkinson at an event at the University of Calgary whether he felt that altering the reviews in question was a concern.

“We took into account all of the relevant scientific-related reports, with respect to all elements of the project, before we took the decision to approve the project a second time,” Wilkinson said in response.

Wilkinson was in Alberta this week to meet with academics and experts focused on balancing the Trudeau government's twin goals of continued fossil fuel extraction with cutting carbon pollution to net-zero by 2050.

“The discussions around soliciting the input and active engagement in consultation and accommodation with First Nations communities up and down the proposed pipeline were deep and exhaustive,” the minister said.

“Having been part of that process, in my previous capacity as minister of fisheries and oceans, I would tell you that we went to enormous lengths to do that, we listened very carefully, we worked to respond to the concerns that were raised. And I do believe, as I think the government said at the time, that we have discharged our duty to consult and accommodate.”

— with files from Sarah Lawrynuik

Thank you for the follow-up

Thank you for the follow-up to the previous story about this topic. It seems that ECCC will require close monitoring. BTW the same Scientific Integrity policy that binds the government and its PIPSC scientists in a contract to not alter the science, also allows the scientists to speak directly to the media, without interference. Just saying.

So is it true that it will

So is it true that it will take only a few days, rather than weeks, for the spilled bitumen to tar whatever part of the ocean-bottom it reaches?

Just to note, the report was

Just to note, the report was that dilbit would sink within a few days in fresh water. It would take a bit longer in salt water, dunno what tests they did on that.

I wonder just how naive

I wonder just how naive federal government ministers, & bureaucrats think Canadian voters are?
THEY have a centuries long history of bamboozling First Nationas people with specious treaties that they abrogate without let or hindrence and THEY expect the First Nations and Canadian citizens with no axw to grind or animus against First Nations, to believe their rationalizations.

Of course they may not have been "proper" peer reviewed documents - but they certainly reveal continuing efforts to obfuscate scientific concerns, doubts, cautions about the transport of dilbit and the harmful effects of spills.

Such discourse is productive of nothing but justifiable cynicism toward political motives - and in particular, this somewhat emasculated Liberal government's desperation to get this pipeline built "so pipeline revenue" can be used by Canada to invest in clean technology and make the just transition ..blah, blah, blah. The only significant part of the preceeding is "pipeline revenue" !

The government, if they are

The government, if they are paying attention to matters in Australia, should be grateful for any delay to this dreadful pipeline project, and the damage it will cause, which will be the stinking albatross to hang around Trudeau's and the Liberals' necks for all time. Australia is going up in flames, heating record heat, seeing firefighters die, and homes burn. We've experienced this too in Canada. It is known that this kind of devastation will inevitably occur more widely, more frequently, and more unstoppably, as our climate heats. Mr. Trudeau and his government, if they continue to ignore the IPCC report and warning about the need to reduce emissions at a 7% per year clip for the next decade, will be the authors of our children's fates, and their own children's losses. We will not forget, nor forgive. The science is clear and the science has been repeatedly reported, globally, with helpful summaries for policymakers leading up each IPCC report, so that men like Mr Trudeau, and Mr Morrison in Australia (or was that Hawaii) can not miss the importance of urgent comprehensive evidence-guided action to reduce fossil fuel dependency.

There is no excuse. Money is not a good enough reason to destroy the environment we all depend upon for our lives.

50 more years of bitumen extraction, dilution and pressurized push through pipelines to our west coast is a guaranteed extinction project, regardless of whether government documents were peer reviewed or 'working notes'...........it's all a show process, with a guaranteed conclusion. We should have ended fossil fuel subsidies, as we promised to do in Paris....instead, we doubled down on them by buying a pipeline no one else wanted.........not even the owners.

Now we're being told the revenue from this black snake will go to transitioning off the junk? And we believe it? Recently we were told bitumen wouldn't sink at all in salt water......some fossil fuel lab had cooked up data to convince us of that. Currently, I'm hearing mad claims that the major oil companies are hard at work finding a way to produce tar without any greenhouse gas emissions!!!

Big Oil and their bought politicians must think we're morons. Ten years to cut emissions caused primarily by fossil fuels and we bought a pipeline that guarantees the tripling of bitumen production for the next 50 years? In order to fund the transition we could be funding today with those fossil fuel subsidies (over 30 billion a year according to a IMF report a few years old) we can't work up the courage to end???

Why do we still treat any of this gong show with any kind of respect at all...........time to warm up the real tar, collect the real feathers, and give a few suits a reality check.