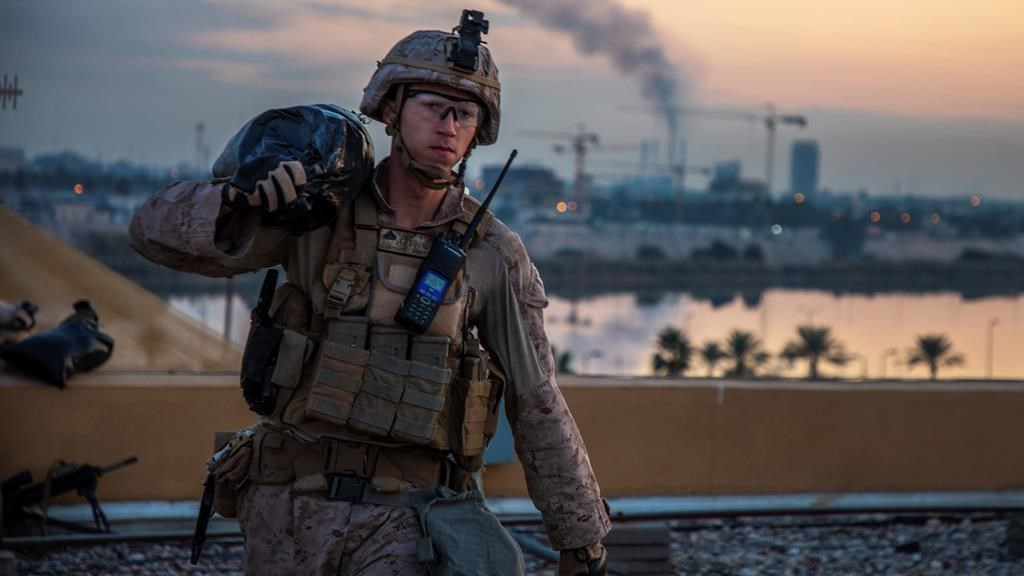 In this photo, released by the U.S. military, a U.S. Marine with 2nd Battalion, 7th Marines, carries a sand bag during the reinforcement of the U.S. embassy compound in Baghdad, Iraq, on Jan. 4, 2020. U.S. Marine Corps photo by Sgt. Kyle C. Talbot via AP
Previous story
Next story

Canada is closely monitoring developments after Iraq's parliament called for the expulsion of foreign troops from the country, a spokesman for Defence Minister Harjit Sajjan said.

But Sajjan's press secretary, Todd Lane, would not say whether contingency plans are in the works for getting Canadian military personnel out of Iraq should the situation there deteriorate further.

Iraqi lawmakers approved a resolution Sunday asking the Iraqi government to end an agreement under which American and allied forces have been in the country for more than four years to help fight the Islamic State group, also known as Daesh.

The bill is nonbinding and subject to approval by the Iraqi government but has the backing of the outgoing prime minister.

The Canadian-led NATO training mission in Iraq has been temporarily suspended in the wake of the killing of Iranian Gen. Qassem Soleimani.

The training mission, currently led by Maj. Gen. Jennie Carignan, has been under Canadian command since it was launched in October 2018 at the request of the Iraqi government.

A U.S. airstrike Friday killed Soleimani and a number of top Iraqi officials at the Baghdad airport. Soleimani was the architect of Iran's proxy wars across the Mideast and was blamed for the deaths of hundreds of Americans in roadside bombings and other attacks.

"We continue to monitor and evaluate the situation, and remain in close co-ordination with our international partners," Lane said in an email Sunday.

"Our goal remains a united and stable Iraq, and preventing the re-emergence of Daesh."

When asked, Lane would not divulge whether Canada had plans to remove its soldiers from Iraq.

"We won't have a further comment at this point," he said.

Canada has 250 military members working with the NATO training mission as well as dozens of special forces troops who have been working in the northern part of the country with Iraqi security forces.

Tensions in the Middle East have escalated since the air strike with both U.S. President Donald Trump and Iranian leaders trading threats of retaliation.

Those tensions are also now being felt in Canada with a group representing Islamic Americans reporting that dozens of Iranians and Iranian-Americans were detained at length and questioned at the Peace Arch border crossing linking British Columbia to Washington State.

The Council on American-Islamic Relations said many more were reportedly refused entry to the United States, including many with U.S. citizenship who were returning to their homes in the United States from an Iranian pop concert that took place on Saturday in Vancouver.

"Those detained reported that their passports were confiscated and they were questioned about their political views and allegiances," the council said in a statement posted online.

The statement quoted a 24-year-old American medical student who said she was detained and interrogated for more than 10 hours. Email and phone messages sent to the council went unanswered.

A spokesman for Border Security Minister Bill Blair said the Canada Border Services Agency "has no involvement in the matter."

This report by The Canadian Press was first published on Jan. 5, 2020.

With files from the Associated Press.